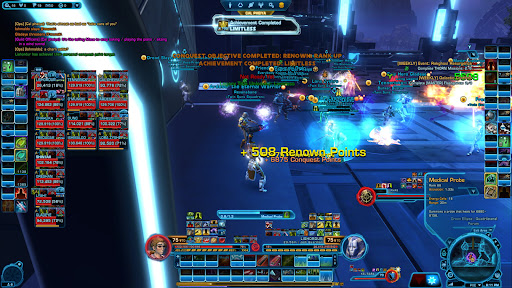 I'm making good progress on my pre-expansion goals: My pacifist character hit level 75 a couple of weeks ago, and on Halloween night, a full month ahead of my original schedule, my main hit Renown rank 999 and earned the Limitless achievement. It was pretty well timed as well, as it happened in the middle of a Dread Guards 16-man master mode kill (you get Renown each time one of the bosses dies), which made it extra memorable. 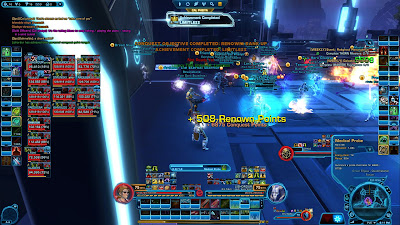 Also, I'm very glad now that I made it a personal goal for myself to get this done before the expansion, as another one of last week's bombshell announcements included the bit of news that Renown will be completely removed in Legacy of the Sith. Several of my guildies have been scrambling to also quickly get the achievement now before it goes away forever, but depending on their current progress there might not be enough time left to grind out the remaining ranks on a sane schedule. I think most people expected that Renown ranks would be reset with the expansion, but not a complete removal of the system.

I can't claim to be hugely upset by this move - Galactic Command as the sole source of endgame gear was a nightmare, but once Bioware rebalanced it to be more supplementary than anything else, getting reward boxes for a sort of infinite levelling was kind of nice. When GC turned into Renown with Onslaught, it was nerfed so heavily though that the reward crates became only another piece of junk to deconstruct every so often; I don't recall getting a single interesting thing from them all expansion. If anything, I'll miss the concept of endless levelling more than anything else. I first saw and learned to appreciate it in Neverwinter, but they eventually got rid of it too...

Other systems on the chopping block are social points in their current form and the dark vs. light system as introduced in Knights of the Eternal Throne (not to be confused with the original character alignment system).

There's still going to be a social system of sorts, but instead it's going to count how many runs you've done in the group finder, similar to World of Warcraft, which is... meh. I always liked the idea of social points being awarded for more than just taking part in group conversations (and you did use to also get them for things like handing in quests as a group), but tying the system to the group finder leaves a bit of a sour taste in my mouth, as it just limits it in a different way. Now you'll be able to level up doing quests with a friend without being considered social, and I'm not sure that's an improvement!

I don't mind the group finder and I understand Bioware wanting to incentivise it, but from what I remember in WoW, the people who were flaunting their group finder achievements were usually the most impatient and obnoxious players of all to get in a pug because they were only after the achievement and nothing else. Let's hope that SWTOR's community is different enough to withstand that kind of pressure.

Finally, the galaxy-wide dark vs. light system... I guess it had a good run. I did kind of like the way I could use the state of the galaxy as the tie-breaker for which alt to play when I was unsure, and I had my fun hunting down all the dark vs. light world bosses with my guild last year, but I never liked the forced personal toggle and how it made it impossible to have a neutral/grey character anymore unless you constantly flip-flopped between both sides. Still, it doesn't sit quite right with me to see something like that just get removed with no replacement. The forum post said they're planning to reintroduce the world bosses at some point, but who knows when that will be...

I do feel Bioware has been holding out on us a bit, waiting until so shortly before the expansion launch to tell us all this stuff. I mean, I guess it's still better than not finding out until it actually goes live, but still. I wouldn't go so far as to call something like the removal of Renown "bad news", but it's not really good news either, and at least to me it just feels like an unnecessary dampener on everyone's expansion hype.