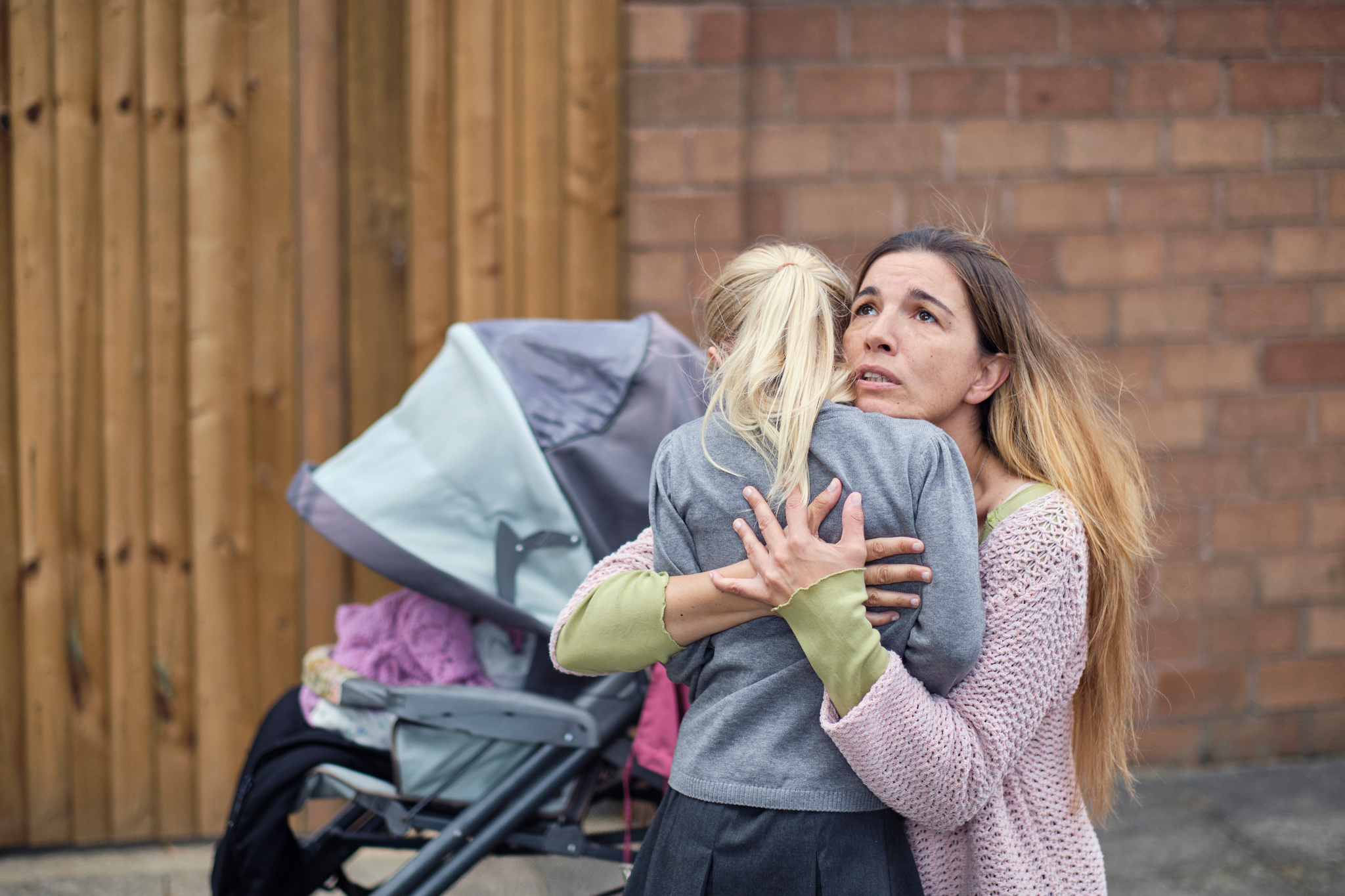 ‘Listen’ is a testament to the fact that film can be a powerful medium for challenging the unjust treatment of immigrants in our world today. Bela (Lúcia Moniz) and Jota (Ruben Garcia) are two Portuguese immigrants living in London with their three children, Diego (James Felner), Lu (Maisie Sly) and baby Jessy (Kiki Weeks and Lola Weeks). Lu has a platelet disorder which manifests as spontaneous ‘skin purpura’. She is also deaf and communicates using sign language. Jota works in a timber yard under a zero-hours contract, and Bela is a house cleaner. To say that this family is struggling financially is an understatement. Bela is juggling a grilling work routine with motherly duties which makes her turn up late in collecting Lu from school on a few occasions. When Lu’s hearing aid is broken in an accident, a series of safeguarding alerts are triggered by social services. Things escalate rapidly and a rushed ruling deems Bela and Jota incapable of caring for their children. Diego, Lu, and baby Jessy are taken into social services’ custody and are given up for adoption. It is here when Bela and Jota’s tragedy unravels; they are repeatedly viewed as unwelcome poor immigrants who are exploiting the health and social care system in the UK. They are ‘guilty’ till the contrary is proven.

In the brief time Bela and Jota are allowed to see their children in custody, communicating in Portuguese or using sign language with Lu is seen as ‘defying the system’, and passing secret messages to their children! The rules of parental visits must always be followed; all exchanges must be in English. The onus falls on the parents to request interpreters if they want to talk to their children under the watchful eye of social workers. The social workers’ main duty is to ensure that nothing unlawful takes place between children and parents. It must be noted that the film portrays some social workers who do not approve of such discriminatory practices; Anjali (Kiran Sonia Sawar) understands the plight of this family and provides them with valuable information to fight the system. Ann (Sophia Myles), another social worker who left the establishment, steps in to support Bela and Jota to claim their children back. Ann provides them with legal advice and covers up their tracks when they are forced to pursue unorthodox measures to reconnect with Diego.

Which side Anna Rocha de Sousa, the film director empathises with is obvious, however she also shows how an immigrant family can be pulled into a vicious cycle by resorting to emotions and subjective pleas when challenging a rigid system. This system operates by rules where ‘family love and compassion’ do not count as ‘objective evidence’.  In a ‘David and Goliath’ battle, one must be well- prepared with all the right weapons. Shouting and crying will not deter police officers or social workers from doing their job. The legal system operates under similar rigid practices; once a ‘forced adoption’ ruling is made because the biological parents are ‘incompetent’, their children can be taken into foster care without their permission. Such rulings are very hard, if not impossible, to reverse.

There is a scene where Bela implies that the rules for foster care and adoption are easy and discriminate against biological parents. It might represent the emotional viewpoint of a traumatised mother, but it could also be viewed as a sweeping generalisation of a statement incriminating the whole agenda of ‘foster care and adoption’ in the UK. Here the reviewer would disagree with such polar judgments.

The film’s call for justice is told with palpable authenticity; Lu is played by Maisie Sly, who is deaf in real life, and appeared before in the Oscar-winning short film ‘The Silent Child’.[1] The lead actors, Lúcia Moniz, and Ruben Garcia, excel in portraying the agony and frustration of immigrant parents fighting an unfair system. As the horrific events befalling this family accumulate, it becomes clear that Lu is not the only deaf individual, government systems can be deaf too. The film’s title ‘Listen’ carries a plea to all parties involved; we could all do with a bit more of ‘listening without prejudice’.

The post Listen without Prejudice appeared first on Medical Humanities.