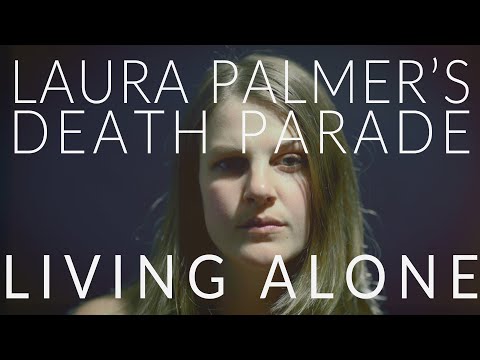 Singer-songwriter, guitarist, doom metal harmonist, highway enthusiast, full-moon-wary Laura Palmer is the artist alter ego of the talented Laura Hopkins. A founding member of the female fivesome Blackwater Holylight, and the namesake of Laura Palmer’s DEATH PARADE, her latest release Bricks of Ivanhoe (recorded without her usual collaborators) is a five song EP that manages to triumph over the seven stages of grief.

The EP is sure to leave you wanting more, but don’t fret—there is plenty of new music on the way for, in her own words, “People who like listening to music at different volumes.” (AKA fans of each of her projects have something to look forward to.)

Regardless of one’s preferred decibel range, the emotions and sentiments of Laura’s music will find their way under your skin. And you’ll be glad, because their resonance is proof that the burden of being is a burden shared.

ELEVEN: The first test of the local feature: are you a Pacific Northwester?

Then before that, I just kinda cruised all over America in an RV with my mom and my brother.

LP: Not at all. She never had music on in the car. Never had any sound. She would drive for hours with no music on… so weird.

LP: Books on tape. So much Harry Potter.

11: When and why did you start playing guitar?

LP: I grew up playing piano—my dad plays. I think I was ten when I got a guitar and I just taught myself. I learned a lot of finger picking stuff that was really soft because I didn’t want anyone to hear me. Playing louder came later.

11: Were you thinking about being a professional musician back then?

LP: There was no goal behind learning guitar. It was more like an emotional release of sound. I just wanted to make sounds. I had to, so I kept on learning more and more chords.

LP: Yeah. I’ve never really had normal jobs. I used to work at a traveling pizza company that would work at music festivals. We would hitchhike to each musical festival—Coachella, Bonaroo, Electric Forest—make pizza and catch some of the shows. And I remember not doing music, but being around it, being like: “Damn I wish I could just be doing the music part and not making all this friggin’ pizza.”

11: You sing in two bands; how did Bricks of Ivanhoe turn into a solo release?

LP: I think of Bricks of Ivanhoe as a session, and that’s why I wanted to call it something different than Laura Palmer’s DEATH PARADE. With DEATH PARADE, I really want it to be more of a collaboration of minds with the people I play with. These songs feel more personal and rooted in a ‘me’ emotion. I wanted to release Bricks of Ivanhoe to have it out there and move on to doing other things.

11: There’s a raw, intimate quality to these recordings.

LP: I like to record live and to try and just do one take of something. You know if something falls to the floor, or if you hit a wrong note, that’s just what it is—that’s just part of the experience. Bricks of Ivanhoe was live except for the harmonies.

LP: It made sense to include it with this batch of songs since they’re all pretty relationship based. The first recording of “Apartment Divorce” I did by myself with the microphones I had. This was more wanting to go to a studio and get a clearer vocal sound and basically to have as a learning experience so I can slowly get to where I want things to be eventually.

11: Did you discover anything in the process of revisiting the song?

LP: I originally wrote that song about my best friend’s relationship. It was based solely off what she had experienced. And then I went through pretty much the same thing and I was like, “Wow, this song is really relatable now to my experience” (laughs). In the beginning I was singing about her, but now I’m singing about myself.

11: Did writing without your other bands in mind affect your songwriting process?

LP: The song “The Type” has chords I would never pick normally. They’re all kinda major-y and not the kind of stuff I’d want to use with DEATH PARADE. I really like the lyrics in it but… the chords are so happy sounding. To me that song is: “Okay so I wrote a song with major chords, it’s done, I never have to do it again.”

11: Are you planning a solo tour for these songs then?

LP: I think so. I definitely love driving by myself and having something to share and connect with other people.

11: When you drive cross country do you drive the speed limit?

LP: It depends… I drive in a really small car and in the beginning of my last tour I was definitely going 90mph because I was excited. But my tires got bald very quickly and then I was driving 55mph in the middle of Utah because they didn’t have tires the size of my tiny car.

11: How do you feel about hitting bugs with your car?

11: Do you enjoy being an artist in the Pacific Northwest?

LP: It’s beautiful. Not too hot. There are lots of resources here—especially for artists, for healthcare and things… but it’s been hard to get housing and also be an artist, because music doesn’t really support you. Our practice space got sold to be turned into condos and that just kinda seems to be what’s happening. I like the community of artists here. People are still doing it, people are still making it work.

11: Do you make any other art? What sorts of things inspire your songwriting?

LP: I used to dance and was part of a company, so I feel like rhythms and movements are a really important thing for me with writing—feeling out where different melodies can be reached in your body. A lot of DEATH PARADE is written in 3/4 because of the sway that I enjoy. Playing and experimenting with piano too… and driving—making music to stare out at a road that’s going out forever and having time to think about everything.

11: How do you find balance between Blackwater Holylight, DEATH PARADE, and Laura Palmer?

LP: It’s definitely a balance. The chemistry I have with Blackwater Holylight is incredible. It’s something rare and special to have a group of five women working together and processing vulnerability and being told to be quiet and then coming into a scene and being loud. But after 3 months of touring, my ears need to balance that out.

Playing with DEATH PARADE provides a different release—it’s got more of a sway and that’s super needed too. It’s about the experience of playing music and sharing emotions rather than what you’re supposed to do with a band if you want to be pushing it with labels. It’s also just nice to have a band that isn’t limited by deadlines.

And then the solo stuff, Laura Palmer is… I try to make it as quiet as possible. (laughs)

11: What can people expect from your shows?

LP: Blackwater Holylight is… fuzzy. Heavy. Loud. Like, if you like to listen to music without ear plugs you might come to my solo show. Some nights of DEATH PARADE are a little bit quieter, but it’s very mood based. If I’m in a mood, or if we’re in a mood, it’s gonna be louder. If not, it’s gonna be chill.

11: How are the moods determined? Tarot?

LP: I think it’s determined by moon cycle. Just being a woman, my body tells me how to feel.

11:  I’m not going to claim to be an expert. But if the moon can control the tides and people are like 60% water… that’s all the proof I need.

LP: I don’t go out when it’s a full moon. I don’t go to the bar or anything because I know and I’ve seen that people get more crazy.

11: What’s one of the best parts about performing music?

LP: Inspiring people to make art, because everything else is just a Capitalistic sack of shit. It’s not real. I want to remind people that the days that they’re experiencing are the most incredible thing—being alive.

LP: People have ideas about people who make music: that rock stars and musicians are somehow different for everyone else. But they’re not, they’re just people living their lives and music is just what they happen to be doing.

I hope someone thinks, “I’m a bedroom recording artist totally afraid of everything and I want to make music,” so I can be like, “You can do it! Go do it! Cause, what else are you doing?”