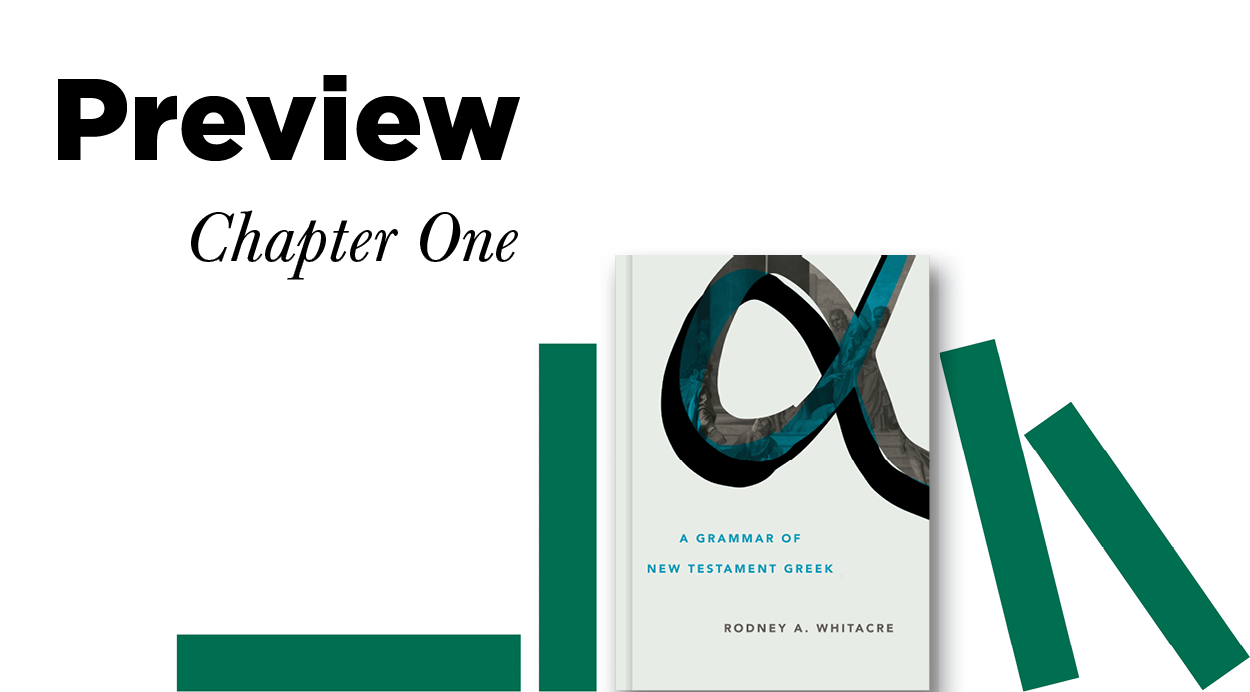 Look Inside! A Grammar of New Testament Greek 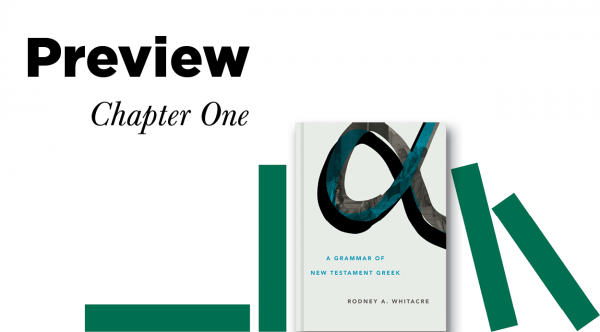 Today, we look inside Rodney A. Whitacre’s forthcoming book, A Grammar of New Testament Greek (Nov. 11, 2021). This book is an indispensable source as both a textbook and as a reference for all Greek New Testament readers.

A Grammar of New Testament Greek is available for pre-order at Eerdmans.com, Barnes & Noble, ChristianBook.com, and Amazon.com.

A complete table of contents is available here.

This chapter begins with material that is important to learn at the outset of a Greek course, followed by several related topics that can be learned as they are met in reading. The final section is included for those who wish to use one of the alternative forms of pronunciation.

There was no one way to pronounce Greek, any more than there is one way to pronounce English. Some elements of Modern Greek were already present among the dialects in the fifth to fourth centuries BC, including Attic Greek associated with Athens, often referred to as Classical Greek (CG). Other elements of Modern Greek appeared in the Hellenistic period in which Koine Greek (KG) developed, mostly from Attic Greek.

Throughout these periods and those that followed there was no uniform way to pronounce Greek.

The upper-case forms are used infrequently and can be learned as you encounter them. 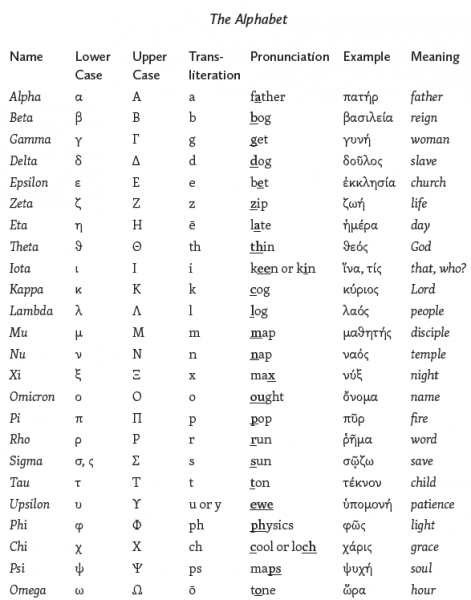 When two vowels are pronounced together as one sound they form a diphthong. 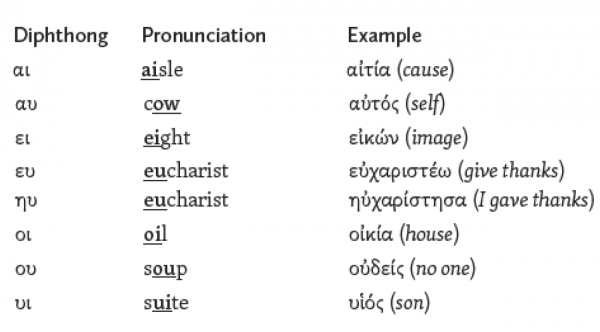 At one stage ευ was pronounced as ε followed quickly by υ with a constricted pronunciation. Together the diphthong sounded like the “ell” in the Cockney “bell”; ηυ was pronounced similarly, but with an initial sound more like its η, Beowulf. This pronunciation was a stage on the way to Modern Greek “eff ” and “ev” for ευ and “eef” and “eev” for ηυ (§1.13). Often in Koine courses both sounds are given as “eu” in “eucharist” (AGG §2b). For reading purposes any of these options is fine.

A vowel at the beginning of a word has a mark over it indicating whether an “h” sound is added (῾) or not (᾽). These marks not only affect pronunciation but also sometimes signal the difference between words. For example, ἑν has the rough breathing so it is pronounced “hen” and it means one, while ἐν has a smooth breathing so it is pronounced “en,” and means in. These breathing marks should always be included when writing Greek.

Sometimes an iota is placed under an α, η, or ω, thus, ᾳ, ῃ, ῳ. This iota subscript does not change the pronunciation and it is not included in transliteration. It is, however, an important part of the word, often signaling the way the word is functioning in a sentence.

Three accent marks are used: the acute (´), grave (`), and circumflex (~). In earlier Greek they denoted changes between lower and higher pitch; rising, falling, rising then falling, respectively. By the second century BC, however, they were increasingly used simply to mark the syllable to be stressed. At that time they began to be written occasionally and by the ninth century AD they appeared on each word.

Words often change their accent when there is a change in a word’s form. Such changes in accent are not usually significant for understanding a word, but occasionally they are. For example, ὁ is a definite article, the, but ὅ is a relative pronoun, which. See appendix 1 for the basic rules of accenting and appendix 2 for a list of the main places where the accent makes a difference.

Words in Greek have one vowel or diphthong per syllable. Thus Ἰερουσαλήμ (Jerusalem) = Ἰ – ε – ρου – σα – λήμ. Notice that vowels which are not part of a diphthong may be a syllable by themselves, and that a single consonant goes with the vowel or diphthong following it. As a rough rule, when two or more consonants are together they stay together if they can be pronounced together easily: ἐπιστρέψας = ἐ – πι – στρέ – ψας; otherwise they are separated.

This guideline can affect pronunciation at times. For example, πίστις (faith) is divided πί – στις and thus pronounced pī – stĭs with a long iota in the first syllable since it is not closed by a consonant (§1.2d). Doubled consonants are split: θάλασσα = θά – λασ – σα, ἄρρωστοι = ἄρ – ρω – στοι, but this division need not affect pronunciation.

The components of words also guide your pronunciation. For example, ἐπι- στρέψας is a compound verb composed of a verb with the preposition ἐπί added to the front. So when you pronounce the word you will naturally pronounce the preposition as a unit, as the diaeresis (§1.12) in προϋπῆρχεν illustrates.

Greek uses a period (.) and comma (,) as in English. A Greek question mark looks like an English semicolon (;). A raised dot in Greek (·) is not found in English. It represents a stronger break than a comma, but less than a period. It signals a division in a long sentence. English translations often start a new sentence where there is a raised dot in the Greek. Periods, raised dots, and question marks always signal the completion of a clause; commas do so sometimes, but not always.

Some words, such as ὁ mentioned in §1.6, do not have an accent because they are pronounced in conjunction with the word either before or after. Sharing an accent does not change the meaning of a word.

When a word ending in a short final vowel is followed by a word beginning with a vowel, the short final vowel often is elided, that is, it drops out. Its place is marked by an apostrophe. Elision is especially common in conjunctions and prepositions. For example, ἀλλὰ ὕπαγε becomes ἀλλ᾽ ὕπαγε and ἀπὸ αὐτῶν becomes ἀπ᾽ αὐτῶν. For further details see §4.37 and §5.255b.

Sometimes two words are combined, with the final vowel on the first word melding with the vowel at the front of the second word. The resulting vowel has a mark called a coronis over it, which looks like a smooth breathing mark. For example, καί and ἐγώ become κἀγώ; καί and ἄν become κἄν. Lexicons cite the combined form.

Two dots over a letter, like a German umlaut, is called a diaeresis (διαίρεσις, division). It is put over the second vowel in a diphthong when the diphthong is pronounced as two separate vowels. So πραΰς is pronounced πρα – ΰς.

Resources vary in their descriptions of some of these sounds. A more detailed description of a reconstructed pronunciation is available on the website for the Biblical Language Center, along with sample recordings. For help with modern pronunciation the web has many resources, and language learning sites such as Duolingo and Mango Languages are very helpful. There are several websites containing the entire Greek New Testament read aloud, many of them using modern pronunciation. Just search “greek audio new testament.” There are also free apps for phones. 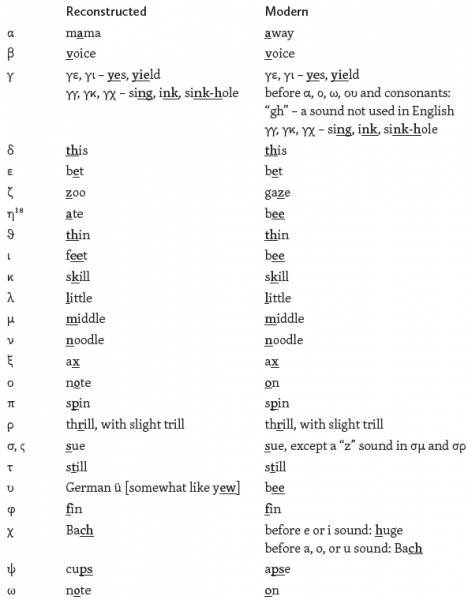 A Grammar of New Testament Greek is available for pre-order at Eerdmans.com, Barnes & Noble, ChristianBook.com, and Amazon.com.

Look Inside! A Grammar of New Testament Greek