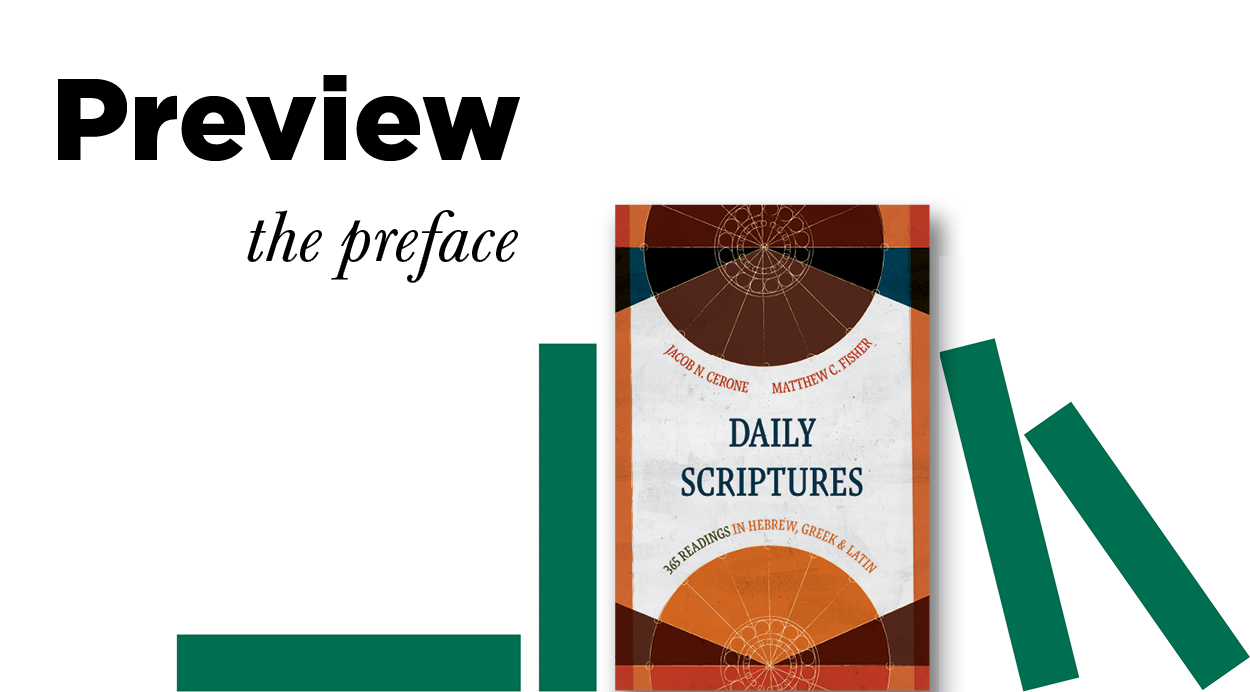 Look Inside! Daily Scriptures: 365 Readings in Hebrew, Greek, and Latin 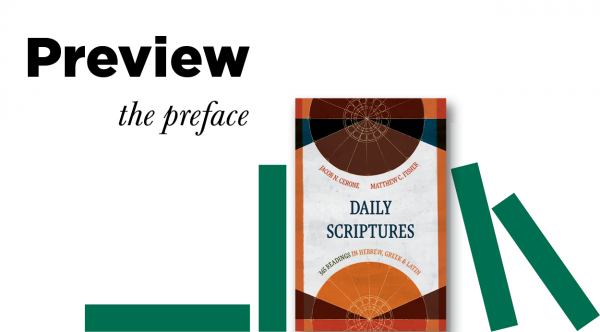 Daily Scriptures: 365 Readings in Hebrew, Greek, and Latin is available for pre-order at Eerdmans.com, Barnes & Noble, ChristianBook.com, and Amazon.com.

A common thread woven throughout my studies has been the biblical languages. When I was a senior in high school, I started learning the Greek alphabet and some basic vocabulary. I was hooked. This was not because I had a natural talent for languages. I did not. What little I know I have fought for through persistent study, numerous courses, and a commitment to share what I have learned with others. I was hooked because I was convinced that it was necessary to study the biblical texts in their original languages because it would be the foundation for all further biblical studies and provide a deeper appreciation for the beauty and complexity of the original texts. During the first semester of Greek in my pastoral studies program, I was required to purchase a copy of the Nestle-Aland Novum Testamentum. Weeks later, I purchased the Rahlfs-Hanhart edition of the Septuagint along with the Latin Vulgata and the Biblia Hebraica Stuttgartensia. Never mind that, at the time, I could barely read the word λόγος, had never taken a lesson in Latin, and could not recognize the strange symbols in the BHS. I simply knew that I needed to be able to read these texts and these languages.

As the years passed, Greek professors, like Michael Vanlaningham, Herbert Bateman, Scott Kellum, and especially David Alan Black, Hebrew professors, like Tim Sigler, Tracy McKenzie, and Heath Thomas, and Latin instructors, like Fred Williams and David Alan Black, cultivated my love of the languages and my love of both the Old and New Testaments. In fact, at the conclusion of my MDiv program, I could not decide whether I wanted to continue in Old Testament or New Testament studies. Instead of deciding, I enrolled in the New Testament department as a ThM student, performing a comparative discourse analysis between the Masoretic and Septuagint texts of Jonah. My ThM coursework consisted of New Testament and Old Testament courses, which helped keep the relationship between the two Testaments constantly in mind, and my professors graciously permitted me the leeway to translate Greek, Latin, or Hebrew texts related to our studies in lieu of final papers. Professors like Black, McKenzie, and Thomas constantly reiterated the slogan: If you aren’t using the languages, you’re losing them.

However, learning and maintaining a language is no easy task. It requires discipline, convenient (even portable) access to texts, lexica, and a reading plan to keep you interested, engaged, and focused instead of floating aimlessly from book to book, passage to passage. The aim of this volume is to provide precisely these aids. We have carefully selected Hebrew, Greek, and Latin texts and arranged them within a salvation-historical framework, walking you through the biblical story from creation to God’s culminating rule over all he has made. Contextual glosses are provided for infrequent vocabulary, and in some cases, translation or context aids are given in the footnotes to help orient you to better understand the material. The goal for this book is to provide a convenient, self-contained volume that helps readers keep up with their languages on a daily basis and simultaneously feed themselves spiritually on the whole counsel of God.

The conception for this book can only be described as providential. While conducting research for my doctoral dissertation in the theological library of the Friedrich Alexander University in Erlangen-Nuremberg, I stumbled upon a box of books that was being given away. Therein I found a volume of Die Losungen 2011: Ursprachen. Each year, the Evangelischen Brüder-Unität publishes a collection of Old Testament and New Testament readings for each day of the year. Although most editions available within the evangelische Kirche are printed in German, this edition was printed in the original languages. On the front cover, in Hebrew, were the words (“in the beginning God created”), and below them in Greek were the words Ἐν ἀρχῇ ἦν ὁ λόγος (“in the beginning was the Word”). At the time, I was unfamiliar with Die Losungen, and I excitedly flipped through the volume to see whether the pairings had been selected based upon the New Testament author’s usage of Old Testament texts. I was disappointed to find that this was not the case. This disappointment, however, inspired me to create the volume I had hoped already existed: an original languages devotional reader that contains short, manageable readings from the Old Testament and New Testament, which have been selected and paired together because New Testament authors had in some way received, relied upon, alluded to, cited, or shared thematic material with the Old Testament passage with which it has been paired.

I am thankful to a number of people who have helped along the way. First, I am especially grateful for those professors who taught me Greek, Hebrew, and Latin. This volume is, in the end, a fruit of their labors, of their commitment to their students, and their love for their craft. In the early stages of this book’s conception, it was nonnegotiable to include the Hebrew Old Testament, Greek Old Testament, and Greek New Testament. Initially, I resisted the idea of including Latin, but in the end, I am thankful for the prodding from Tavis Bohlinger, Rick Brannan, and Natan de Carvalho. Without their insistence, this volume would not have taken its current form. I am also thankful to my wife, Mary Beth, who listened to me talk about this volume for countless hours and helped me think of numerous pairings to help fill out certain categories that were lacking, especially in the Advent section. Additionally, I would like to thank the following people for the encouragement they offered along the way: Todd Scacewater, Michael McEwen, and especially Nathaniel Cooley, who offered helpful suggestions that have only improved the overall quality of the reader. I am also grateful to my father, Joseph Cerone, for his help proofreading the preface and introduction to this book. The team at Eerdmans also deserves mention. It has been a pleasure working with them, especially Trevor Thompson, Laurel Draper, and Justin Howell. Finally, I am eternally grateful to my coauthor Matt Fisher. Matt and I steadily combed through both Testaments, looking for and documenting parallels. He helped refine the system for categorizing and arranging the passages, and he ensured nothing remained in the book that should not be there. He adjusted without complaint as the project morphed several times throughout the process and stepped up when I decided, after much waffling and hesitation, to aim for a more ambitious deadline than previously planned. It has been nothing but a pleasure to work with him on this, in every way, collaborative project.

I still remember many years ago how my curiosity about Scripture’s interpretation of Scripture was particularly piqued one day while reading F. F. Bruce’s little book on the development of Old Testament themes in the New Testament. Bruce briefly reminded this reader that the New Testament authors occasionally equate Jesus with YHWH in the Old Testament. Pausing on Jude 5, he explained how, on the most likely reading, Jude understood Jesus Christ to be “the Lord” in the Exodus-wandering narratives. I was hooked.

Since that time, especially in my lectures on biblical theology at Saint Petersburg Christian University (Russia), I have explored ways various New Testament authors use Old Testament texts, and also the broader question of the relationship between the Testaments, and my interest in the subject has only grown.

Therefore, when, about a year ago, my friend Jacob invited me to participate in a book he was pitching to Eerdmans, seeking to pair relevant Old Testament passages with corresponding ones in the New Testament, I was pretty quickly onboard. A few months later, in the spring of 2020, when the COVID-19 crisis began spreading across the planet, I found that I had some extra time on my hands to search out several hundred pairings.

The very process of selecting the pairings is edifying, for it not only causes the researcher to identify what kind (or kinds) of connection there may be between the two passages (e.g., linguistic, thematic, typological) but also forces him to ponder surrounding texts and the often layers of subtle interpretational strategies used by the New Testament author. I am in awe of how our great God and Savior has so arranged and intertwined the texts of the canon to form an ever-deepening and seemingly never-ending well of intrabiblical connections.

Years ago, when Jacob and I lived in the same American town and went to the same American church, I’m sure we never thought that one day we’d be collaborating on a book while living out our lives with our families in Germany and Russia. I am, therefore, very grateful for how God has providentially arranged our comings and goings, and grateful to Jacob for inviting me into this project of his.

Daily Scriptures: 365 Readings in Hebrew, Greek, and Latin? is available for pre-order at Eerdmans.com, Barnes & Noble, ChristianBook.com, and Amazon.com.

Look Inside! Daily Scriptures: 365 Readings in Hebrew, Greek, and Latin