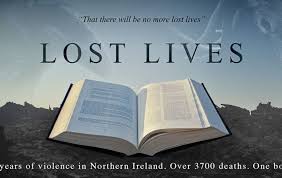 The film Lost Lives, based on the book of the same name by David McKittrick et al that dispassionately catalogued 3,700 lives lost in the Northern Ireland Troubles, is a dissonant, disconcerting, disturbing, piece of beauty.

I struggle to type the word beauty. It seems out of place. It seems almost disparaging of the lives that are being spoken of, whether those are lives brutally cut way too short by horrible murder or the lives of those who have lived all the years since with the heartache and grief.

Yet, Lost Lives is a carefully and beautifully put together piece of film. The film makers Dermot Lavery and Michael Hewitt have spoken of not making a documentary but a film inspired by the book. This is what the book evoked in the heart of two artists.

What they therefore create is this blend and blur of wonder and danger, calm and confusion, beauty and violence. There are images of sea and mountain of wild deer and dead suburban rats, sacred churches and desolate buildings.

This is all a discordant and frenetic background into which they then edit in news clips of bombs and funerals and overlay the stories of 20 of the 3,700 entries in the book. They add no script. Only what is in the book.

On this fascinatingly disturbing canvas Dermpt Lavery and Michael Hewitt use the gravitas of the voices of an array of Ireland’s best actors including Liam Neeson, Kenneth Brannagh, Roma Downey and Bronagh Waugh to tell the stories of lives dismissed, destroyed and discarded by a bloody hatred that is almost impossible to fathom. The final piece of the magnificence is a requiem like soundtrack by the Ulster Orchestra.

Lost Lives is a work of original imagination but it the film is not about the art. It is about the lives lost. When it comes to these live lost this is a arduous tale of horrible inhumanity. There is absolutely no beauty in the content.

The stories are a hard listen. The one year old shot by the bullet that went through her seven years old sister’s skirt; the family including two children under 18 months who were blown up in the Dublin bombs; the two Protestant brothers killed for dating Catholic girls yet we don’t which side did the deed; a few teenagers lives over before they began. Then there is the grief and heartache of this left behind. There are the suicides too.

“War is hell” is how Michael Hewitt described it. More poignant were the words of Mrs Orr’s, mother of those sons murdered for dating the wrong girls, “It’s like sitting and watching a nation committing suicide and there’s nothing you can do about it.”

Most philosophical of all were the words of James Kennedy’s father. James was 15 when he was killed in the Graham’s Bookies’ massacre in 1992. James’ mother died of a broken heart just two years later. James’s dad said, “The bullets didn’t just travel in distance. They travel in time. Some of those bullets will never stop travelling.”

Indeed… and we as a nation need to see this film, hear these stories and view that this inhumane monster of cold blooded carnage never raises its head ever again.