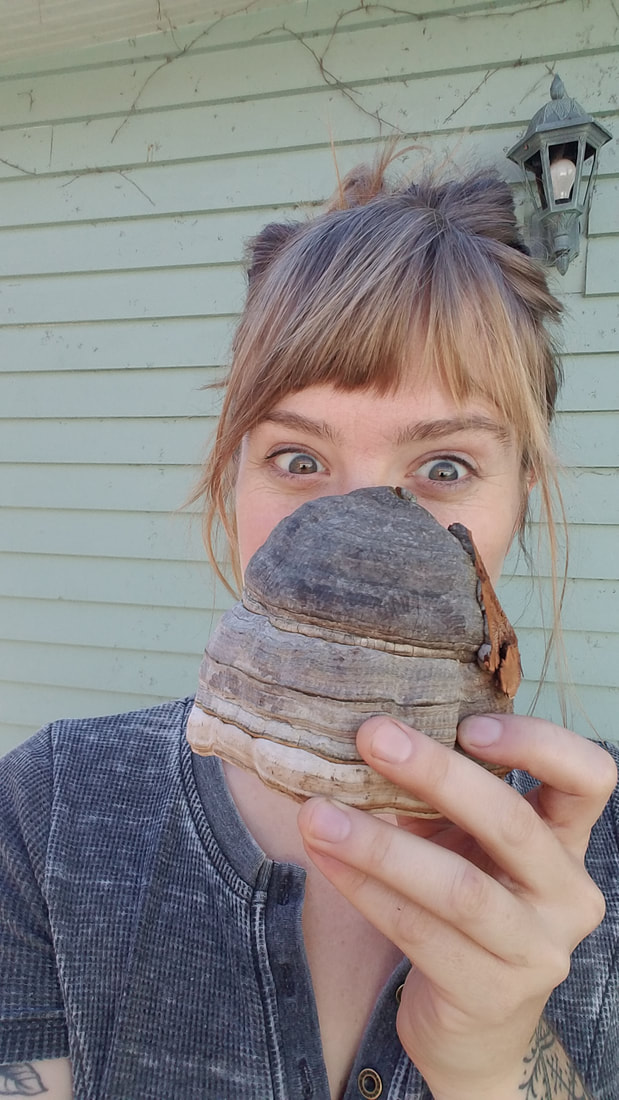 Tinder Fungus and the Not So Subtle Art of Double Extraction

Mushrooms have long been lauded as powerhouses of mystical healing properties. Today with writers and researchers like Paul Stametes and William Padilla-Brown and many more looking into the constituents and seemingly endless healing properties of fungi and lichens. Far from a new concept, the uses of mushrooms and lichens as medicines goes back to some of the earliest medicinal practices.

Recently I met a mushrooms called Tinder Fungus, or Fomes fomentarius, and I am basically in love with it now. When I found this hard, shiny strange gray stripped polypore fungus on a hike near our home recently with my partner, I did not know the ID right away, but something in me said, grab one of these to ID, this is important. Upon our return home it took no time at all to learn its name. As we researched more about it, I was so excited to discover that it was one the fungi found on the ice mummy researchers have named Otzi the iceman. This gave the Tinder fungus its other common name, Ice Man fungus. It is also called hoof fungus and tinder conk for reasons we’ll see why.

Me being normal with Tinder Fungus
It is found in Europe, Asia, Africa and North America, this is a long lived mushroom. The fruit bodies are perennial, surviving for up to thirty years! The strongest growth period is between early summer and autumn. If you look at the mushroom sliced sideways, you can see how it grows in layers each year. It was used by our ancient ancestors to carry fire, giving it the name tinder fungus, and also to make a substance known as Amadou. The young fruit bodies are soaked in water before being cut into strips, and are then beaten and stretched which separates the fibers. The resulting material is referred to as "red amadou”, and I believe Paul Stametes wears a hat made of it! It was used in early medicine and dentistry due to its absorbent nature.

Historically the tea of this mushroom was also a powerful medicine, which may explain why Otzi had it on him. He was found in the ice in the mountains between Austria and Italy, and lived between 3400 and 3100 BCE. I felt a strange feeling as I handled the fungus after that. Recently, my brother did an ancestry test and sent me the results, and interestingly enough, we were part of Otzi’s haplogroup. While that doesn’t mean we are direct ancestors of this famous mummy, it made me feel strangely connected, sitting there holding this fungus we found on a Beech tree here in North Carolina, knowing it was a tool, both for fire making and medicine, my Copper age ancestors may have cherished. He had it laced through a piece of leather, like a mushroom necklace or charm, which I love the idea of. It was most likely to ensure it was easier to carry, but it is beautiful.

Tinder Fungus has been used as a tea for centuries in a wide variety of cultures. Though recorded as Agaricum in 200 AD, the fungus that was used to combat deadly diseases such as Tuberculosis in the Middle Ages is thought to be Fomes fomentarius or another close species, Fomitopsis Officina. Hippocrates in the fifth century BC described Fomes fomentarius as a ‘cauterization substance for wounds’. It would go on to be used in this way as amadou for centuries. This may be what gave rise to it’s other name: ‘surgeon’s agaric’.
In European folk medicine, Fomes fomentarius was used to cure haemorrhoids, bladder disorders, and dysmenorrhea. I sliced the fresh fungus with a very sharp knife (it is hard to cut) and decocted (boiled it gently) for 30 minutes. It made a reddish, almost birch-beer like tea that I am now obsessed with. I drank a lot of it. I love it.

The International Journal of Medicinal Mushrooms has a lot of good things to say about the medicinal powers of the fomes. In their report "Anti-Infective Properties of the Melanin-Glucan Complex Obtained from Medicinal Tinder B. Mushroom, Fomes fomentarius (Aphyllophoromycetideae)", they say that Fomes fomentarius raises the immunity of the body, enhancing blood circulation, regulating blood sugar and lowering blood pressure. It also has shown its ability to fight the herpes virus, influenza and much more. From Trad Cotter: "These mushrooms are wonderfully rich in compounds similar to those of turkey tail (Trametes versicolor), including polysaccharide-K, a protein-bound polysaccharide commonly used in Chinese medicine for treating cancer patients during chemotherapy." ​I've added it to my turkey tail and reishi extractions for extra oomph. 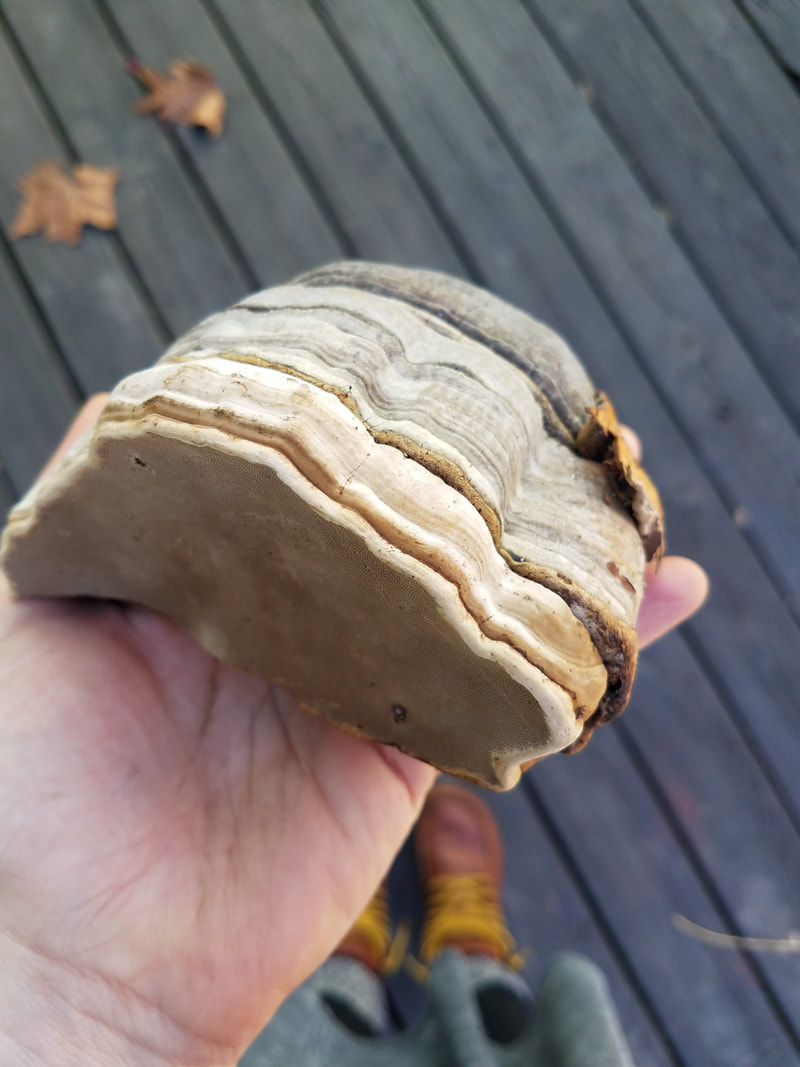 Fomes fomentarius is incorporated in the ancient Indian medicine as a diuretic. It is also used as a laxative to stimulate bowel movement. The fungus is also a remedy that steadies nerves. The Chinese used Fomes fomentarius in the treatment of cancer of the throat, the stomach and the uterus. The Okanagan-Colville peoples used the fungus to make antimicrobial teas and poultices to treat infections and arthritis. It was used to cauterize wounds by Laplanders and the Cree to treat frostbite. Excitingly, the mushrooms are also not just medicinal to humans, Paul Stametes found extract of the mushroom are great for bees, namely in reducing the number of deformed wing virus and Lake Sinai virus.

Magically, it was used in smoking rituals in western Sibera and in Hokkaido it was believed burning the fruiting bodies overnight would banish evil spirits. The Khanty people, an indigenous population in what is known now as Russia, also used it ritual in a similar fashion but specifically was a funerary fungus. The smoke was produced through burning the fungus when a person died and it was continued until the deceased person had been taken out of the house. The people coming from the funeral also had to pass through smoke. The aim of the procedure was not to let the dead have any influence on the living​. I do so love it when a plant or mushroom is good for immunity or disease and it also has a corresponding metaphysical purpose as a clearer of evil or spirits. As above. So below.

As in all things, over-harvest can be a problem. These are long lived, slow growing mushrooms. Please NEVER harvest lots of or make medicine with a mushroom you are unsure of ID for. Taking just a few and making a double extraction of the medicine is a much better way to make use of rarer fungi, as using the tea or powders only, despite being traditional, does use more matter. This great blog post goes into some detail and lists further resources on growing these amazing beings.

Wait, wait. What is a double extraction? All this great info about mushrooms made me realize, I’d like to give you the quick and dirty on making medicinal mushroom double extractions. You can do it with your new friend the tinder fungus, or turkey tails, reishi, chaga, shitake, lion’s mane, Usnea lichen and so many more. Obviously there are 100 ways to do things in herbalism and medicine making, so I will give the very basic outline and theory behind it, and tell you what I do. There are many much more knowledgeable medicine makers older and wise then I. 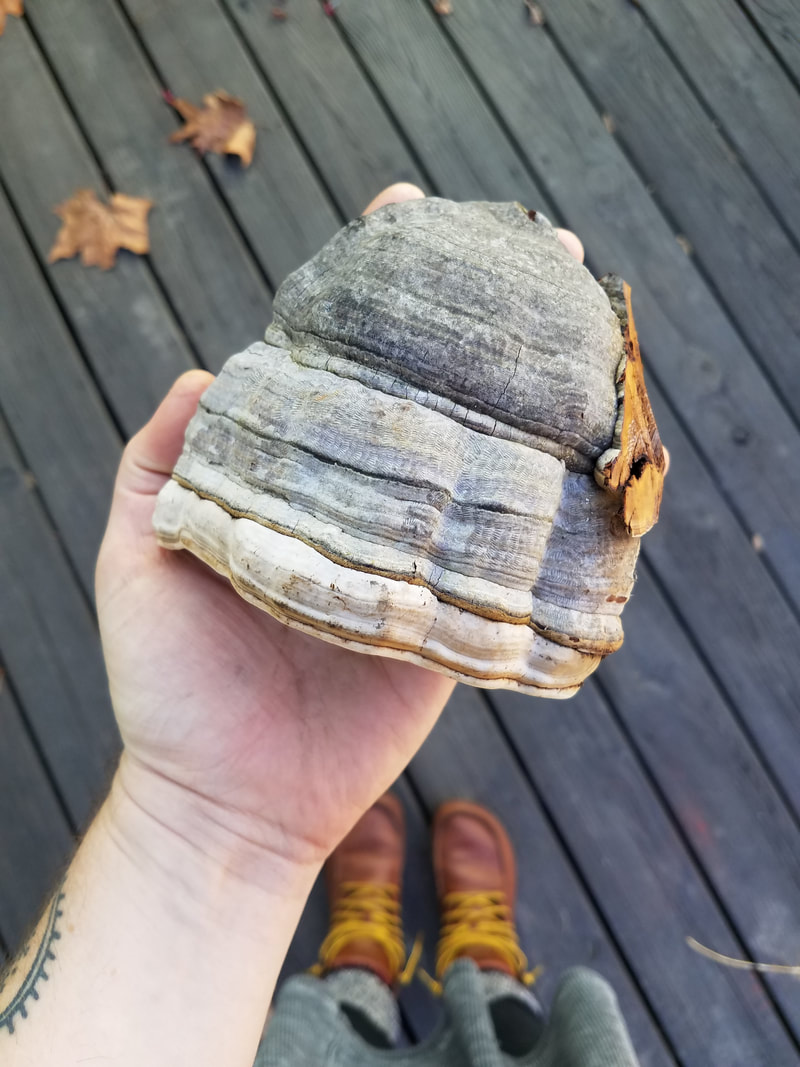 Mushrooms contain a lot of different types of constituents. Some are easily water-soluble (polysaccharides) and some are less soluble (terpenoids and phenolics). By doing the double-extraction process, it allows you to utilize the full spectrum of constituents in one medicine.

The simple steps are:

If you want to forgo measuring and make a folk tincture (i.e. one that is eye-balled and not necessarily exact but still kickass), just make sure to tincture the mushrooms or lichen in 80 proof or higher alcohol and ad one part water extract to one part tincture. That should leave you at roughly 25-35% alcohol and be shelf stable.

Pro tip: If tincturing feels confusing, (I’m terrible at math and it made me feel mad at first), check out 7song’s very helpful PDF on tincturing to make it clearer.

Now go be free, drink mushrooms, feel like a Copper Age human and wear Tinder fungus as jewelry! Well, you don’t have to do any of that, but I hope this toe into the world of mushroom medicine has at least tickled your fancy. If you want to get wild and actually DO this with me and Abby Artemisia, check out our Folk Herbalism and Wild Food Foraging school, The Sassafras School of Appalachian Plantcraft. We have two more days to get the Early bird discount! Blessings in the New Year (even though the seasons are a wheel and have no beginning or end)!
+Works Cited+

Tinder Fungus and the Not So Subtle Art of Double Extraction