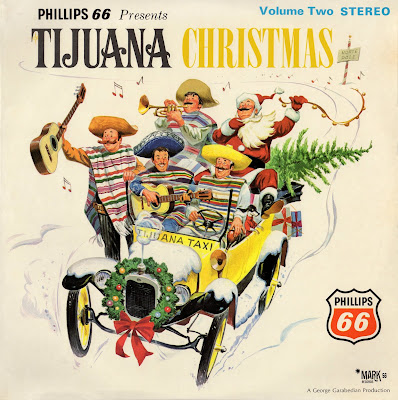 If you were paying close attention, you noticed the record I just shared with you a couple of hours ago, and you may recall that there was a second volume. Well, here's that second volume for you, and it comes with a little bit of a story. If you listen to the album, you'll see that side one is not all that Christmassy, like maybe they took old recordings and retitled them to fit in with the season.  Maybe they added some jingle bells here or there, but not much. At least side one sounds a bit like Tijuana music is meant to.  When you get to side two, you'll immediately notice that something is wrong.  It's Christmas music, but it's got no Tijuana flavor at all.  It's just an orchestra with singers.  The fine print on the back of the jacket even admits as much, but I'm sure very few buyers noticed that before they brought home the record.  Some digging and comparing reveals that side two is in fact tracks by Wally Stott, His Orchestra And Chorus from their 1959 Warner Bros. Christmas album Happy Holiday-Christmas In Stereo! I guess the power of licensing is strong with this one. Or maybe they just stole it and hoped no one would notice. I've had this share in the queue for a while, but I was reminded of it last night when Lee over at Music You Won't threw up a share from the same label that seems to have employed the same trick, only with the whole album. His record appears to be a track from Walter Brennan, and then the rest of the LP is Dorothy Collins from her rare Christmas record on Everest. You just never know what you're going to find when you're dealing with budget vinyl.  This is The George Garabedian Players-Tijuana Christmas Volume 2 (Mark 56 556, Stereo, 1968). 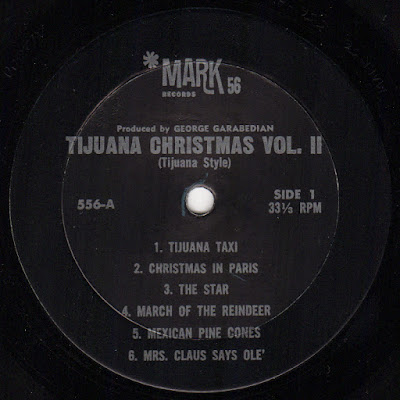