M’sian Gets Her Car Kicked by Annoyed Rider Who She Honked at, Sparks Debate Among Road Users

As we all know, Malaysian traffic jams as well the driving of other road users can often be frustrating and lead to fights. It seems that when we are on the road, tensions are high which could easily spark fights.

A Malaysian recently shared on Twitter about an incident she had with another road user.

In a Twitter post, the road user shared an image of a motorcyclist along with the caption, “I don’t know whose father this is but I’m gonna shame him anyway.”

“He stopped in front of my car and kicked my front bumper because he had to wait for me to change lanes.”

In following posts, the user explained that there was heavy traffic at the time and that she wanted to get on the right lane so that she could catch the contraflow lane entrance. 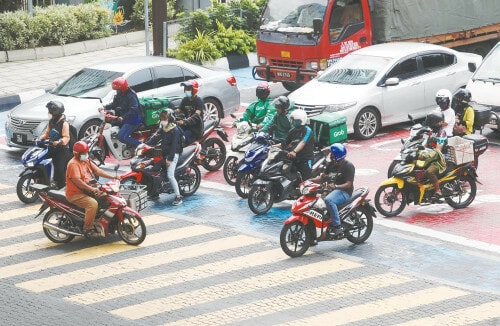 For illustration purpose only

“I did my due diligence of waiting for the stream of motorcycles to pass and gave a signal. This guy speeded up from far behind and started honking at me. Of course I honked back,” she added.

She stated that the motorist then stopped in front of her car, blocked her and kicked her bumper whilst making eye contact.

“Good thing social media taught me well so I whipped out my phone to take his photo. He only started running away when he realised that I was going to take his picture.”

The post has garnered quite a bit of attention and road users expressed their thoughts in the comments section.

Car drivers expressed some of the bad experiences they have had with motorcyclists.

One user recalled their experience of being blocked by a bunch of bikes whilst changing lanes. “As usual they honked me because they own the road. Then I showed them middle finger then a biker smacked my side mirror.”

“I always experience this. The road is clear. I’ve given signal. Started to change lanes then a motor from 200 metres behind started honking loudly,” said a user. 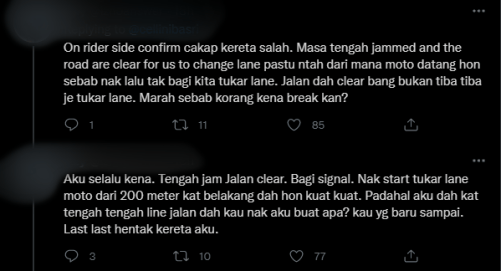 “I don’t know what is it about motorcyclist that have seen that someone wants to shift lanes and only then will they speed up. Even after you’ve given signal and it’s safe to change lanes, there’s still a*sholes like this,” commented another user.

Motorcyclists tell car drivers to see things from their perspective

On the other hand, motorcyclists urged those who drove cars to try to look at it in their perspective. One commented, “Sometimes motorcyclists honk because they wanna tell car drivers that they’re there.”

“Just one thing I want to say, when I used to ride motorcycles, only then did I realise what riders face everyday,” said a user.

“Have you ever ridden a motorcycle? If you do, then only will you know. If you want to switch lanes, you must wait for riders to pass first,” commented another user.

Who is in the wrong? Let us know in the comments. 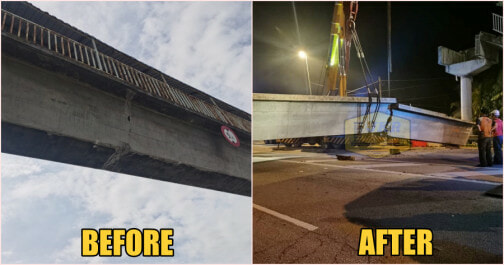 M’sian Gets Her Car Kicked by Annoyed Rider Who She Honked at, Sparks Debate Among Road Users