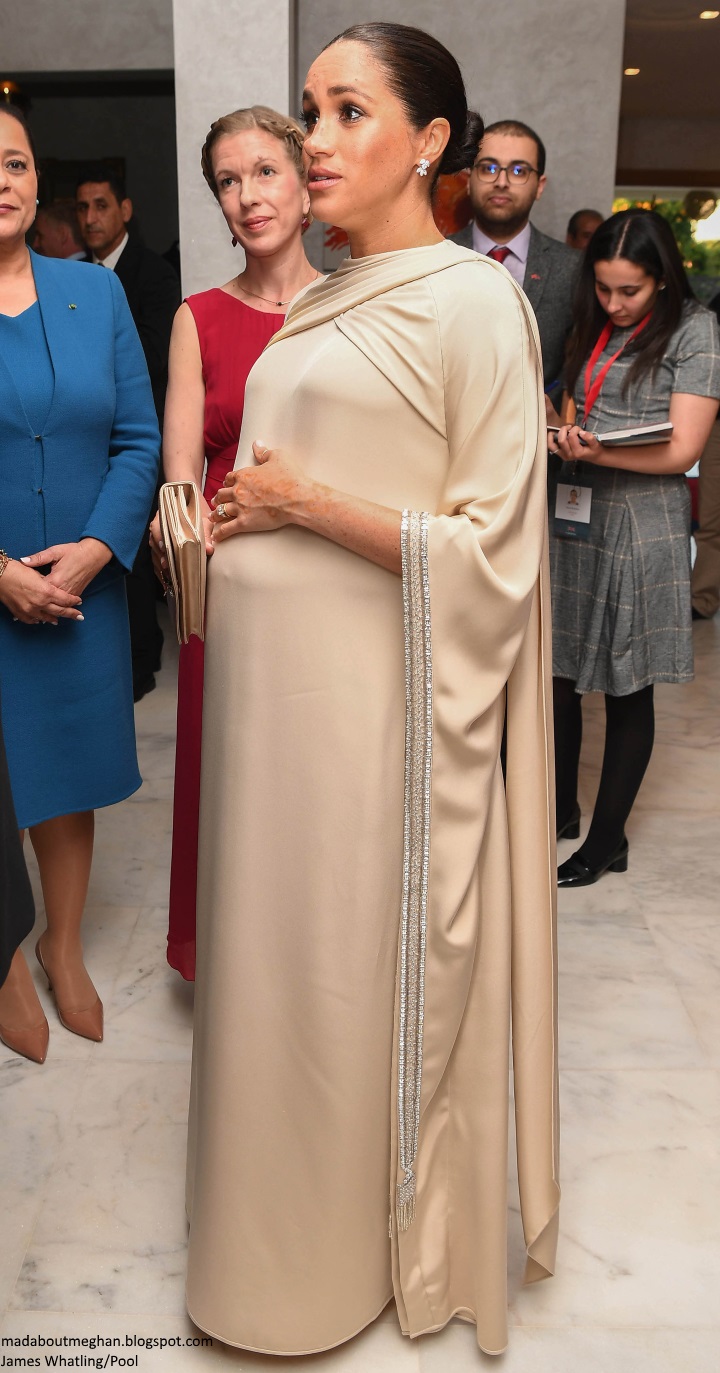 The Duke and Duchess of Sussex concluded day two of their official visit to Morocco with an evening reception at the British Ambassador's residence in Rabat. 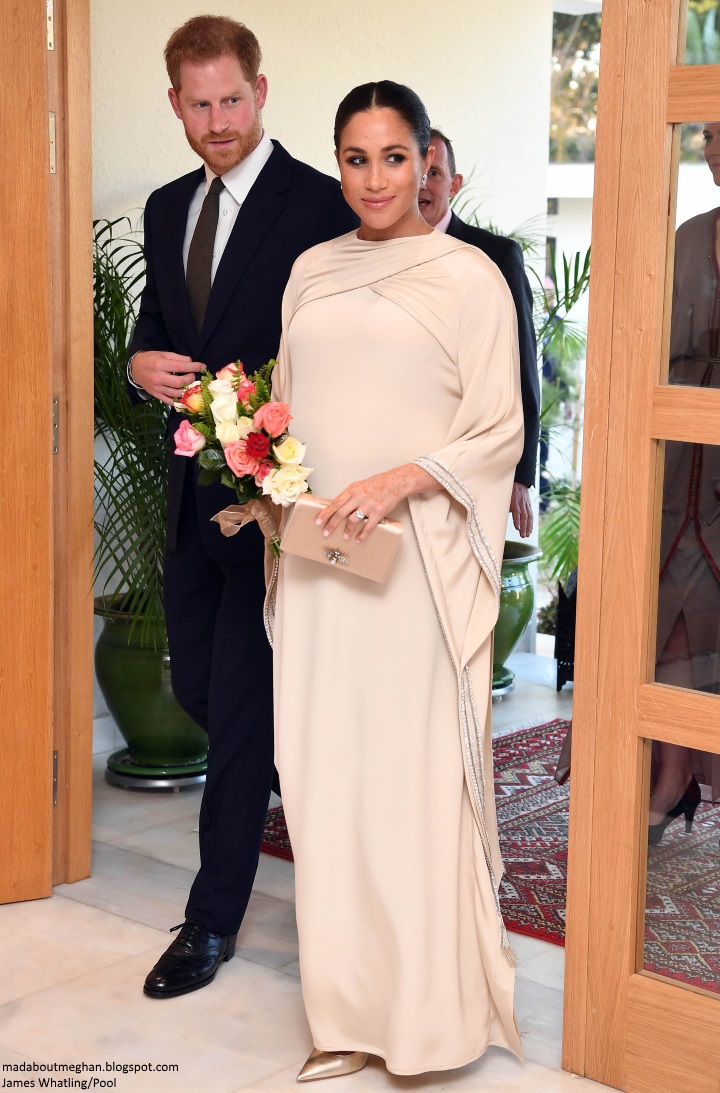 The Duke and Duchess arriving.

Embed from Getty Images
They were presented with gorgeous flowers from Ambassador Reilly's daughters Orla and Elsa. Meghan thanked the girl and said "Thank you, that's so kind. They're beautiful". 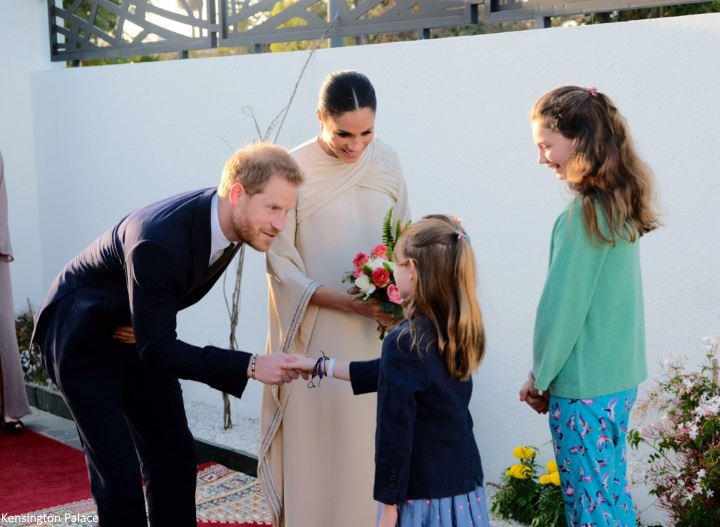 More from the Mail Online:

'The Duchess introduced her husband, turning to him saying: 'This is Harry,' as the Duke bent down to shake the sisters' hands. After asking Elsa her name Meghan was handed a second bouquet, which she smelt exclaiming 'Wow, they are so sweet.'

Afterwards Orla said: 'We were quite nervous meeting them but they were really nice. Prince Harry asked us if we lived here all the time or whether this was a temporary house and asked us if we had parties like this every week, which we don't otherwise it would be a lot of work! It's been a lot of preparation but really fun.

'The flowers we gave them were from our garden which we helped choose and Meghan said they were beautiful which we are so glad about.' Elsa said: 'It's been very busy but at the end it all turned out well and it was very good.'

Day two saw the couple travel to Asni in the Atlas Mountains to meet staff and students at leading girls' education organisation Education For All and a local secondary school  to hear more about efforts in the area to improve access to education. 70% of women in Morocco are illiterate with the figure rising to 83% in the most rural areas. Meghan told students she's "proud" of their work and asked them about their aspirations for the future. Harry also presented founded Michael McHugo with his MBE. 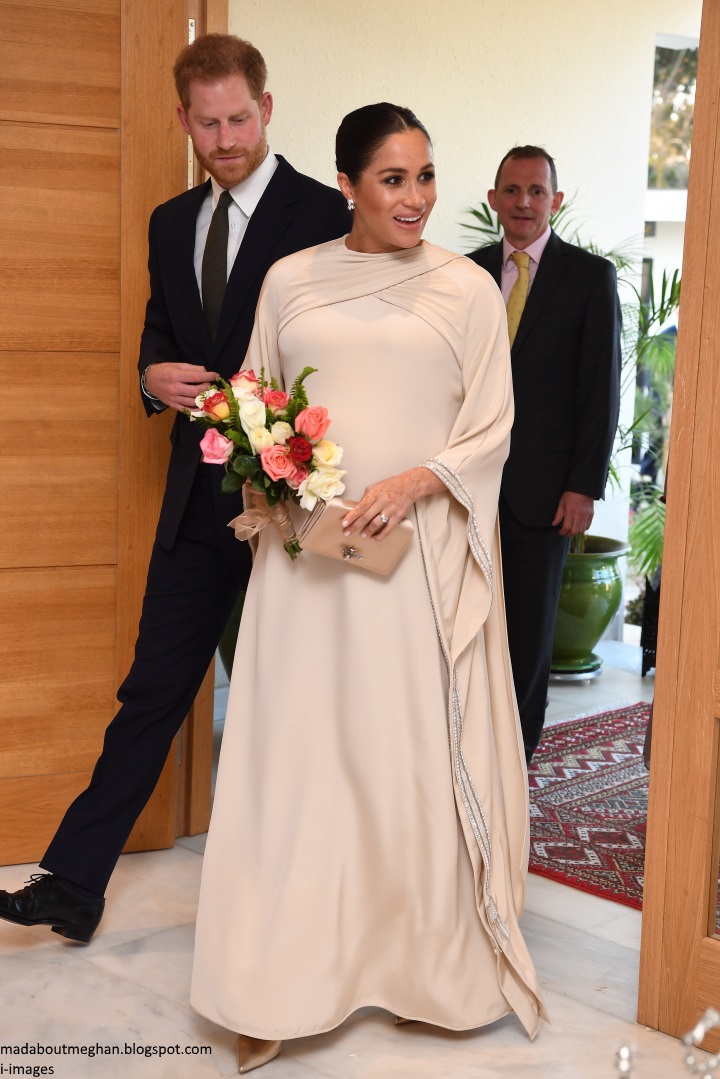 Inside, Harry and Meghan washed their hands in scented rose water, it's a time-honoured tradition in Morocco. 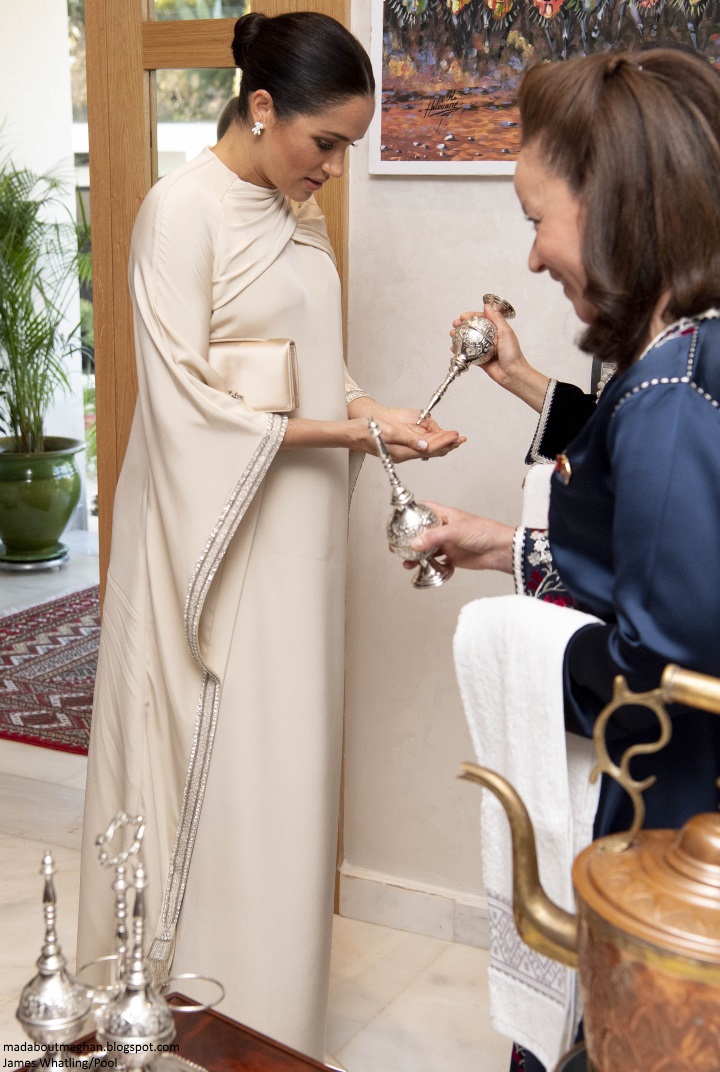 An arrival video from Emily Andrews.

Video: at the ambassador’s reception this evening in Rabat, Meghan (in Dior, we were told!) and Harry were welcomed in traditional rose-water ceremony. pic.twitter.com/TTTenzKnCr
— Emily Andrews (@byEmilyAndrews) February 24, 2019

The reception continued the focus on highlighting women and young people making a difference in the country. They met 130 influential Moroccan woman, young entrepreneurs, athletes and military officers. 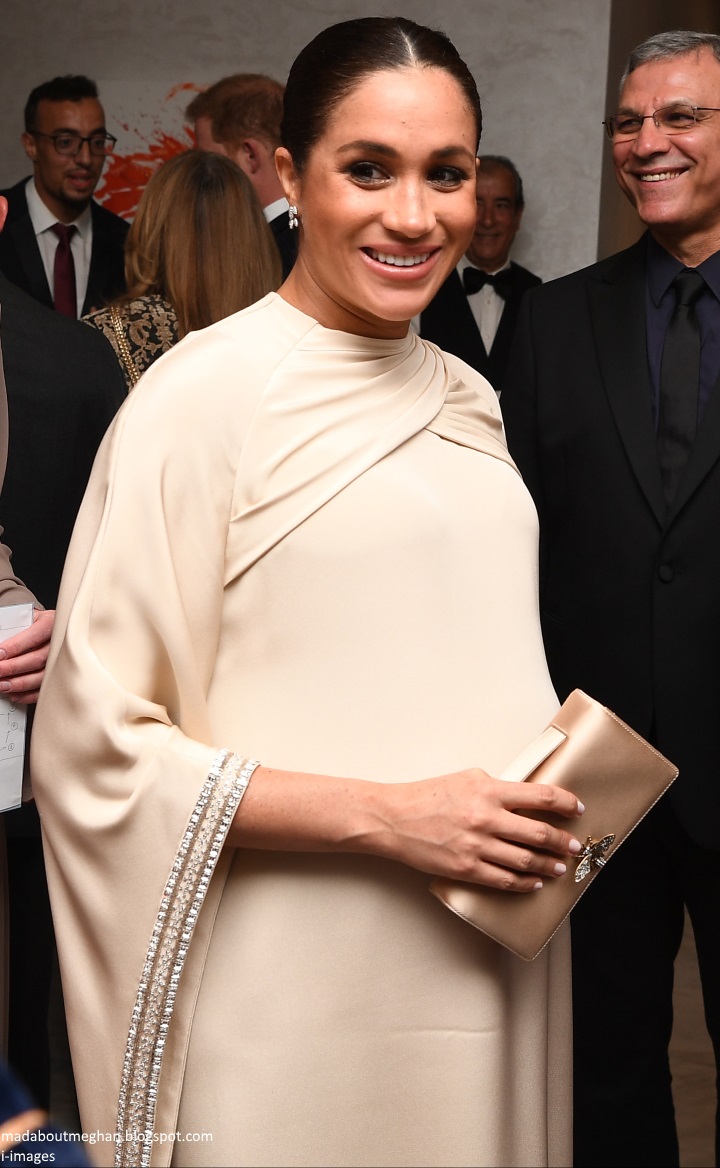 During a conversation with a group of female executives, Meghan discussed the importance of women globally doing more to improve opportunities. "Women have to challenge everywhere in the world".

'The Duchess, who has made women’s empowerment a key part of her work, was responding to Meriem Bensalah, chief executive of a finance and agricultural firm called the Holmarcom Group, who told her that Moroccan women had made great advances towards equality but still faced disadvantages.

'We were discussing how there are still many boundaries all over the world,' the business executive said.

The couple appeared in good spirits as they spent time speaking to some 130 influential Moroccans at the reception, including captains of industry, military officers, disabled athletes and young entrepreneurs.' 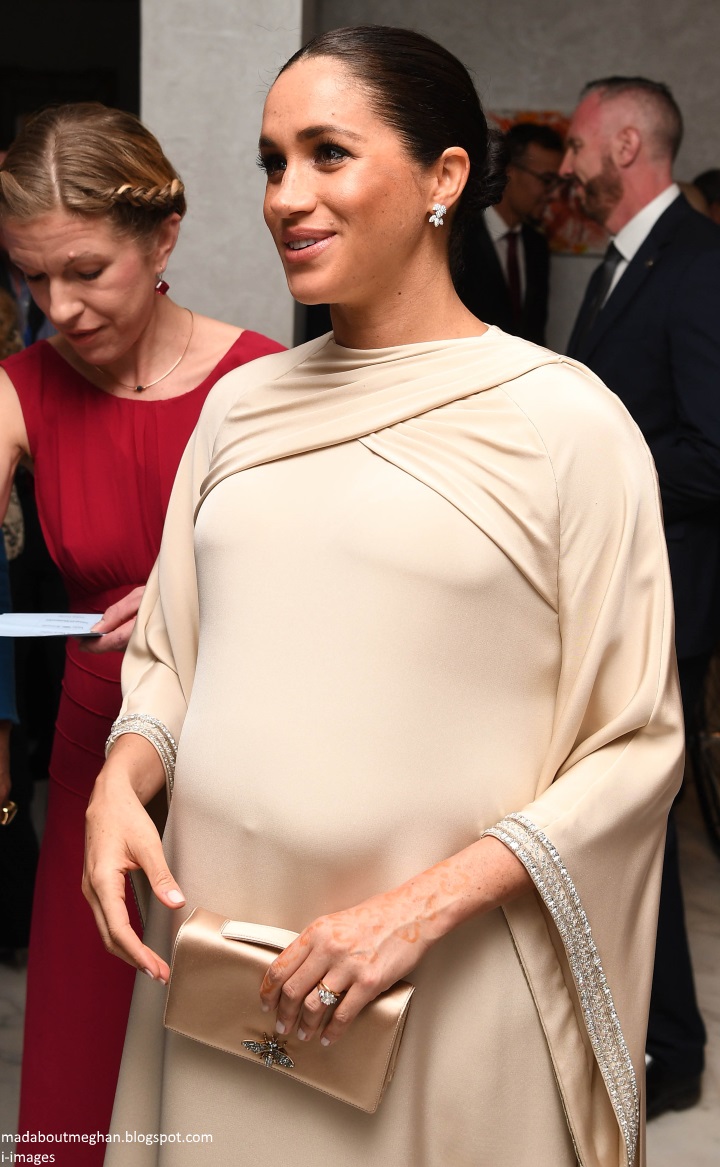 Harry chatted with members of The Moroccan Royal Gendarmerie who attended the Royal Military Academy in Sandhurst. During a 44-week training course in Camberley, Surrey, Prince Harry was known as Officer Cadet Wales. The course was intensive and involved both theory and tough physical training. Prince Harry was commissioned as an Army officer on Wednesday, 12th April 2006. The Queen, accompanied by The Duke of Edinburgh, took the salute at the Sovereign's Parade at The Royal Military Academy Sandhurst. Harry's time in the military has greatly influenced his work and led to the creation of the Invictus Games. 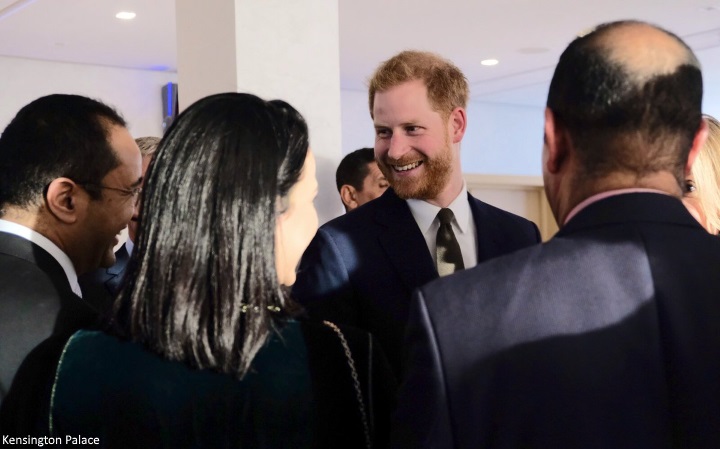 Ambassador Thomas Reilly shared photos from his residence ahead of the royal arrival. 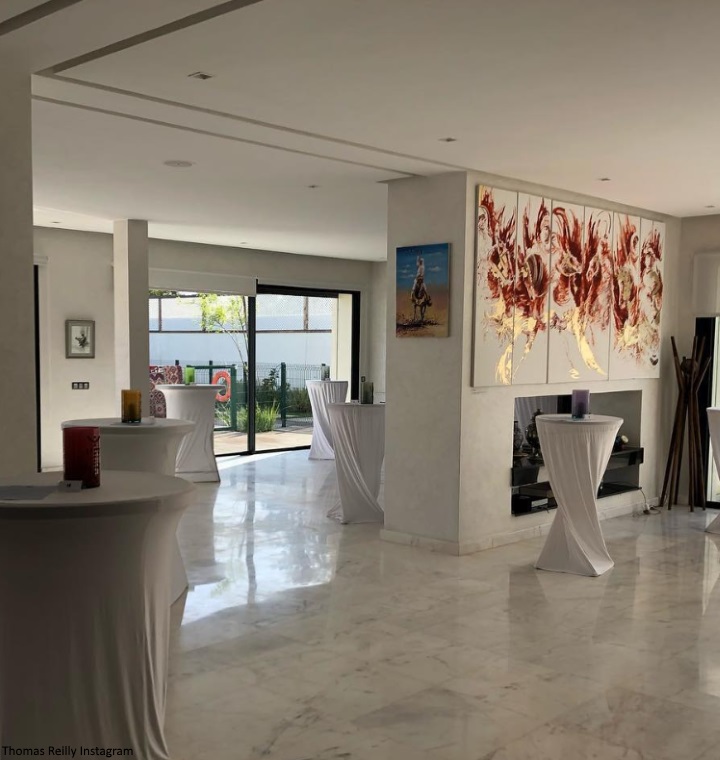 A look at the red carpet outside. 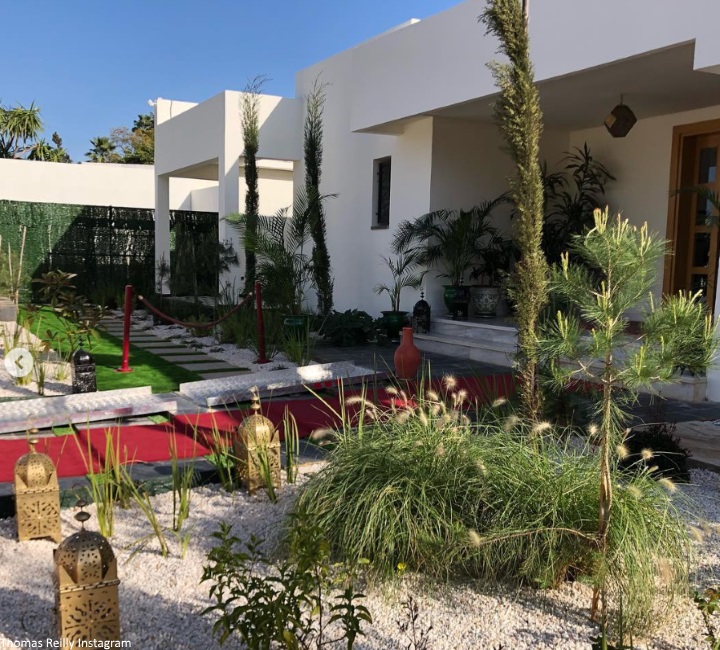 The Duchess looked radiant in a cream custom made Dior gown for the evening. The Moroccan inspired kaftan style piece was a perfect choice for the occasion and another sartorial nod to her host country. Meghan's turned to Dior for several important events since the wedding and they've always succeeded in creating classic, elegant and timeless piece suited to the events she's attending. 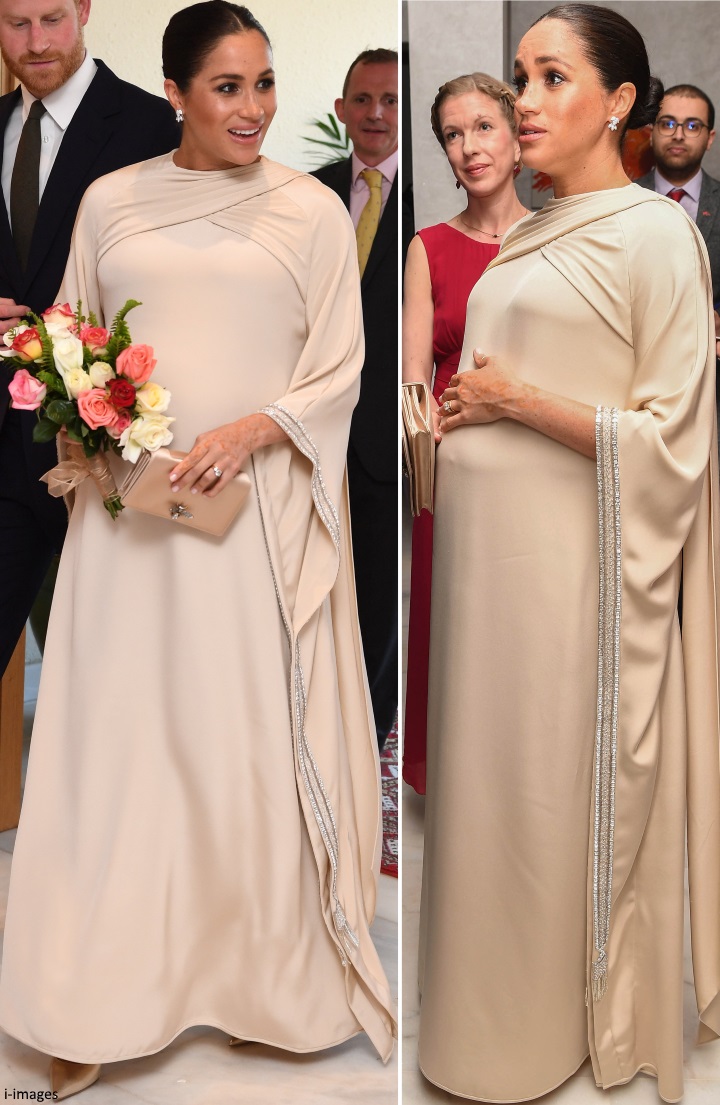 Meghan accessorised with her Birks Snowstorm earrings. The dazzling pair have been one of Meghan's go-to styles for evening functions over the past year. 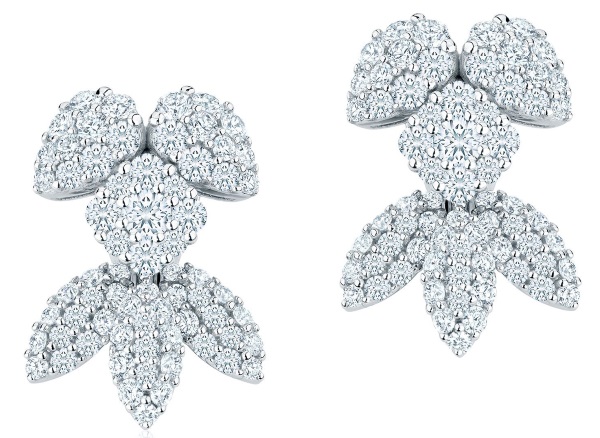 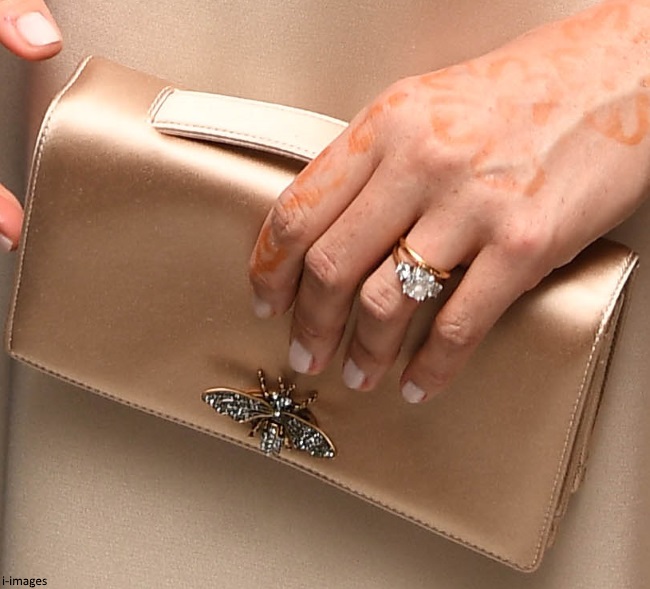 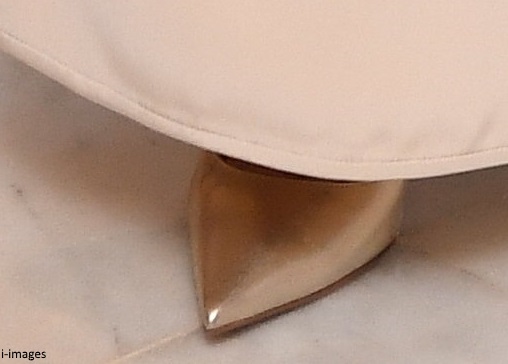 A closer look at Meghan's sleek updo and make up. 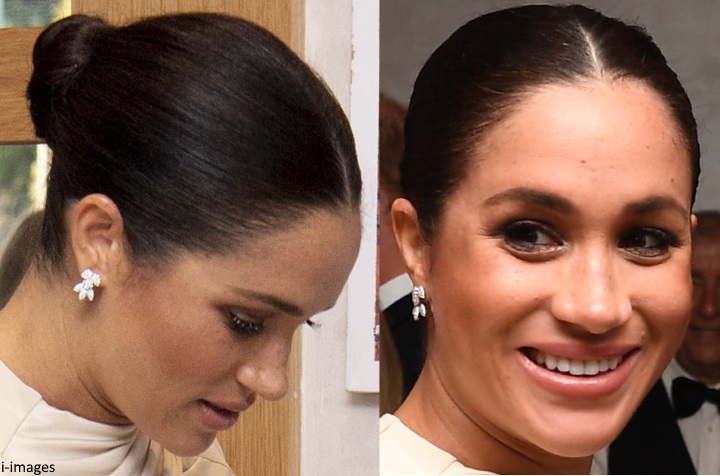 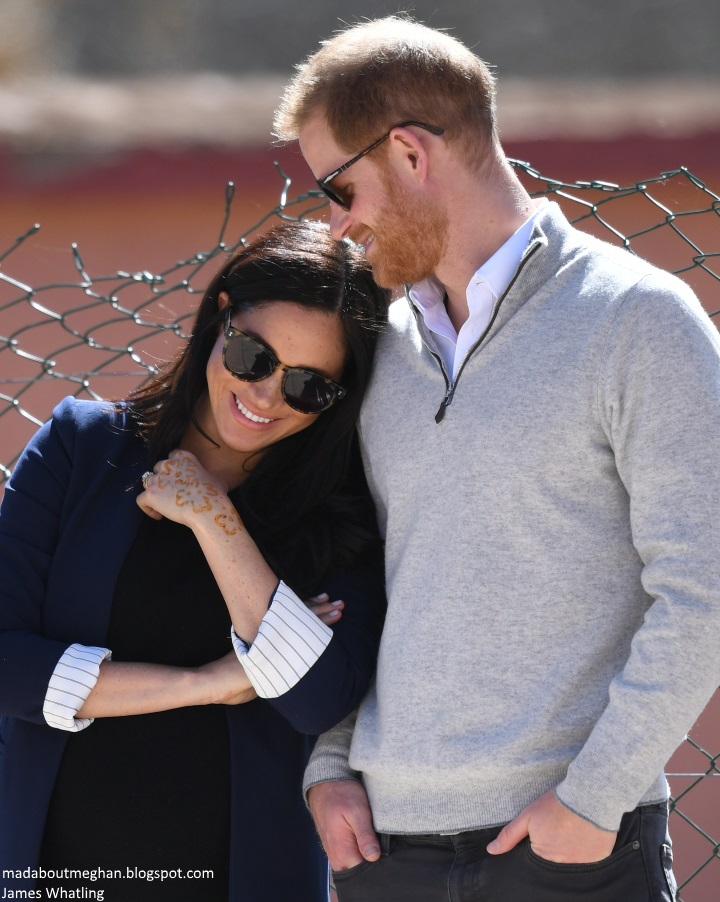 The Duke and Duchess have a very busy day tomorrow: