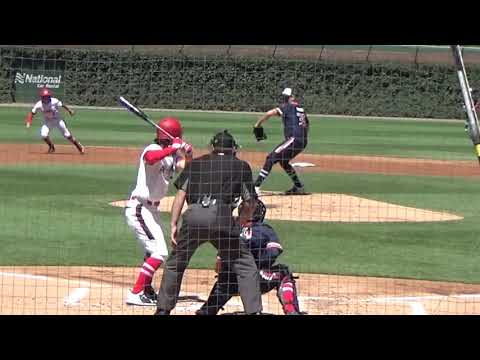 Today we’re going to get to a new profile in the 2020 Major League Baseball Draft Scouting Report series. Jared Kelley is going to be the first high school pitcher that we’re going to profile. He’s currently rated as the #11 prospect on the Baseball America list, #17 on the Fangraphs list, and #12 on the MLB Pipeline list.

The Texas commit saw his senior season at Refugio High School come to an end early this year, just like all of the other players in this class. But unlike some guys from cold weather states, Jared Kelley did get to take the mound and show his stuff to scouts in games before that happened. That showing did help improve his stock a little bit, which will get into below in his scouting report.

Velocity. That’s where the scouting report starts with most pitchers and that’s where it starts at for Jared Kelley, too. He sits in that 93-96 MPH range and can dial it up to 99 without the appearance of effort. Kelley is a bit unique from your typical hard-throwing high school pitcher perspective. Usually high school guys with outstanding fastballs don’t have much of a change up because they don’t need to develop one – their velocity and breaking ball is almost always more than enough and slowing down the bat speed requirement for a change up doesn’t make a ton of sense (in the sense that most guys you face can’t catch up to the fastball – eventually the guys you face will be able to and that’s when you really do need that pitch). But Kelley’s best pitch is actually his change up. It’s a potentially plus-plus offering that Fangraphs gave a future 70 grade.

The breaking ball entered the year as a clear third offering that lagged behind the others. But the pitch did improve from 2019 to 2020, though it still trails well behind the other two pitches and remains a below-average offering right now. Still, it showed enough that it may rate out as an average offering in the future with continued development. His ability to throw strikes stands out in a big way among the high school class and grades out as above-average in the future.

Where the concern could be

Right now the fastball and change up will play. But without improvements in his breaking ball he could be relegated to a spot at the back of a bullpen. That’s nothing to turn your nose up at, but it’s not what you’re hoping for, either. Fangraphs had this in their write up for Kelley about his curveball:

His curveball is occasionally average but more often is below, and breaking ball spin is seen as something a pitching prospect either has or does not, so the ceiling on that pitch is viewed as limited.