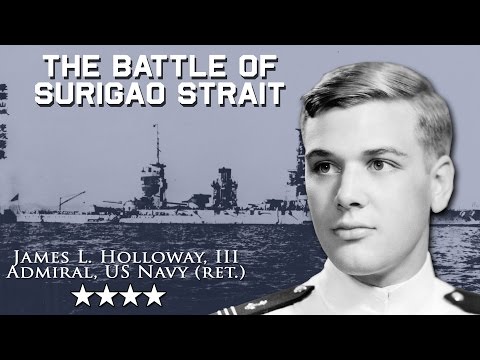 The Battle of Leyte Gulf (75 years ago today) is often cited as the largest naval battle of World War II, and by some criteria, the largest naval battle in history. The battle was not a single engagement, but a series of scattered battles across an area of more than 100,000 square miles of sea. The four main battles involved over 200,000 naval personnel.

The Imperial Japanese Navy launched Operation Shō in a desperate attempt to stop the Allies from landing forces in the Philippines, an action which threatened to cut Japan off from its supply lines in Southeast Asia and open mainland Japan to direct attack. This response ignited the battle and chaos of the Leyte Gulf.

On October 24, at the Battle of the Sibuyan Sea (the first of the major military engagements), US carrier-based aircraft sunk the Japanese Yamato-class battleship Musashi, one of the most heavily-armed warships ever constructed. Three consecutive waves of Japanese aircraft attacked the American aircraft carriers in the sea, but most were intercepted and shot down by Hellcat fighters.

In one of the most perplexing and still-discussed decisions made during the War in the Pacific, Admiral William “Bull” Halsey ordered his 3rd fleet to pursue the Japanese Northern force, which was nothing more than a decoy (its carriers were almost entirely empty of aircraft). This allowed the relatively unscathed Japanese Center Force, whose goal was to destroy the amphibious landing force in Leyte Gulf, to turn around from their own feinted retreat and break through the San Bernardino Strait, facing only 3 US escort carrier task units in the process. It has been noted by historians that Halsey was sleep-deprived during the battle, thus impairing his decision making and command (a topic still tragically relevant to today’s Navy, see:

Meanwhile, at the Battle of Surigao Strait (Oct. 25), Japan’s “Southern Force” was soundly defeated by the US Seventh Fleet’s Bombardment and Fire-Support Group. As the Southern Force attempted to gain entry into the Leyte Gulf, it ran into a deadly trap set by the Seventh Fleet: This was the last battle ever in which one force successfully “crossed the T” of its opponent ( en.wikipedia.org/wiki/Crossing_the_T ). In this engagement Japan lost almost all its Southern Fleet, including battleships, destroyers, and a heavy cruiser. Admiral James L. Holloway, III, a Chairman Emeritus of the Naval Historical Foundation, fought in the battle as a 22 year old officer, and recorded his reflection on that day for the Foundation in the 2014 video republished below.

The neglected Japanese Center Force that had broken out of the San Bernardino Strait set a course directly south along the Island of Samar, with the intention of fatally disrupting the American landing force. In its path were only three of the US Seventh Fleet’s escort carrier units, Taffy 1, 2, and 3 – a collection of small, lightly armored vessels. The Japanese Center Force, on the other hand, still possessed four large battleships, six heavy cruisers, two light cruisers, and twelve destroyers. The ensuing Battle off Samar on October 25 was one of the most astounding victories in the entire war – outnumbered, out-manned, and outgunned, American sailors nonetheless triumphed against all odds.

The Japanese commander, Admiral Kurita, ordered a general attack, splitting up his forces. The US force began to withdraw, while the light destroyers created a smoke screen to protect the vulnerable escort carriers. Rear Admiral Thomas Sprague ordered all carriers to launch their aircraft, no matter what they were equipped with, to harass the enemy pursuers. Poor communication and confusion among the Japanese ranks made the heavy ships easy prey for American torpedoes, which broke apart Japanese cohesion. So determined were the outnumbered American sailors that Admiral Kurita believed he was actually fighting the full force of Admiral Halsey’s fleet, not a small task force – in response, Kurita ordered his force to retreat, and the American landing forces were thus allowed to proceed unhindered.

In October 2014, twelve First Class Midshipmen of the United States Naval Academy (all History majors) attended the reunion of Taffy III in San Diego to conduct oral histories of those World War II survivors from the Battle off Samar. The above documentary reflects part of that work.

The Battle of Leyte Gulf was a devastating loss for the Japanese Navy, which was afterward incapable of mounting any further serious naval counter-attacks against the Allied forces in the Pacific.
In total the United States lost seven warships, including one light aircraft carrier, two escort carriers, two destroyers, and two destroyer escorts. Japan, however, lost twenty-six warships, including three battleships. Several other warships were also damaged beyond repair and were later scuttled. The United States suffered approximately 3,000 casualties, while Japan suffered nearly 12,500.

We commemorate the brave actions and sacrifices made by so many thousands of sailors 75 years ago, and we are looking forward to a fantastic event tomorrow morning at the Decatur House to further honor this battle, and hear from historians and family on what this battle has meant for the Navy, the country, and the world.
If you would like to learn more about the Battle, please join the Naval Historical Foundation on October 25th at the historic Decatur House in Washington, D.C.: