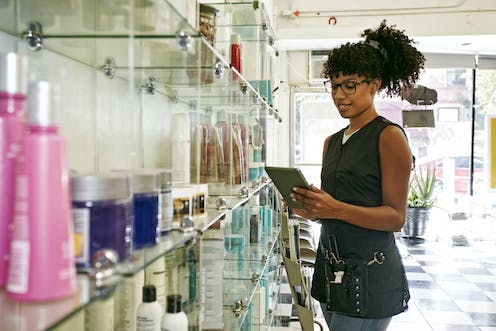 Black women prefer hair products marketed with them in mind

The Research Brief is a short take on interesting academic work.

This line of thinking raised several questions for me: With the fairly recent launch of an ethnic corporate product line, Pantene’s Gold Series Collection, are black women feeling the love? When faced with choosing between this new corporate option and Shea Moisture, a brand perceived to be black-owned, where does their allegiance lie? And if what people buy is an expression of their identity, then which brand best reflects black female consumers’ truest sense of self? Our study builds on a conceptual model to test these questions.

Academic literature on black consumer identity is pretty sparse, or more often focused on highlighting important but troubling research insights – such as the relationship between targeted, high caloric food marketing and health disparities. There is a deeply rooted relationship between how black women style their hair, their personal identity, their self-esteem and their health. This is especially significant considering the ways black hair is politicized and policed in public spaces.

For black women, hair is linked to racial and gendered psychological traumas and joys. It is also particularly important to note that recent scientific findings revealed black women are at an increased risk for a number of illnesses due to toxic chemicals commonly found in black hair care products.

How we do our work

Under the guidance of Sylvia Chan-Olmsted, director of Media Consumer Research at the University of Florida, my colleagues Brett Ball, Kelsy-Ann Adams and I developed a conceptual model, which is a visual representation of a social or physical process. Ours was intended to explain a specific consumer experience.

We began with the idea that individuals and brands have unique identities that build on each other. This means that people buy products or services that appeal to their values and beliefs, while brands attract consumers that support the identity they aim to project to the public. Literature uses the term “consumer-brand identity,” or CBI, to define that harmonious relationship. We believed strong CBI would lead to positive attitudes toward the brand, increasing the likelihood of purchasing a brand’s products. We collected data to test our model.

Because a great deal of advertising research that is focused on black women is influenced by disparities – such as lack of visibility in ads, gender and racial bias, etc. – our approach engaged black women as participants in order to prioritize their voices and preferences. More than 300 women who self-identify as black answered questions about culture and their personal attachment to products from each of the two brands. The women in our study overwhelmingly preferred products from Shea Moisture. We concluded their preference is linked to strong CBI.

We don’t yet know how a multicultural focus in advertising is affecting marketing investments for black consumers, or whether diverse leadership in brand management can increase identity-based connections for broad audiences. Interestingly enough, these findings emerged in concert with controversial backlash from a Shea Moisture campaign about self-acceptance that dominantly featured white and mixed-raced models. We’re unsure how our participants made sense of this faux pas or how black consumers generally are negotiating their identity in a more multicultural marketplace. Also, Pantene has been around for ages, but we don’t know if our participants were as aware of the Gold Series products compared to Shea Moisture products, which have been around longer.

What else is happening

Although our research was very specific, reactions to black hair are broad and deeply mixed. Identity-affirming, artistic representations like the Oscar-winning film “Hair Love” exist in stark contrast to discriminatory hair policies. And despite Solange’s melodic appeal, uninvited hands are still making their way atop the heads of black women, as witnessed in this viral encounter.

However, there’s hope with legislation like the CROWN Act and states making the move toward enacting hair-protective policies to combat workplace bias.

What’s next for you

Our hope is that our work will help spark more inquiry on black consumers that leads to the creation of more desirable messaging, content, products, policies and programming.

[Deep knowledge, daily. Sign up for The Conversation’s newsletter.]

Yewande O. Addie does not work for, consult, own shares in or receive funding from any company or organization that would benefit from this article, and has disclosed no relevant affiliations beyond their academic appointment.

Black women prefer hair products marketed with them in mind