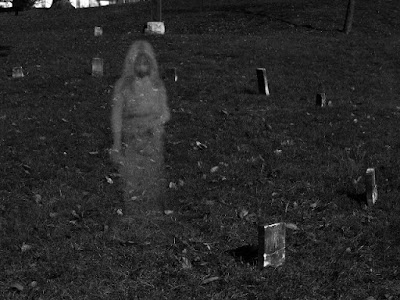 While not part of the core BX roster of monsters, ghosts are in the Moldvay/Wells Basic series module Palace of the Silver Princess. You can also find a version in the Labyrinth Lord Advanced Edition Companion,  but that always struck me as more of a 1st editon version ported over, so I'm sticking with the B3 version (I'm working from a pdf of the orange cover, if they are markedly different in the green cover version, please let me know).
Ghost (from B3)
AC: 1
HD: 5
Move: 150' (50')
Att: 1 + Aging
Dmg: 1d6
No. App: 1d4
Save: F5
Morale: 12
AL: C
Ghosts are (obviously) a type of undead, and can be turned as wights. Their attacks have a 50% chance of aging the target by 1d8 years due to fright. What's odd is that -while described as translucent- there is no mention of them being incorporeal or requiring any special weapons (i.e. magic or silver) to strike them. I assume the standard undead immunities, such as charm and hold spells, are still in effect.
Overall I am unimpressed by this listing. Other than some mention of them haunting certain types of locales and the idea that rich and powerful people become "powerful" ghosts in the afterlife (whatever that means!), it's basically a GINO (Ghost In Name Only). The Rules Cyclopedia's "Haunt" offers some more flavor, but it's still basically more monsters.
I am record saying that the undead's scariness should be more psychic than physical. I don't feel that the classic D&D Ghost delivers on this one. I do feel that it has a lot of potential, though.
For example, the aging effect is a nice twist, but it's a pity that there is so little in the rules to make this really matter to the PCs. Sure the DM can make a ruling, but it's unlikely to make much difference unless a PC gets hit several times. This is certainly possible, but in practice how does the DM decide when the unlucky character has burned through his mortal coil? Or aged enough to affect scores, etc.? An on the fly ruling here can feel a bit arbitrary to the player if it's his PC on the line. I know that other editions do cover this, but it's still a weak link for the BX version IMO.
Instead of just aging, what if there was some other effect? Maybe the PC literally dies of fright or "System Shock" from aging several years in an instant? Save vs. Death Ray/Poison or your heart fails.
I would keep the notion of ghosts being tied to something in the material world. It may be a place, or an object, or their own remains. It may even be their descendants (or those of their killer's!).
Of course, the lack of "incorporeality" may just be a typo or oversight in the listing. Let's just put that back in, shall we? Like spectres, they have no solid bodies. I might also suggest that they have a higher chance of surprise (1-4?), due to popping out walls and such. Magic or silver to hit them seems appropriate as well. I would also give it the ability to turn invisible so it can toss things about poltergeist-style.
Finally, it may make sense to abandon the idea of the ghost as a "monster" altogether and think of it like a trap or puzzle. It is an anguished soul seeking release. The PCs could vanquish the spirit by laying it to rest. Maybe they need to bury its remains in consecrated ground or bring its killer to justice. Who knows? But it seems a heck of lot more spooky than some glow in the dark cookie cutter stat block. 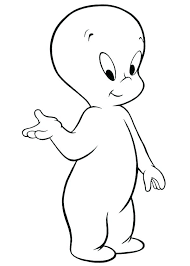