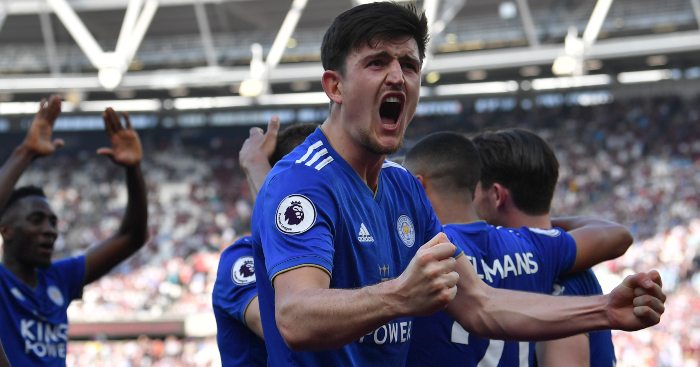 Harry Maguire is a man in demand but, as it stands, he is going nowhere. Literally, rather than metaphorically, because the centre-back and Leicester are on to a good thing together. If that is to change, then the responsibility for breaking the current impasse around the England star falls very much on Maguire’s suitors.

There are only two and both are casting envious eyes towards the King Power Stadium from Manchester. United and City are working through very different summers following hugely contrasting seasons, but the one thing the derby rivals share is the need for a top-class centre-back.

There aren’t many around. United have been linked with a few – Matthijs De Ligt, Toby Alderweireld, Kalidou Koulibaly, Samuel Umtiti and Issa Diop – but Maguire appears to be their primary target. For City it seems the 26-year-old is their only target.

You can’t blame United for keeping their options open because their need is so bleeding obvious. Jose Mourinho recognised a gaping void in the centre of his defence a year ago, but Ed Woodward reckoned he knew best. The United boss was sacked in December with his browbeaten, barely-arsed team having conceded 29 goals in 17 league games at an average rate of 1.7 goals per game, giving them the fifth-worst defensive record in the league. They had shipped only 28 during the entirety of the previous Premier League campaign.

It didn’t get much better under Ole Gunnar Solskjaer, with that ‘goals conceded’ figure dropping to 1.4 per game despite a run that saw United lose only one of their first 17 matches under the caretaker boss. The conclusion is clear: Mourinho was right, United need a top-class centre-back. Perhaps two.

City’s need is rather less desperate, especially when you consider that the champions conceded only one more goal than the Liverpool defence which was lauded as the best in Europe. But Pep Guardiola is short on quantity rather than quality. Vincent Kompany’s departure leaves a void while Nicolas Otamendi is said to be considering following the former City skipper out of the Etihad door.

From four quality central defenders, Guardiola is facing the prospect of being down to two. And doubts still persist over just how much faith he retains in John Stones.

The England centre-back endured a miserable Nations League campaign but his problems began well before the end of the domestic season. Stones started only two of City’s final eight Premier League games and featured in none of City’s Champions League knockout matches. Prior to being dropped from the match-day squad for the Manchester derby at Old Trafford in April, he had started just three of the previous 15 games in all competitions, with 33-year-old Kompany trusted instead to guide City’s defence through the run-in.

The preference for Kompany suggests Guardiola would not be too concerned by the absence of rapier-like pace the City manager identified in Maguire in November 2017, when Amazon’s behind-the-scenes documentary showed him telling Kevin De Bruyne to look for space around the centre-back because “the guy is not fast”.

Maguire has other attributes Guardiola demands in his centre-backs. Explaining his tendency to rotate in the centre of his defence, the City boss said: “Sometimes I play Nico and Vincent because they are both amazing at winning duels. Defensively, winning duels, both are perfect. In some games, I need that. In other games I need more of the build-up.”

Maguire does both. He won 73% of the 249 duels he competed last season – Otamendi was City’s best with 66%. In possession, Maguire has demonstrated his credentials for England, with Gareth Southgate encouraging his defenders to play like Guardiola’s. Maguire looks more comfortable with that brief than Stones.

Still, despite the fact that Maguire looks a seamless fit and a ready-made solution for both United and City’s problems, both clubs are apparently refusing to budge on their £65million valuation of the England defender. Which isn’t going to satisfy Leicester now or any time before the deadline.

The Foxes are refusing to let Maguire go for anything less than the figure Southampton squeezed out of Liverpool for Virgil van Dijk. The Dutchman has made £75million look a bargain, though few anticipated the instant and substantial impact he would have upon the Reds’ ropey rearguard.

Leicester’s valuation is entirely justifiable and given they have no pressure to cash in on Maguire, the price won’t be coming down any time soon. So United or City must come up.

There have been reports that Maguire would prefer a move to City, which may explain the champions’ stance. City have spent big in recent years but they have yet to go above £60million for anyone. They will break that barrier for Maguire but their desire to avoid straying closer to the very top end of the market is clear. If City are aware of Maguire’s preference for them over their neighbours, then they can afford to bide their time and prod Leicester into reaching a mutually agreeable deal.

United are negotiating from a far weaker position. Their tactics didn’t work with Crystal Palace, who eventually wrung out of Ed Woodward the amount they wanted from the start for Aaron Wan-Bissaka, despite the absence of any bidding war. A similar approach won’t wash with Leicester.

Woodward appeared reluctant to get involved in the fight for De Ligt’s attention for fear of being used but playing it cool over Maguire will only play into City’s hands. The only ace up Woodward’s sleeve is United’s financial clout and now – with Maguire at stake – is not the time to get shy. Coming up closer to Leicester’s valuation, above the sum City are comfortable paying, seems to represent their best and only chance of success.

United cannot still have reservations over paying such a huge sum for a defender. They only have to look at Liverpool for a reference over the difference a top quality centre-half can make or, if they prefer to look closer to home, Rio Ferdinand offers an encouraging precedent for paying a record-breaking sum for a stopper.

And this is where United’s priority must lie. Though they need perhaps two more midfielders and a centre-forward should Romelu Lukaku leave, a more potent attack will be somewhat futile while the back door remains wide open.

Woodward kept the money in his pocket last summer and look how that turned out. Both City and United need Maguire but the champions can afford to take a more patient, prudent approach. United’s bargaining position makes this no time for penny-pinching, especially in the absence of credible alternatives.