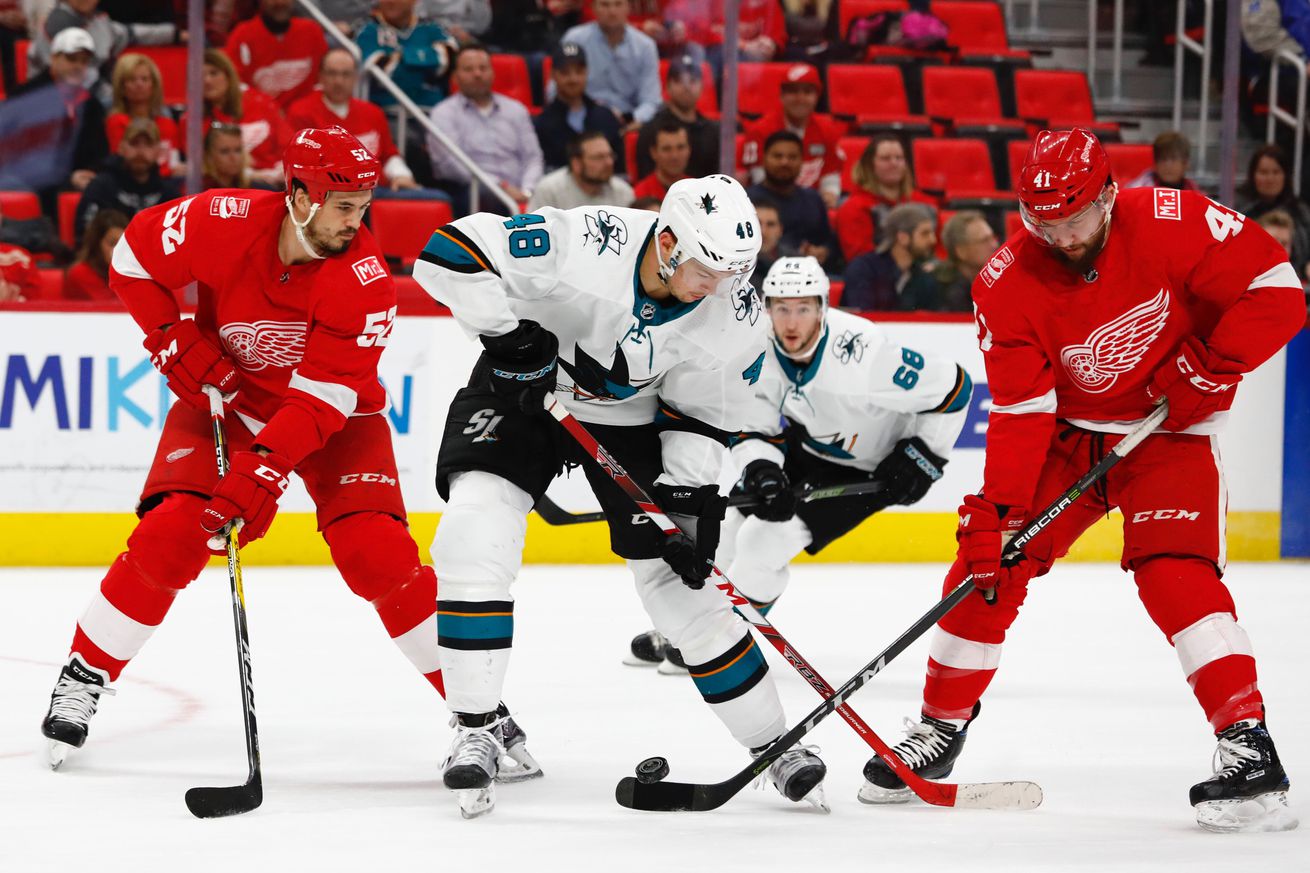 Joe Pavelski came up big in a come-from-behind win.

On the backend of a back-to-back, the San Jose Sharks were able to overcome a two-goal deficit to defeat the Detroit Red Wings, 5-3.

It was a rough first period for the Sharks who only generated five shots while losing the possession battle at even strength. The Sharks did score the first goal of the game, but their lead could only last so long. With the Red Wings dominating even strength play, it was only a matter of time before they got the puck past Aaron Dell, exiting the period with a 2-1 lead.

The Red Wings extended their lead to 3-1 early in the second period. But halfway through, the possession battle titled in the Sharks’ favor.

Brent Burns initiated the scoring with a shot from the point to cut the Red Wings’ lead to one. Later in the period, it took less than a minute for the Sharks to not only tie the game, but take a 4-3 lead courtesy of two goals from Joe Pavelski.

The third period was a bit quieter than the previous two, but there were plenty of scoring chances for both sides. Pavelski added an empty net goal in the final minute of the period for a natural hat trick to seal the win.

Now the Sharks head to Boston to face the Bruins after the trade deadline settles.

Hey everyone, Eddie here and I’ll be with you all for this matinee of hockey

6:02: Dell with the a quick save to keep the Red Wings off the scoreboard.

5:21: Goal. Darren Helm goes short-side to beat Dell and ties the game at one.

2:38: Another Dell save the denies the Red Wings a goal opportunity.

19:35: Radim Simek with a shot from the blue line, but Jonathan Bernier is there to gobble up the puck.

19:00: Penalty. Brenden Dillon heads to the box for high-sticking.

13:07: Dell once again making another save to deny the Red Wings a goal.

6:11: GOAL! Brent Burns launches a shot from the point off the faceoff to cut the Red Wings’ lead to one.

5:40: Power Play. Jonathan Ericsson heads to the box for tripping.

18:37: Sharks with a flurry of shots on Bernier, but are unable to score.

14:54: Thornton tried to setup Kevin Labanc, but to no avail.

12:26: Evander Kane with a wraparound chance.

10:52: Power Play. Sharks head to the man-advantage after the Red Wings are called for interference.

8:52: Red Wings are successful on the penalty kill.

7:34: Dylan Larkin nearly ties the game on the rush.

7:21: Penalty. Justin Braun heads to the box for tripping.

5:21: Sharks are successful on the penalty kill.

1:20: Bernier leaves the net for the extra attacker.

1:00: GOAL! A backhand shot from the middle of the ice for the empty net net goal earns Pavelski the natural hat trick.

The San Jose Sharks can’t afford to spend much time dwelling on being shut out by the Columbus Blue Jackets yesterday afternoon, as they’ll face the Detroit Red Wings today, in their third of four games on this road trip.

In their 4-0 loss to the Blue Jackets, Erik Karlsson left the game early after re-aggravating his groin. During his post-game press conference, head coach Pete DeBoer couldn’t offer any more information on Karlsson other than there being no timetable for his return. But with the back-to-back, it’s better to be safe than sorry, so Karlsson is unlikely to suit up today.

For the Red Wings, they currently sit at the bottom of the Eastern Conference. Only the Ottawa Senators have fewer points. The trade deadline is at noon tomorrow and the best the Red Wings can hope for is to be sellers, continuing their rebuild and looking to trade their veteran assets for draft picks and young players.

Finish your brunch and get ready for today’s #SJSharks game. The names are right, but it’s all projected on where they go. pic.twitter.com/zhnd15gBC3

Puck drop from Little Caesars Arena is at 12 p.m. PT/ 3 p.m. ET, broadcast on NBC Sports California in the Bay Area and Fox Sports Detroit in Michigan. You can tune in to the radio call on 98.5 KFOX or through the Sharks app.