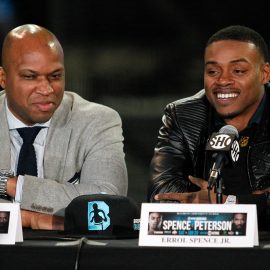 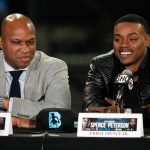 Right off the bat, I admitted to Derrick James, trainer of Errol Spence, that my knowledge on the subject is limited.

Spence vs. Garcia, Saturday night in Texas, and on Pay Per View, who will win, and how?

“I don’t know, Derrick, and I’m not gonna pretend to know, to try and pretend to seem smart,” I said in a Thursday night phoner. “Lemme ask you this…Do you KNOW? Does Errol know, as much as can be known, with the understanding that things have to play out?”

“We know,” the ultra low key, serene, even, tutor answered.

“One thousand percent, and the reason I say that is the way we pushed, we sparred 180 pound guys,” said James, who campaigned himself as a super middleweight, from 1992 to 2008. “I’ve seen it in the gym, seen sparring.” A thousand percent is the answer I’d expect from James. I see him as an ultimate loyalist to guys he works with, because he invests his soul into this stuff I dare say more than a goodly number of trainers. That’s not a knock on other dudes, but James is made different. From the place he’s come from, a humble upbringing, living in circumstances that statistically pegged him for a career and life track much more dreary than what he’s on, James is a blue-check good soul success story. And it can go a couple ways from there, someone can allow their success to inflate their ego, or they can allow room to admit that fate has smiled on them. They can enjoy their prominence with a foundation of humility—and that’s James.

Because of the humility, my sense is that loyalty is of heavy import to James, who grew up and lives in Texas. Once a rapport and trust is established, I think, James works to maintain it, and appreciates it, doesn’t take it for granted, and nurtures it. You won’t see or hear him throw one of his guys under a bus, or even nudge the body in that direction.

Back to the call…I pushed, just a bit. I asked for some evidence. Because, I admitted, I don’t see how someone can fly out of a speeding car like 50 feet, roll and tumble, and there not being detrimental effects even a year later. Of course, James said, he wanted to assess with his eyes how Spence’s body and mind were functioning once he got back to the point he was able to go back to the gym, and engage in contact drilling. “You know the saying, time heals all wounds,” he asked rhetorically. That’s what it was, time passed, the athlete spent his time doing the right thing to maximize healing and the kid healed up.

Yeah, to me it signifies that, I don’t know, maybe a higher power has tagged the PBC fighter Spence for some extra blessings…and also that he’s young, super strong, and yes, luck was with him on that Texas highway.

“The first day we sparred, it was ten rounds, two guys, and I liked what I saw,” James said. “I didn’t even really care that much how he looked, but I saw the fortitude was there. That he would strive for excellence. And then I knew, however good that day was, tomorrow he could be twenty times better. His work ethic was there.”

And it has been touched on, it’s not that his work ethic wasn’t there for the lead-up to the fight he had before his crash, against Shawn Porter, but, c’mon now, Errol has been at the top of the game for awhile now. It is exceedingly rare for anyone in that position to be able to match exactly their ambition and dedication which they had at the start of the journey. Silk pajamas, people.

Now, for the record, James said Spence didn’t come into camp this time right near 147, either. “I teased him about it,” he said. “But we’ve been doing it since March, and then with COVID, camp closed for awhile, but from March to May, he was ripped. The summertime, we started picking up the pace.” Bottom line in, he sounded quite happy with what he saw in Errol’s body, and mind.

Here’s a mind boggler for you. Errol was a teenager when he started working with James, OK? “And for three years, we didn’t have a conversation,” the trainer said. The first time they actually conversed, he said, came when Errol was overseas, at an amateur tourney. “And remember, we had trained seven days a week. We trained during holidays.”

So, point being, there’s not a lot of wasted words between these guys, even now.

When Spence says something, it isn’t chatter. “He said, recently, this is gonna be a one sided performance,’’ James continued. “That means he’s gonna kick ass.” He shared that Spence is a realist, not a dreamer, or mental drifter, or one who can delude himself. He looks at his situation, and gives an honest summation of what’s what.

So, to circle back, that helps me comprehend why James says he a thousand percent sure that Errol is healed and ready to rock and roll and drop peak-Spence thunder on Garcia. Because his track record indicates that when he uses a phrase like ‘one sided performance’ it’s because he knows that’s what’s to come on this PPV.

And so it sounds like there’s no possibility for a scale fail? “He was 147 yesterday (Wednesday),” James told me.

Hey, it’s boxing, theater of the unexpected. I still need to see for myself that the body holds up for Errol Saturday.

Trust, but verify, that’s one of the most useful adages to stick to as a journalist. But put it this way, I’m off my hedging fence, and I’m thinking Danny won’t be so fortunate as to see a diminished Spence in the ring tomorrow.

The post Trainer Derrick James Really KNOWS That Spence Is More Than Ready To Rock Saturday appeared first on The Ring.