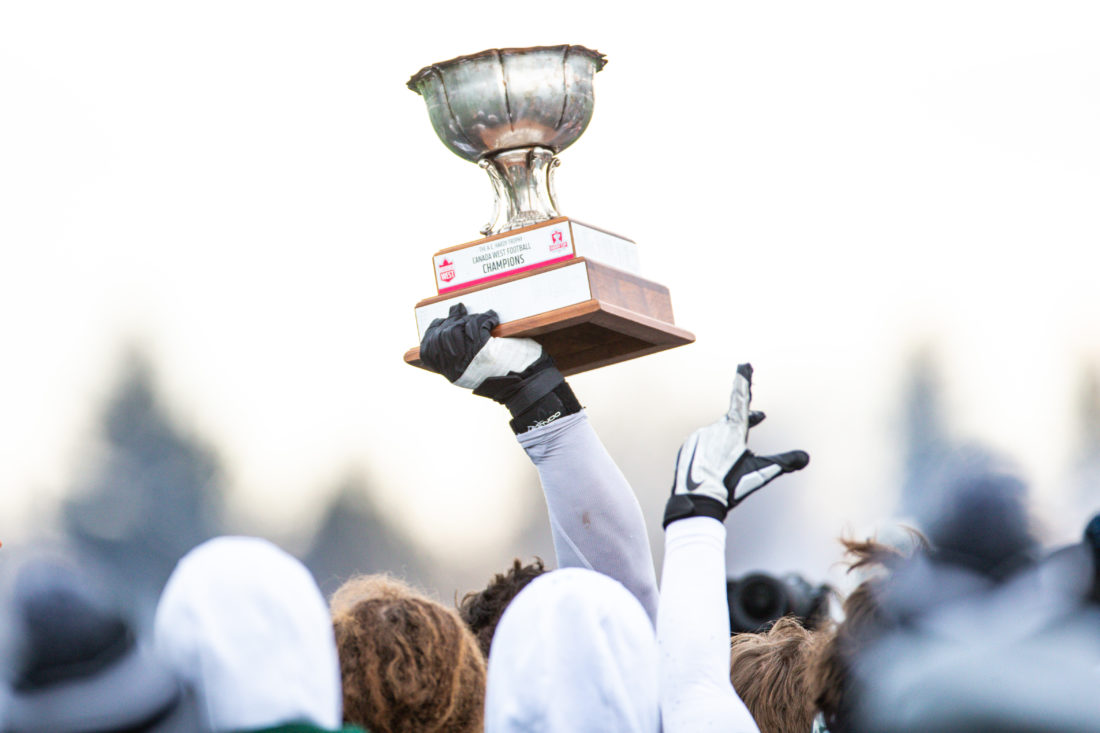 The University of Saskatchewan Huskies Football team are the Hardy Cup Champions for the 20th time in program history after defeating the Manitoba Bisons 45-17 at Griffiths Stadium on Nov. 20.

Despite a 28-point rout of the Bisons, it was far from smooth sailing to start the game. The energy and uproar from the Huskies faithful fans was quickly quieted when fourth-year quarterback Mason Nyhus’s pass was intercepted by the Bisons on the fifth play from scrimmage.

This early turnover led to an immediate two-play Bisons scoring drive, causing the Huskies to lose the momentum they had to start the game.

A safety, along with a 53-yard touchdown run followed by a forced fumble, capped off an impressive first quarter for the Bisons, outscoring the Huskies 16-2.

This touchdown run would be the final Bisons offensive score of the contest as the Huskies followed a lackluster start to the game with three quarters of pure dominance, outscoring the Bison 43-1.

In the opening drive of the second quarter, fourth-year running back Adam Machart reached the end zone, cutting the Huskies’ point deficit to seven. This touchdown run set the tone for a formidable performance not only for Machart but the entire Huskies rushing unit.

In their previous match against UBC, the Huskies accumulated only 65 yards on the ground. However, they remained committed to the ground game against Manitoba, finishing the game rushing for nearly 400 yards.

Machart showcased why he was a Canada West all-star as he displayed great mental toughness. He rebounded from an early fumble to finish the game rushing for 223 yards and three touchdowns.

The Huskies added a field goal at the end of the quarter, cutting their point deficit to four.

The Huskies defence was excellent, not allowing an offensive score after the first quarter. The defensive unit finished the game holding Manitoba to less than 300 scrimmage yards, combining for three sacks, three tackles for loss and three interceptions.

It was fitting that two of the three sacks that shifted the momentum of the game came from all-star defensive linemen Nathan Cherry and Riley Pickett. The interceptions came from Cam Skinner and Lane Novak.

The Huskie defense was instrumental as they neutralized the Manitoba offence and had key takeaways late in the game. This set up the offence with great field position, allowing them to advance the ball easily.

The combination of the Huskies being able to run the football, along with the Huskie defence shutting out the Manitoba offence in the second half, allowed Nyhus to retake control of the game.

Rebounding from an early turnover himself, Nyhus rallied in the second half to finish with 220 passing yards including a 17-yard touchdown pass to all-star receiver Colton Klassen.

This victory showcased the team’s resiliency, determination, and mental fortitude, along with a surplus of talent on both the offensive and defensive end.

The Huskies continue their journey for the program’s first Vanier Cup in 23 years as they head to Montreal to play the Carabins in the Uteck Bowl on Nov. 27.