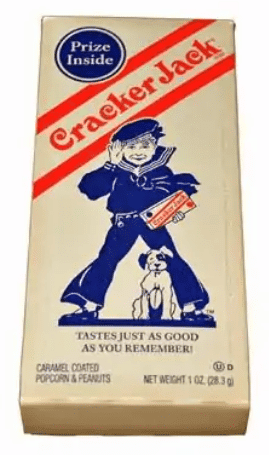 Make your Own Cracker Jack Snack

Cracker Jack has a long history.  In the 1870s the German immigrants Frederick and Louis Rueckheim sold popcorn on the streets of Chicago. They began to experiment by combining popcorn with several other products.

When the Columbian Exposition opened in Chicago in 1893, they sold a confection composed of popcorn, molasses, and peanuts, which they prepared in a small factory. After the exposition, orders for the confection rose.

The Rueckheims increased production, repackaged the product so that it would stay fresh, named it Cracker Jack, and promoted it nationwide.

There are conflicting stories about where the name came from.  The most common story is that salesman John Berg exclaimed the taste as “That’s crackerjack”. The   term “cracker jack” was commonly used in slang that meant “first-rate” or “excellent.”

Cracker Jack soon became a snack sold at circuses, fairs, and sporting events, like baseball. In 1908, the lyricist Jack Norworth and the composer Albert von Tilzer immortalized Cracker Jack in their song, “Take Me Out to the Ball Game”…

Unlike other fad foods, Cracker Jack survived. Throughout the early twentieth century the company expanded, opening operations in Canada and the United Kingdom.

By 1913 Cracker Jack was the world’s largest-selling commercial confection.  A major reason for its longevity was extensive national advertising, specifically focused on children, which included the small toy in every package.

Make your Own at Home

Sadly in recent decades sales of Cracker Jack have declined as other competing popcorn products have immerged. I have fond memories of Halloweens when we could get a few boxes of Cracker Jacks in our haul, but it can even be hard to find on store shelves these days.

However, you can bring back the unique molasses taste by making your own. This recipe comes from Todd Wilbur who is dedicated to replicating popular commercial foods with natural ingredients. 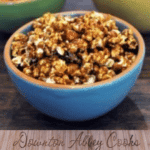 Make Your Own Cracker Jack

You can make your own Cracker Jack, a popular snack made of popcorn and molasses first sold on Chicago's streets by German immigrants in the 1870s.
Course Snack
Cuisine American
Servings 15 cups
Calories 218kcal
Author Todd Wilbur

Make your Own Cracker Jack Snack