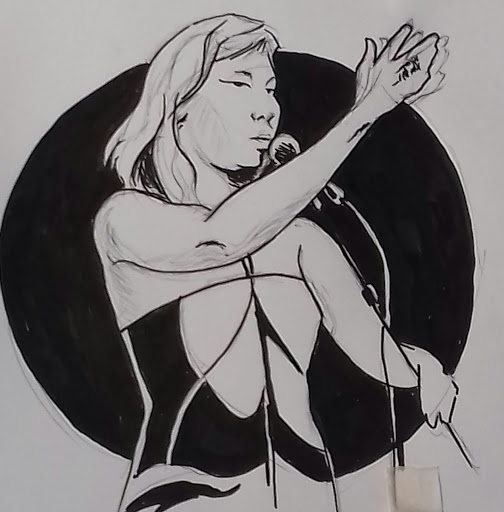 
The first SCBWI London Masterclass of 2019, on 16th March, is all about harnessing the power of poetry for all forms of children's writing and is being run by leading performance poet Jasmine Gardosi. Co-organiser Cath Jones recalls seeing the poet at Glastonbury Festival and having a goosebumps moment.

I first got involved with volunteering for SCBWI way back in 2013 when I started organising the Author Masterclasses. Each year, Alison Smith (aka Ally Sherrick) and I try to put together the best possible line-up. But have you ever wondered how we decide who to invite?

We’re always open to suggestions for possible speakers. Both of us are also always on the look-out for talented individuals whose advice and expertise SCBWI members might find beneficial. However, when I went to the Glastonbury Festival in 2017 I was not expecting to spot a future speaker.

The clue is in the full name of the festival — it’s actually the Glastonbury Festival of Contemporary Performing Arts. The BBC TV coverage gives only a tiny glimpse of what goes on. Did you know there is a Poetry and Words stage? That is where I spotted Jasmine Gardosi, a slam poet and our March Masterclass speaker.

Her performance at Glastonbury was mesmerising. She had the whole audience focussed on and interacting with her poetry. It was a goose bumps moment. She was unlike any other poet I had ever watched, definitely my 2017 Glastonbury highlight. I managed to have a chat with her after her final performance and when I asked if she’d be interested in delivering a Masterclass to children’s writers, she said YES!

I was thrilled. Why not take a look at some of her performances online? I think you’ll be wowed. She has been featured internationally by Button Poetry, the world's largest spoken word platform, after being awarded an Honorable Mention for Outstanding International Entry in their 2018 video contest. She’s one of the only UK poets to ever be published by them.

Jasmine is the current Axis Slam Champion and former Cheltenham Poetry Festival, Mix It Up Midlands and International Pangaea Poetry Slam winner. She has appeared on BBC Radio 3’s The Verb, BBC Asian Network and of course the Glastonbury Festival. A BBC Slam Finalist, she has also been shortlisted for the Outspoken Poetry Prize for Performance and for Birmingham Poet Laureate 2018/20.

As well as performing regularly around the UK, she is expanding her international reach with performances and appearances abroad. Her commission for Standard Chartered saw her showcased globally as part of International Women's Day 2018. A previous BBC Arts Young Creative and Poet in Residence at the Shakespeare Birthplace Trust, she has worked on digital storytelling project New Birmingham and is collaborating with Autin Dance Theatre on a sexual health show combining dance and spoken word.

Jasmine frequently works in schools and community settings. She specialises in running LGBTQ+ and sex education workshops for young people, combining creativity, poetry and sex education. She also runs school clubs and leads CPD training for teachers. I am certain that writers and poets from picture books right up to YA will gain a huge amount from her Masterclass.

I’ll finish with part of the review that the Poetry and Words blog posted about her 2017 performance on their stage:

“Jasmine has a kind of unadorned confidence that becomes astonishingly compelling on stage.  She is one of those poets who seems to grow a foot (a decilitre? A kilogram? I’m American. Anyway, a lot.) when she opens her mouth on stage. And the language: it’s gorgeous. ... She puts a new spin on the facilitator’s tool of asking an audience to raise their hands for a series of scenarios, with a cleverness that just gets more clever the more times you hear the piece… Wherever she says to go, the audience follows.”