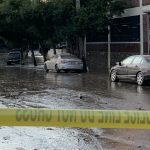 Business owners along Main Street are still dealing with the aftermath of Hurricane Ida one month later. Boarded up windows, closed signs, and caution tape are all common sights up and down the popular street.

In September, the Schuylkill River overtook Manayunk, bringing strong winds and flash floods to the area. Seventeen feet of water filled the streets, submerging cars left and forcing residents to be rescued from their homes.

For the business owners, the recovery process is not an easy one. Some are looking at months of clean-up before they can reopen.

John Godsey, owner of Quaker City Motor Sport, lost almost all of the 200 motorcycles in his dealership. His computers were wiped out, most of his inventory lost, and paperwork ruined, adding up to $2 to $3 million dollars in damages, he estimated. Godsey said it will probably be a few months before his doors will open again.

“The bikes were strewn over the whole dealership, water was dripping, all of our computers were floating, I mean, you’ve never seen anything like it,” he said.

When the water first receded, Godsey described the showroom as “the aftermath of a tornado.”

Godsey said the community has played a large role in the cleanup process.

“That’s the key to the whole thing. We’re getting a lot of support from our customers, which is huge,” he said, adding that his employees “have really stepped up to the plate.”

Just down the road from the motorcycle dealership is G.J Littlewood & Son, the last operating textile mill on Main Street. The owner, Bob Littlewood, said it took two weeks to fully remove 18 inches of mud from the mill.

He said they are looking at about four to six months of recovery efforts, which include removing the machinery, cleaning it, repairing it, and putting it all back together to resume operations.

The cleanup will be costly.

“It’s hard to say, but I would say probably a million dollars,” Littlewood said.

The business has been in the family for more than 150 years, surviving even the flood of 1869, the city’s worst.

“We’ve dealt with floods before, but nothing of this catastrophic amount of water,” he said. Littlewood said he hopes to return to normal operations, but it is unclear if that will happen.

“We want to get back up and running for our customers,” he said.

Please email any questions or concerns about this story to: editor@philadelphianeighbors.com.