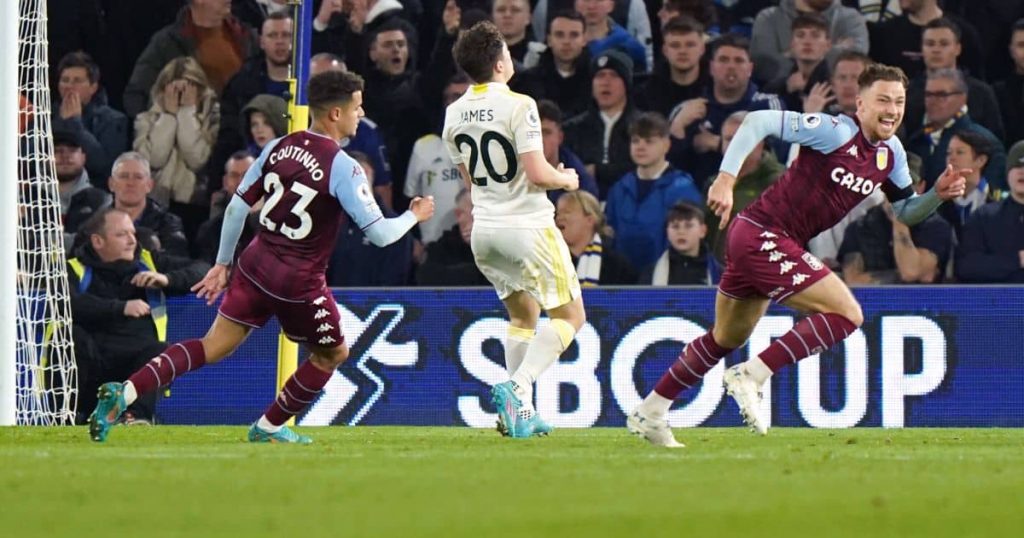 Goals by Philippe Coutinho, Matty Cash and Calum Chambers gave Aston Villa a comfortable 3-0 victory over a Leeds side that again failed to hit the heights.

Elland Road was rocking but, despite an improved second-half display, the hosts failed to pick up any points. It leaves them just two places above the drop zone but having played more games than the two clubs directly below them. Villa sit ninth and continue to impress under Steven Gerrard’s guidance.

Jesse Marsch made just one change from the side that lost 1-0 to Leicester last time out as Adam Forshaw replaced Mateusz Klich in midfield. But the American tactician made it clear that substitute Patrick Bamford would make his first appearance since December.

Villa chief Gerrard echoes his Whites counterpart with only one change from the side that thrashed Southampton. Lucas Digne replaced Ashley Young at left-back in a side seeking a third straight top-flight triumph.

Coutinho has been outstanding for the Villans and the hosts knew they had to stifle the Brazilian. And they were lucky he fluffed his lines early on with an attempted volley.

But they were not so fortunate on 22 minutes as the former Liverpool man opened the scoring. There was an element of luck about the goal as Coutinho’s shot took a hefty deflection off Luke Ayling to loop over Illan Meslier.

Cash was credited with the assist after rescuing Digne’s cross and picking out the South American. Both sides looked cagey early on but the goal clearly gave Villa confidence.

With Coutinho at the heart of most things, they piled pressure on the Yorkshire side’s goal. Cash saw his header fly over the bar while Douglas Luiz’s free-kick was dealt with by Meslier.

Marsch became increasingly vocal on the touchline as his charges failed to get going. His mood was not helped as both Stuart Dallas and Jack Harrison hit the first defender from set-pieces.

John McGinn forced Meslier into a smart save as the first half drew to a close. And the Frenchman was called into action once again on the stroke of half-time as Luiz tried his luck from 25 yards.

The scoreline was not what the home fans wanted, but of more concern was another poor display.

After such a limp 45 minutes by his men, Marsch made a change, with Rodrigo replaced by Joe Gelhardt. And the switch appeared to have the desired effect as Leeds were much brighter after the break.

Gelhardt doesn’t turn 20 until May but had the confidence to let fly from 25 yards on 53 minutes. However, it was not his best effort and Emi Martinez saved comfortably.

Bamford’s last appearance was in a 2-2 home draw with Brentford on December 5 when he scored a 90th-minute equaliser. And the Leeds fans gave him a raucous welcome when he replaced Harrison on 58 minutes.

But it was Villa who earned the next chance with Meslier saving comfortably from McGinn on the hour mark. However, there was nothing that the France Under-21 shot-stopper could do five minutes later as Cash doubled the visitors’ advantage.

Danny Ings picked out the 24-year-old who cut inside before beating Meslier at his near post. Leeds had been the better side in the second period but paid the price for switching off at the back.

Any thoughts of a dramatic late comeback by Marsch’s men were soon extinguished as Calum Chambers scored his first goal for Villa.

And it was a spectacular effort that put the game to bed. Tyrone Mings laid the ball off to the former Arsenal man whose superb shot gave Meslier no chance.

To compound their misery, Leeds lost Junior Firpo to a nasty-looking injury. The Spaniard was stretchered off while being given oxygen, summing up Leeds’ current plight.

The post Marsch home debut ends in frustration as Villa far too good for lacklustre Leeds appeared first on TEAMtalk.