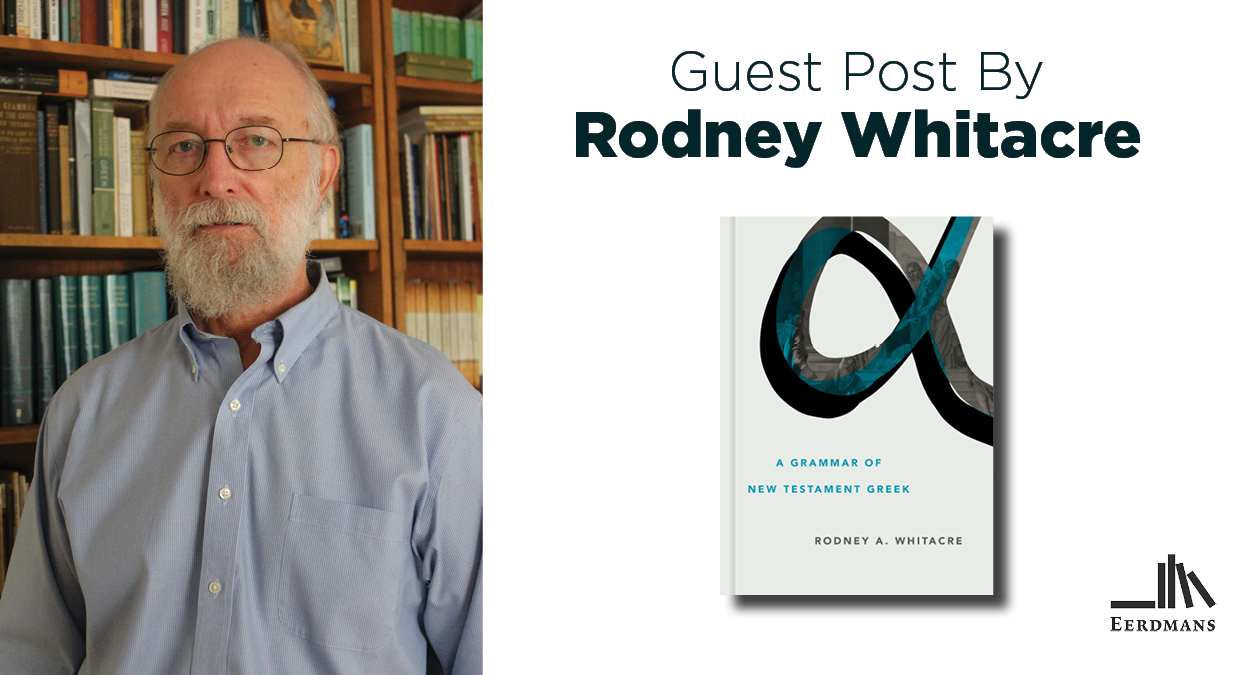 Meet This Book: A Grammar of New Testament Greek 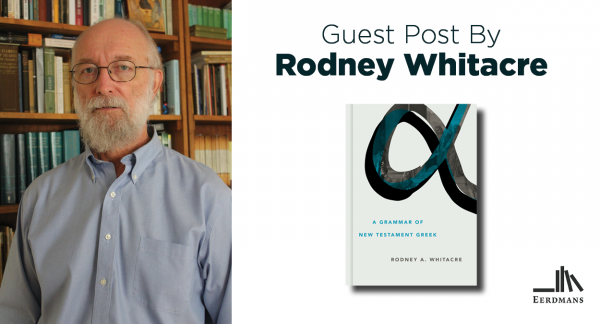 In today’s EerdWord post, Rodney A. Whitacre writes about the origin of his forthcoming book, A Grammar of New Testament Greek. His book is available for pre-order at Eerdmans.com, Barnes & Noble, ChristianBook.com, and Amazon.com.

This book came about through no fault of my own. I did not set out to write a beginning-intermediate grammar of Koine Greek. Rather, when I retired from seminary teaching I began work on a first year method for learning basic Greek. Since there are new methods coming out every year, it seems that the desire to write such a book is an occupational hazard for those who teach Greek. Having used a number of methods over the years I wanted to combine their virtues in an approach that is similar to one of the methods I used in the early 1980s, Reading Greek by the Joint Association of Classical Teachers (Cambridge, 1978, 2011). After working on such a method for several months I realized I was not going to be able to do it well, so I quit.

When I did not find any of the grammars entirely satisfactory for this purpose, I began writing a grammar specifically for this basic method.

After making that decision I sat on the back porch, literally watching the grass grow, and then remembered an article commending yet another approach to learning Greek. It suggested that one should begin with a general introduction to the language followed by a study of its details through reading a series of passages. Rereading the article, I found this suggestion very appealing. Since I did not know of such a method for Koine Greek, I began work on Learning Koine Greek Passage by Passage. My idea was to refer students to one of the grammars currently available for paradigms and explanations of the various grammatical features they met as they studied the target passages. When I did not find any of the grammars entirely satisfactory for this purpose, I began writing a grammar specifically for this basic method. Since students would encounter material that is not usually included in a basic grammar, this book included not only the basics but also much of intermediate grammar and even a few more advanced details.

After revising this method on the basis of using it in seminary courses I approached Eerdmans. They proposed publishing the grammar volume as a stand-alone beginning-intermediate grammar. I was happy with this idea, since I had thought the grammar could be of use more generally beyond its role in this quasi-inductive introductory method. So the grammar will soon be published as A Grammar of New Testament Greek (Nov. 11, 2021) while I continue to revise Learning Koine Greek Passage by Passage, as described on whitacregreek.com.

Since A Grammar of New Testament Greek was now to be a stand-alone grammar, I reviewed it to be sure it covered the topics most often included in such a book. Along with the usual content there are always further details and examples that could be added, so I have posted a list of additions on whitacregreek.com, along with revisions and updates.

The fact that this book began as part of a beginning method accounts for the inclusion of very basic material that is not always found in such grammars. The book is also marked at times by more extensive explanations than usual, occasional notes regarding what one should learn at the outset and what can be left for later, as well as the repetition of some explanations in more than one place in the book. My original title was A Student’s Grammar of Koine Greek, to highlight this pedagogical focus of the book.

A helpful feature of the book for exegesis courses is the inclusion not only of most of the syntactical details encountered in passages but also coverage of Greek morphology. The book presents twelve core patterns that cover the vast majority of the forms met in most texts. Some of these patterns are actual paradigms, for example the paradigms for εἰμί, and others are the building blocks of paradigms. These twelve core patterns fit on one piece of paper, yet once students memorize them and learn how to apply them, they will be able to recognize most forms. [A copy of the twelve core patterns is available on whitacregreek.com.]

The book presents twelve core patterns that cover the vast majority of the forms met in most texts.

Regarding the controversial topics of verbal aspect and Aktionsart, I generally follow the approach represented, for example, by Buist Fanning in Verbal Aspect in New Testament Greek (Oxford, 1990) and the articles in The Greek Verb Revisited, edited by Steven E. Runge and Christopher J. Fresch (Lexham Press, 2016).

On another controversial topic, Greek voice, I have found particularly helpful the approach represented by Rutger Allan, The Middle Voice in Ancient Greek (Brill, 2003), among others. Accordingly, I provide an introduction to the view that verbal voice in ancient Greek consisted of active and middle, with the passive understood within the spectrum of uses of the middle. This approach has also affected how I have labeled and organized the morphological patterns. In particular, in the future and aorist paradigms I have adopted the fairly recent proposal to view the forms with θη/η as second middle/passives instead of passives. 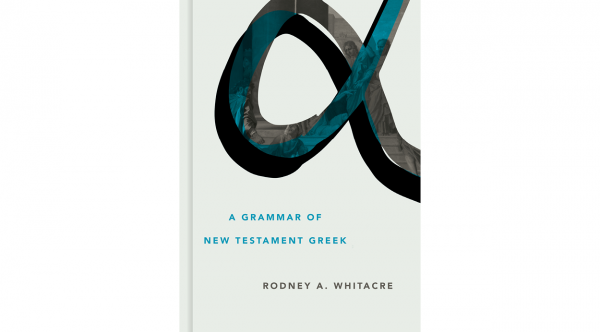 Finally, an unusual feature of the book is the inclusion of a brief introduction to etymology and word formation. These topics are not always included in basic or intermediate grammars, perhaps in part because they are seldom needed for exegesis. When etymology is mentioned the stress seems to be on its danger. Such warnings are needed, but it is fairly easy to avoid misusing etymology. As long as a person understands such misuse, there is no harm and much benefit and enjoyment in paying attention at times to the etymology and formation of words.

Thus this grammar reflects my concern that students be prepared for both exegetical analysis of a text and also for simply reading a text comfortably, picking up the meaning in the order it comes in the Greek, and delighting in the beauty of the language. Every student is capable of such fluency at least for the passages they have studied. Perhaps if more students had such an experience they would be less apt to let their Greek atrophy.

Meet This Book: A Grammar of New Testament Greek