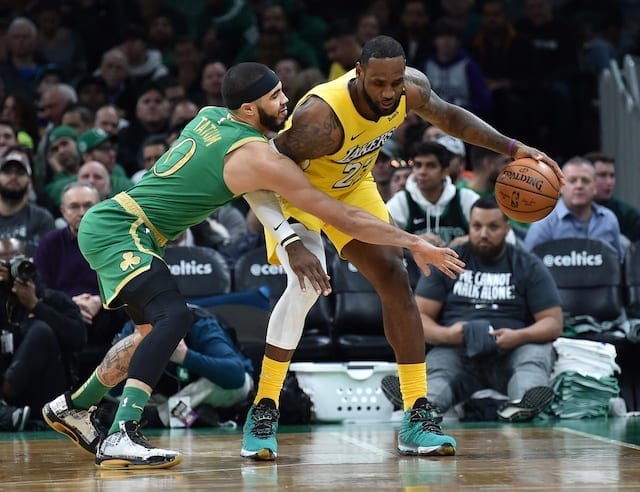 Metta Sandiford-Artest experienced the great NBA rivalry between the Los Angeles Lakers and the Boston Celtics first hand. At the time named Metta World Peace, he helped memorably L.A. defeat their archenemies in the 2010 NBA Finals.

The two franchises never came close to the same level of competitiveness over the last decade. Even though Boston bounced back first, they are yet to reach the pinnacle again, losing in the Eastern Conference Finals four times along the way.

Meanwhile, the Lakers registered arguably the worst decade in the organization’s history, failing to even reach the playoffs for seven consecutive seasons after their first-round exit in 2013. The tides started turning when Jeanie Buss assumed controlling ownership and steered the franchise toward the dawn of the LeBron James era.

But even after both teams turned things around, Sandiford-Artest thinks the rivalry between L.A. and Boston is not as heated as he remembers it to be. “[Because] in 2010 you had Pierce and Garnett and Ray Allen, right?” he explained in an exclusive interview with LakersNation.com.

The Celtics undeniably are a young, talented team led by Jayson Tatum and Jaylen Brown, who already are considered superstars and have the potential to become players of an MVP-caliber. But Sandiford-Artest thinks they are yet to prove there are legitimate heirs to Boston’s legends while L.A. already found the franchise’s next Kobe Bryant and Pau Gasol.

Before Sandiford-Artest triumphed over the Celtics alongside Bryant and Gasol in 2010, he watched L.A. suffer a heartbreaking loss in the same NBA Finals matchup at TD Garden two years earlier.

After the game, the forward headed to the Lakers’ locker room and chatted with Lamar Odom and Bryant — and rumors had it he did that to show his intentions of joining L.A.

But Sandiford-Artest explained he attended the game because he had never been to the Finals himself and spoke with Bryant only to appreciate his hard work.

“I just wanted to congratulate him because I’m a fan and he worked so hard,” he said. “And that was it. I never said I want to play with you or we’re going to get the Celtics. I didn’t say that. I’m way too competitive for that.”