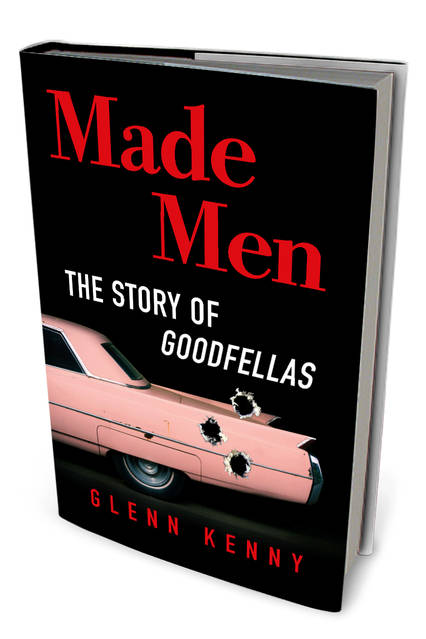 What keeps authors awake at night

Writing a book and having it published by a prominent house is a generally pleasant experience, to put it mildly. Having your book get a warm reception from reviewers and readers, which my book Made Men: The Story of Goodfellas mostly has, is also nice. Selling well is…well I don’t want to repeat myself. My first Author’s Statement comes in January and since my editor has already told me that the book “exceeded expectations” I’m looking forward to good news, but I don’t want to get ahead of myself.

The downside of this multi-level experience is knowing where you screwed up and temporarily having limited means to do anything about it. A few errors made it into the first printings of Made Men; they all ought to be fixed by now, as we go into (I think) a third printing. But having made them  in the first place stings, especially when I think of the people involved in the movie, who’ll be reading, and who’ll spot them, and whose confidence in me as a chronicler of their work will be at least slightly undermined. (And yes, I do appreciate how they let down the lay reader as well.)

How do these things happen? Actually, it’s too easy. Mostly through a combination of simple human  error coupled with over-confidence. And what you come up with after you’ve read something over and over again, and are kind of semi-automatically going back to the text for what you think is a thorough tidying up, when in fact what you’re actually doing is a robotic (as in mechanical, not as in laser-focused) pantomime of proof-reading. Your eyes see, but you don’t think through what you’re seeing. An error that’s been in place for some time starts to register as “right’ just because you’ve scanned it so many times and come to accept it as a reality.

One of the Made Men reviewers on Amazon slammed me for two errors that they found early in the book: my misidentifying The King of Comedy as a 1984 film when in fact it was released in 1982, and my placing “Smooth Criminal” on Michael Jackson’s Thriller album as opposed to his Bad album, on which it actually appears, and whose title track was made into a video by Martin Scorsese from a Richard Price story and script. This was a bit of a “gotcha” moment for me, in the privacy of my imagination at least, because it tipped me off that the reviewer was basing his slam on the bound uncorrected galley proofs, which are announced in a circle on the front cover as uncorrected galley proofs for a reason — they’re not corrected. So this guy had definitely not made an “Authorized Amazon Purchase,” phooey [author mimes spitting at the floor]. Because for the final version, the release year of King of Comedy was changed to the correct one. Except, uh-oh, the Thriller error remained intact.

Later on in the book, writing about movies with pop song soundtracks, I compare Mean Streets and American Graffiti and glibly state “While both acknowledged as classics today, neither Mean Streets nor American Graffiti were box-office blockbusters.” While Graffiti was a little slow out of the gate — it became what used to be called a “sleeper hit,” something that the subsequent mutations of the film exhibition industry made a practical near-impossibility — it of course was a box-office blockbuster, the third highest-grossing film of the year. You like to think that you check every factual assertion you make, but you don’t. That’s why fact-checkers were invented. But fact-checkers are thin on the ground these days. I’m not making excuses. The point is, the “facts” you don’t check, because you think you know, will bite you on the ass every time.

People like to bat around that F. Scott Fitzgerald observation (did he even really say this? I’m not so certain anymore, and who can really state with certainty that he did?) that “the test of a first-rate intelligence is the ability to hold two opposing ideas in mind at the same time and still retain the ability to function.” As it happens, then, maybe having a “first-rate intelligence” has more in common with being an idiot than was heretofore believed. Because, you know, here I am, writing about Scorsese’s video for “Bad,” writing about Joe Pesci’s appearance in the Michael Jackson film Moonwalker, which is largely tied in with Bad, and I’m nevertheless identifying “Smooth Criminal” as having appeared on Thriller. And later on, there I am talking about how American Graffiti was sufficiently popular to inspire the sitcom Happy Days, and then I state it wasn’t a box-office blockbuster.

These goofs have been fixed, but it’s embarrassing to have them in a first edition, and those are not the only ones. At one point I cite the girl-group The Ronettes when I mean the girl-group The Crystals. I misspell “Bufalino” as “Buffalino.” For a little while after the book went into hardcover all I could see were the errors, and I started to hate the book. I had to pull myself back to something I told myself after I submitted the manuscript, which was that absolute perfection was an unlikely outcome. I still would have liked to come a lot closer to that than I did with the first printing.

Oh, and there’s another side to this: what did not make it in. I recently got an e-mail from a reader who was rather perturbed that I did not cite the obvious antecedent to Goodfellas’ “meet the gang” Steadicam shot, that is, a similar characters-address-the-camera bit in Federico Fellini’s I Vitelloni. The thing is, I had. In my manuscript of the book’s fourth chapter, a scene-by-scene breakdown of the movie (a favorite with some readers, a source of “I already know what happens in the movie” complaint for some others), I wrote this:

Liotta’s voiceover accompanies an elaborate tracking shot.  The inspiration here is the opening (post credits) shot of Federico Fellini’s 1953 I Vitelloni, which moves across a boardwalk restaurant and introduces three of its main characters, in less than a minute. But Scorsese goes bigger than Fellini, giving us 10 characters in less time,  in a Steadicam shot that goes on for a little more than 60 seconds.

In the finished book, the passage goes “Liotta’s voice accompanies an involved Steadicam shot. There’s an overtly theatrical feel somehow…” etc. That sentence about the theatrical feel kicks off a new paragraph in the manuscript featuring the citation of the Fellini film. I’ve gone over the notes and drafts and PDFs of various versions and I still can’t suss out how the passage got dropped. It should be restored some time in the future.

What have we learned here? As I embark on a new book, I’ve made some new rules for myself that I’m not going to mention here because that sort of revelations tends to solicit reactions such as “you mean you DIDN’T do [X]?” and or solicit suggestions as to what I ought to do, which I think should be confined to my immediate circle of project collaborators, no offense. Mainly I have a new appreciation of something I thought I already knew, which has to do with how you can never be too careful, and what you owe to the reader. I have been told many times over by readers how much they enjoyed the book and how much they got out of it, so I know to some extent in the larger scheme of things they haven’t been let down. But I also know that I can’t snicker at another author writing that Max von Sydow played the role of Death in The Seventh Seal as vigorously as I once might have.

What keeps authors awake at night