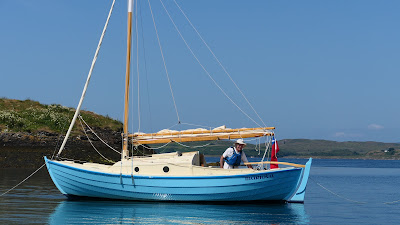 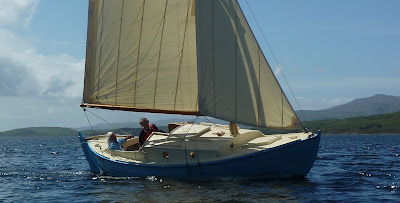 This Summer has been good for getting to know the Mariota and discovering the extent to which age has diminished my ability to move about the deck on a small boat with confidence since I was last regularly sailing aboard Juni in 2016. Actually building a boat for two and a half years followed by going for government walks during the lockdowns has kept me reasonably fit.
When we launched in 2019 I was quite nervous, but more about me than the boat. It’s well known that amateur builders always overbuild and I always remember that advice from one of the ancients that the time to worry about whether or not you used enough glue is not when you’re two miles offshore and it’s blowing a hoolie. Yes, the boat was strong enough, but I had become a bit chicken ashore, not helped by there being very little sailing last year.
The 2021 Season has started rather well and I’m liking the Kotik design more, the more I venture out. The basic hull shape is extremely sea-kindly, but being beamy and shallow she should be sailed flat, the total opposite of the Stroma, with a tonne and a half of lead beneath her. I've rigged up lots of string and can easily take in a reef in about five minutes without venturing on deck. Sailing on my own in Force 3 is very comfortable with one reef, a good, easily controllable spread. The expression for reefing in Gaelic, by the way, is “cuir ceann a steach”, bring the head in! And white horses are eich bhana! (eech vana)
Last month my new mate the Professor and I went to a socially distanced meet up on an uninhabited island, where a group of suitably eccentric friends came together for the first time in ages. On the Saturday there was a pretty strong breeze from the South west, probably verging on a Force 4, which is a lot for wee boats. Most of us decided to go, as we operate on the flock principle, with the fastest boats herding the others and looking after each other. With two reefs down Mariota felt very safe and steady. 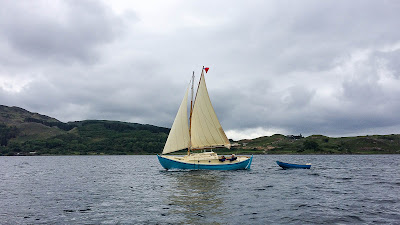 When the Tollesbury wizard was making the sails he announced that he was adding a third reef, as he was sure it would come in handy one day. While I hope not to need it, I’m very pleased that it’s there. I’ve also asked for a storm jib, which will be tacked down a little aft of the roller and hoisted on a separate halliard.
On the Sunday we sailed round to the Castle of the Dogs on Torsa for a picnic, “Caisteal nan Coin” since you ask. Read more about that here: A Voyage Round Torsa
Then the heatwaves started and there have been some lovely days afloat in gentle breezes, most recently down to Eilean na Gamhna, the Island of the Stirks, where the pals took some lovely photos. 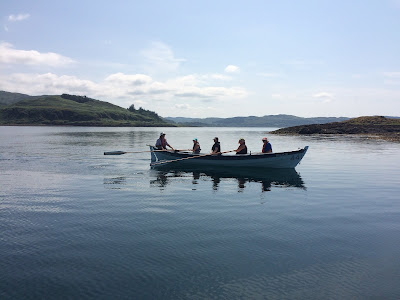 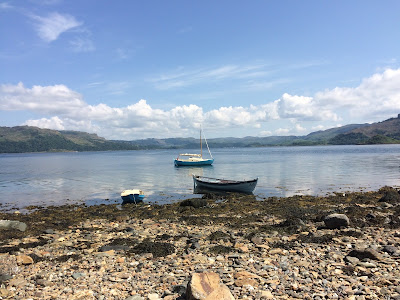 The Selkie is of course another of Iain Oughtred’s designs, the community skiff from the Isle of Seil, which I helped to build. My wee tender, the Peigi, is a Nutshell from the board of Joel White. My first build, from 1986. Meeting up with the fellow Selkies was a real bonus, with cuirm -chnuic air an traigh (picnic on the beach. My friend James Fenton took these shots. 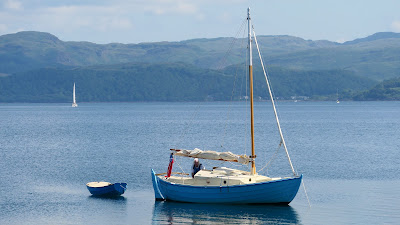 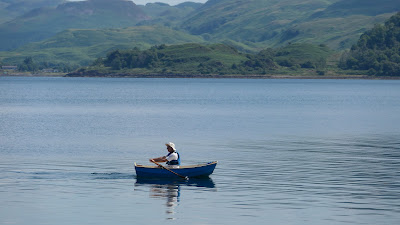 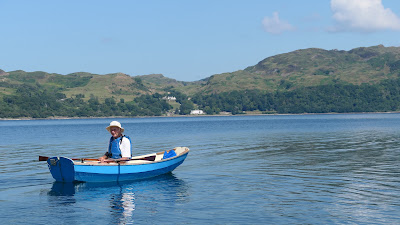 Anchored in our favourite spot and there was a huge dod of mud on it when it came up. Cue to use the canvas bucket, that Wilson Thom’s widow gave me thirty years ago when she decided to give up driving and had to clear her garage. 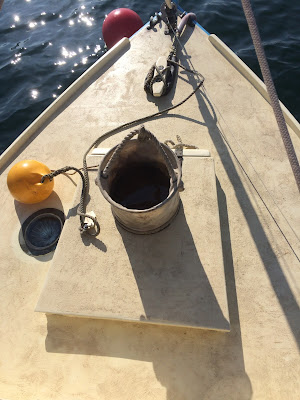 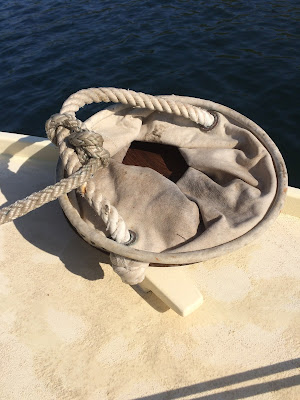 Wilson was one of Willie Russell’s crew in the Seawanhaka Cup races in the 1930s and taught me a lot about sailing nuair a bha mi og . A competitive fellow who exhorted me to overtake when I was learning to drive, shouting “justifiable risk”. 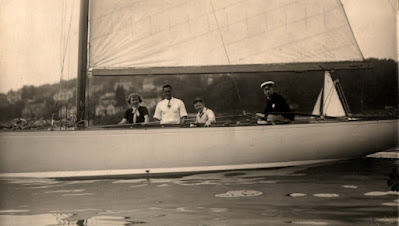 So the bucket could be any age. The great thing is that it doesn’t chip the paintwork, as a metal one would, and of course plastic ones just detach from the handle when full of water and add to marine pollution. Folds away to nothing and back under stern deck until the next time.
Top Image courtesy Richard Pierce aka the Luing Guru
Source: scottishboating