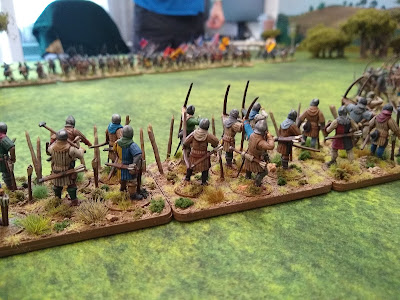 It's back to back gaming at Scrivsland, following on from the American Civil War action on Saturday we played a Hundred Years War battle on Sunday using my collection with the Midgard rules that James is currently playtesting and will hopefully be published soon.

Paul and I commanded the English, led by Henry V (L4), the Duke of York (L2), Baron Camoys (L1) and Sir Thomas Erpingham (L1), the English troops were four units of foot men at arms and six units of bowmen.

We would be trying out some stakes rules for bowmen for the first time.

The English deployed quite far back with a centre of men at arms supported on each side by archers, a detachment of archers and men at arms was deployed on our right to counter any French attacks around the woods there.

The French concentrated their main body in the centre, and as expected two units of Gendarmes were positioned attempting to exploit around those woods. 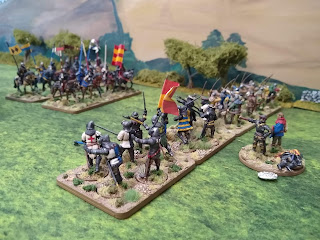 The initial French attacks fell on that flank, supported by the stout bowmen emplaced behind their stakes, the Duke of York fended off the attacks although many Englishmen fell, both units remained in the fray.
The General French attack in the front and centre now fell like a hammer blow. 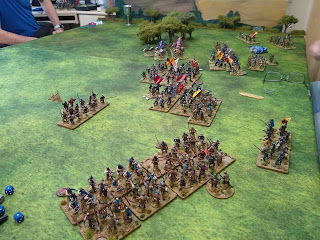 Unfortunately the hammer had been badly forged! Units of French men at arms struggled to make headway against the English bowmen, combats that on paper were foregone conclusions saw English bowmen not only hold the line against the French foot knights, but in some places also drive them off. 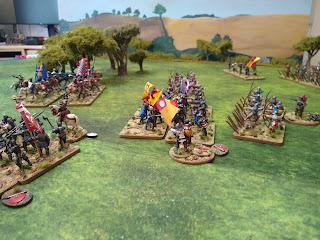 The only headway that the French were making was on the left flank, where their levy spearmen and mercenary crossbowmen were driving back the English archers, the French mounted and foot men at arms could only look on in anguish as the commoners fared better. 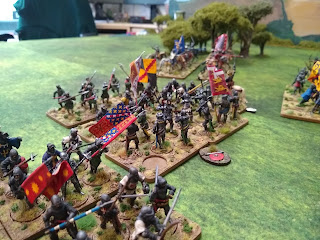 Seizing the opportunity Henry committed his men at arms to the battle to engage their French opposite numbers. 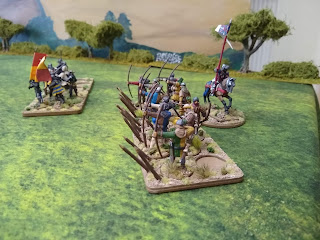 The French morale collapsed and the English were victorious! Not a single English unit had been eliminated.
The Constable of France along with the Count of Eu and Count of Vendôme had been captured for lucrative ransoms.
More shots of the action. 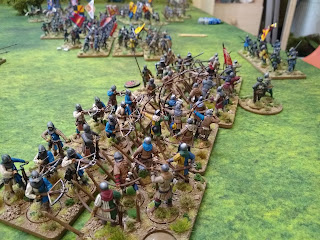 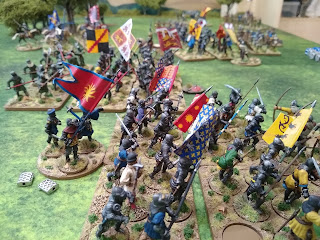 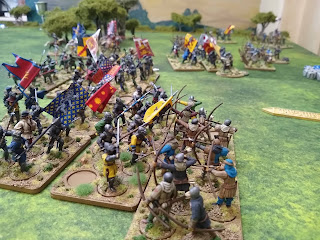 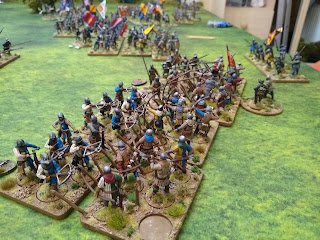 A great game in great company.