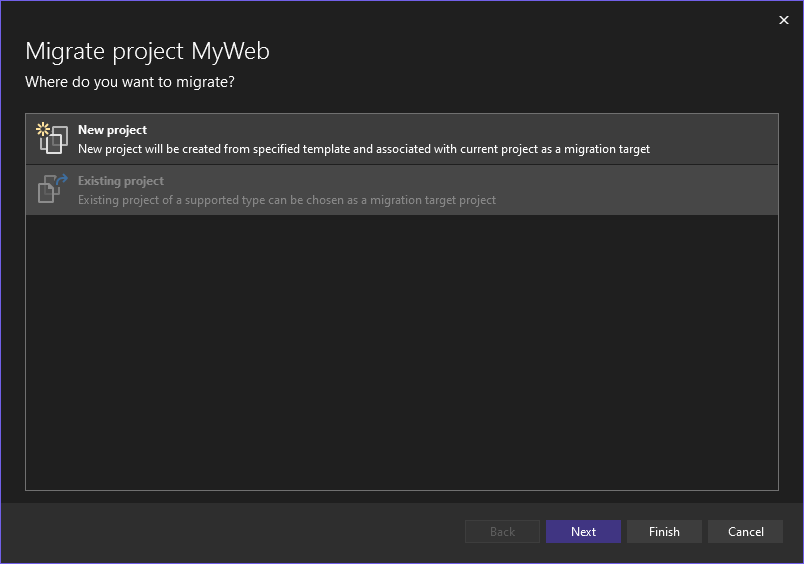 ASP.NET Core is a unified and modern web framework for .NET. Migrating existing ASP.NET apps to ASP.NET Core has many advantages, including better performance, cross-platform support (Windows, macOS, Linux), and access to all the latest improvements to the modern .NET web platform. But migrating from ASP.NET to ASP.NET Core can be very challenging and time consuming due to the many differences between the two frameworks. That’s why we’ve been working to provide libraries and tooling for performing incremental migrations from ASP.NET to ASP.NET Core so that you can slowly migrate existing ASP.NET apps a piece at a time while still enabling ongoing app development. We’ve been working on tooling in Visual Studio to simplify the migration experience, and a new update to the incremental ASP.NET migration tooling is now available.

In this series we’ve previously posted the following posts related to project migrations:

We’ve made the following improvements to the incremental migration tooling:

We’ll expand on each of these topics under the headings below.

Incrementally migrating class library projects enables you to migrate to the latest .NET versions in manageable steps. In addition, when you migrate items from an ASP.NET project that depends on code in a class library, the extension can determine those dependencies and migrate them as needed. With this approach the original .NET Framework project is not modified and can still be referenced by other projects.

In this release we’ve made several user experience (UX) improvements to the incremental migration tooling. We’ll briefly go over the significant updates here.

We improved the dialog for selecting whether to create a new migration project or use an existing one. You can see the improved dialog in the following image:

In previous releases the selection for a New Project or Existing Project was a radio button. We have also significantly updated the Summary page which appears after you migrate items. The updated dialog is shown next. 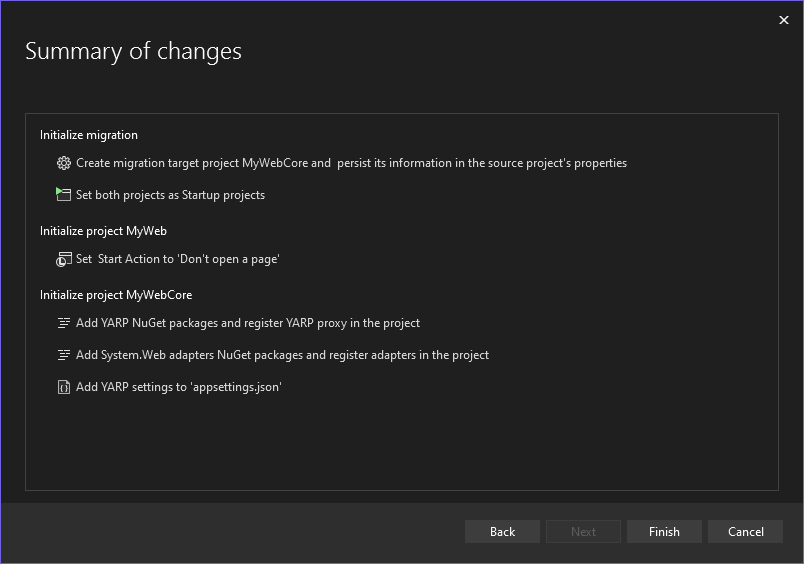 We feel that with the updates to this page, its much clearer what actions have taken place as well as being easier to read. We’ve also made several smaller UX improvements that you may notice as you use the new version of this extension.

This extension is still in the early stages, so you may run into some issues. Here are the significant known issues that exist in the current version of the extension.

This is not a complete list of known issues, but these are the most important ones that we’ve identified.

Please give this new extension a try and please provide feedback so that we can improve this feature as we proceed.

To upgrade to the latest version:

This release adds adapters for a few more APIs from HttpContext, HttpRuntime, and others that should help with migrating code that relies on these types.

Beyond these changes, the main change to the APIs is that the builders used to construct the services have been separated for ASP.NET Core vs Framework. This results in changes to what packages you use where and how you register services.

For example, in ASP.NET Core you now register services for the System.Web adapters as follows:

These registrations allow you to build up the services that you need for your migration process. This process is often a slow one that allows you to move functionality from your ASP.NET Framework application to the ASP.NET Core application. Please see the previous blog posts and the documentation for the project to see features that these libraries enable.

This release brings in a number of API changes. Some of them are:

For the full changelog, please see the release on GitHub.

We want to hear from you how we can best improve the incremental ASP.NET migration experience. The best place to share your feedback with us is on GitHub in the dotnet/systemweb-adapters repo. Use the

reaction to indicate features or improvements that are most important to you.

This is a brief overview of this new extension and the System.Web adapters for ASP.NET Core. For more details you can check out the additional related resources listed below. Please try it out on your existing ASP.NET projects and share feedback so that we can continue to improve the incremental ASP.NET migration experience.

Thanks, and happy coding!