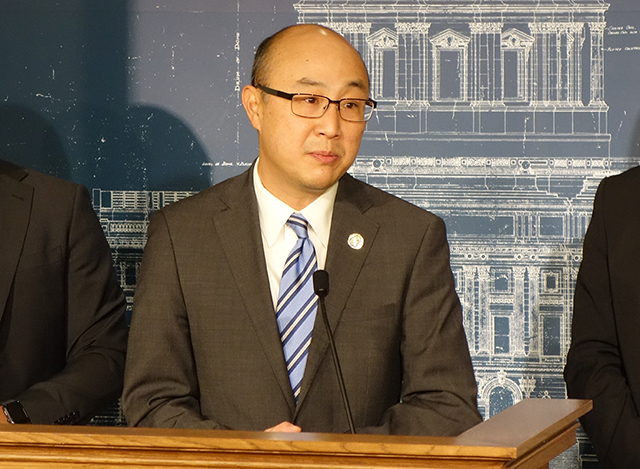 As Minnesota Republicans lay out their plans to reduce crime in the upcoming legislative session, legislators from the party have set out to change the policy of elected officials from outside the Capitol: County prosecutors.

The GOP this year has particularly criticized Hennepin County Attorney Mike Freeman and Ramsey County Attorney John Choi for policies they view as too soft on crime, such as Choi declining to prosecute felony cases that stem from traffic stops for certain violations like expired tabs.

Lawmakers are not alone in their frustration. Some police groups and suburban Twin Cities mayors have also said they aren’t happy with the two prosecutors amid a wave in violent crime, such as carjackings, murder, robbery and auto theft.

Republicans, as well as police associations, have announced a slate of legislation they hope will limit the discretion of prosecutors and create more transparency in when and where they charge cases.

Meanwhile, Choi and Freeman say the concerns with some of their policies and decisions are overblown, misunderstood, or have more police support than Republicans are letting on — even as they concede there might be some cause for common ground among county attorneys, cops and the GOP.

What do Republicans and police want to change?

The GOP has bristled this year at many public safety officials, including judges and appointees of Gov. Tim Walz on Minnesota’s Sentencing Guidelines Commission. But a lot of the party’s ire has been trained on Freeman and Choi.

Republicans — and others like police groups and suburban mayors — have said the pair aren’t prosecuting enough people, or are implementing other changes that result in less incarceration. For instance, in addition to Choi’s traffic stop policy, he has stopped prosecuting fifth-degree drug possession cases, which are a low-level felony, in order to focus his office’s resources on violent crime.

On Jan. 4, a group of suburban mayors sent a letter to Freeman criticizing his policy not to request bail for some charges, such as low-level drug possession, damage to property, identity theft and motor vehicle theft, regardless of criminal history. The letter says there has been a lack of involvement or partnership with Freeman’s office to address the rise in crime. The county needs “to reconsider failed criminal justice reforms,” the letter says.

“There is a sense of lawlessness and lack of accountability that is stemming from criminals who commit crimes and then are being turned back to the street in short order — with little or no consequence — and that conduct is repeated,” the letter says.

The Hennepin County Police County Association of Police Chiefs also said in an early January letter to Freeman that officers and investigators “very consistently” arrest people who don’t get charged for potential crimes, many times involving guns or drugs, though no specific examples were offered by the association.

A Senate GOP spokeswoman also cited a Ramsey County prosecutor who quit after saying the office has gone too far in aiming to keep offenders out of jail.

In response, state Sen. Warren Limmer, a Maple Grove Republican who chairs the Senate’s Judiciary and Public Safety Finance and Policy Committee, told reporters on Wednesday that his party wants to set a “hard mandatory minimum sentence for violent crimes,” mostly those committed with firearms.

He said if probable cause of a crime exists, prosecutors “must move forward with prosecution and may not pick and choose which crimes to change, or exclude entire classes of criminal statute as some are doing right now.”

“The highest priority of any government is the safety of its citizens,” Limmer said. “The actions of a few prosecutors are destroying that mission.”

GOP lawmakers, who hold a majority in the Minnesota Senate, haven’t released the bills they hope to pass in the legislative session that begins Monday, but they have described many of them in recent press conferences.

Earlier in the month, Limmer said decisions by prosecutors not to follow state laws also hurts police morale and recruiting, and targeted Freeman for not prosecuting “his definition of low-level of crime.”

“There is something seriously going wrong in our state and in Hennepin County,” Limmer said. “We’ve even begun to ask questions, ‘well if they’re going to cut back on 50 percent of their prosecutions, do they need as big a budget as they claim they have now.”

In a separate press conference, which included leaders from several police associations, Sen. Paul Gazelka, an East Gull Lake Republican running for governor, also outlined a plan for legislation to toughen minimum sentences for carjacking and enforce minimum sentences for committing crimes with firearms he said are being waived by some judges and prosecutors.

Gazelka said Minnesota has a relatively low rate of incarceration compared to other states, and said he wants a tougher stance on penalties for youth.

The Minnesota Chiefs of Police Association supports legislation that would require county attorneys to give data to the Legislature about felony-level offenses that aren’t charged.

In order to become law, these proposals would need to clear the Minnesota House, which has a DFL majority, and be signed by Walz. DFLers have previewed some of their own legislation aimed at reducing violent crime over the last few weeks, but the legislation hasn’t centered on the discretion of prosecutors.

State Rep. Cedrick Frazier, a New Hope Democrat and vice chairman of the House’s Public Safety and Criminal Justice Committee, said crime is up in places with a more punitive approach and more progressive approaches to crime. Blaming prosecutors is simplistic, he said.

Prevention, not prosecution focus of the DFL

On Monday, House Democrats released a $100 million public safety spending plan, which includes $40 million for community groups like nonprofits that aim to prevent crime, another $22 million for community policing initiatives aimed at helping police become closer to the people they serve and another $22 million meant to improve criminal investigations.

House Speaker Melissa Hortman, a DFLer from Brooklyn Park, described the Republican agenda as trying to “defund” prosecutors in Hennepin and Ramsey counties — an allusion to the defund the police mantra of some progressives that has been criticized by GOPers and many Democrats.

House Majority Leader Ryan Winkler, a Golden Valley Democrat running for Hennepin County Attorney in 2022, said hundreds of attorneys in Hennepin and Ramsey counties are prosecuting cases each day and have stacked workloads that are overwhelming resources. He called for more money for prosecutors and public defenders.

“I don’t think we are looking at a question of prosecutors declining to prosecute cases, especially violent crime or crime with repeat offenders,” Winkler said.

What Freeman and Choi say

Any criticism of his work, Choi said, or the work of his office, an outfit he has led since 2011, is something he takes seriously.

When complaints or suggestions do reach his ear, Choi said he approaches each with a sense of “humility.”

Choi said he strives to be as transparent as possible and is happy to discuss any recommendation for his office. But he also feels that Republicans at the Legislature have not offered enough details about what they think he’s doing wrong.

As for the traffic stop policy, Choi said he has noticed that it has perturbed some, but said he does not see why.

“It is a very narrow entry point into my policy,” Choi said of the one traffic stop initiative. “I’m just talking about six equipment violations that I don’t think have any relation to public safety. So I’d like to know what other policy people are talking about. We still have the same gun policy we’ve had since 1995.”

Choi noted police chiefs, like St. Paul’s Todd Axtell, have supported the initiatives tied to low-level drug cases and traffic stop violations because they afford short-handed departments extra energy to focus on more pressing matters. When he announced the policy in September, Choi also said low-level traffic stops have a disproportionate impact on people of color.

The notion that the Ramsey County Attorney’s Office is lenient on violent offenders is simply not true, Choi said.

Though there are diversion programs for adults and juveniles, those are only offered to those who do not commit a violent crime. There might be a violent criminal who is diverted to a treatment court for addiction, Choi said, but that option is highly structured by a judge who oversees the entire process.

Choi said he has also heard complaints about a “revolving door” in which criminals are arrested and then set free by a passive prosecutor. There are complicating factors to this, Choi said.

Another issue involves rules regarding when police can detain a minor, which changed in 2005. Before then, police detained many more minors, averaging about 130 juveniles at the Ramsey County detention center. Then came calls to limit police detaining a minor who has been accused of a crime but has not been convicted of a crime – reform that was backed by police chiefs at the time, noted Choi.

A prosecutor can also only charge someone based on evidence provided by police. If there is not enough evidence, then that prosecutor cannot file charges. In 2021, for example, there were 100 reports of carjackings in St. Paul, Choi said.

“Out of those 100 cases, only 28 were submitted to our office to do something on,” Choi said.

Even when presented with information from police, it sometimes isn’t enough to justify a criminal charge.

“My approach is to work with police to increase the clearance rate of cases,” Choi said.

Choi said he doesn’t want his office to be one that “rubber stamps” charges on every case presented by police. He also added that he understands what long prison sentences can do to an individual, their family and community — and that convictions and long sentences are handed to Black people and people of color more readily than white suspects.

“From the perspective of thinking about who needs to enter the criminal justice system and who actually gets sent to prison, we have to be really thoughtful about all of that,” Choi said. “We shouldn’t just be trying to incarcerate everyone we can, and it’s not the role of the prosecutor to convince everyone we can.”

Choi said he also wants to work with anyone who really wants to improve county prosecution. The request from a group of police chiefs that prosecutors document each time they chose not to prosecute a case and provide reasons for not filing a criminal charge, Choi said, sounds like a good idea.

Longtime Hennepin County attorney Freeman has also come under fire from GOP lawmakers. Although he referred to most of it as “noise,” Freeman did pick up on one suggestion that he thought to be worthwhile — Gazelka’s plan for stricter punishments for carjackers.

“I think that deserves to be discussed,” Freeman said. “But looking at the cases that John Choi or I charge, the cases we turn down from the cops are the cases when there is insufficient evidence.”

Freeman, who is not seeking reelection, said his brand of prosecution has been largely consistent over his 20-plus years at the helm, but lately, with more experience, has become more focused. That includes policy choices like forgoing prosecution against anyone with less than 100 grams of marijuana, and ongoing initiatives like his HEALS 2.0 campaign, which aims to create a web of community support to prop up juveniles who come from tough circumstances and commit a non-violent property crime.

Like Choi, Freeman said he does not show the same leniency to those, adults or juveniles, who commit violent crime.

“I’ll match our record on prosecuting serious felonies with anyone,” Freeman said. “We’ve just in the last three months prosecuted first degree murders and second degree intentional murders; we’ve got people doing life without parole, we’ve got people doing anywhere from a 160 to 330 months. In the 11 or 12 second degree homicides, we’ve either gotten pleas or guilty verdicts. That’s a heck of a track record and we are absolutely swamped with cases.”