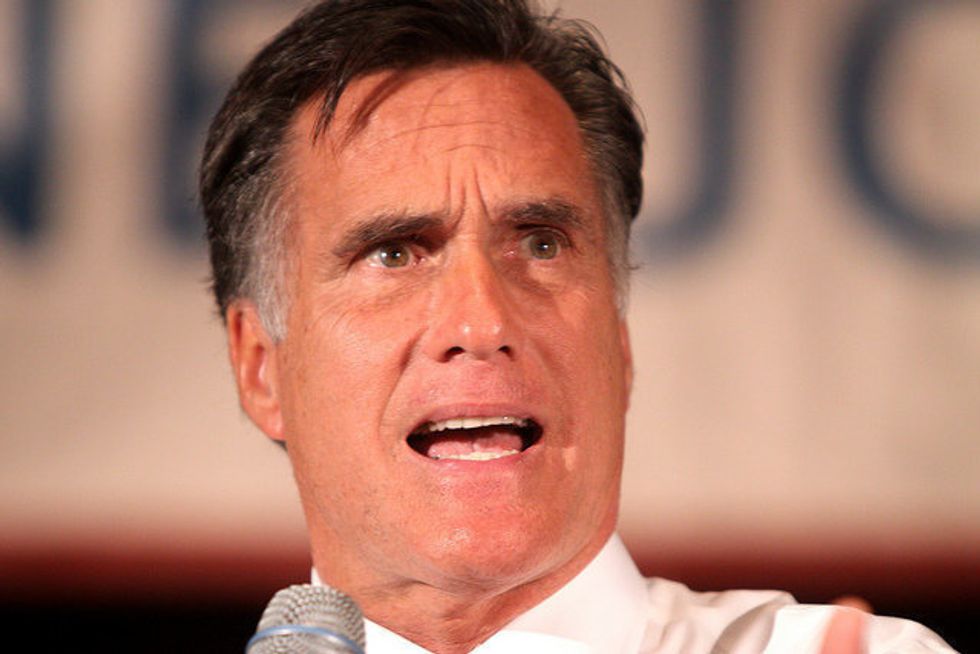 Mitt Romney Paid For College By Selling Off A Few Stocks, So Why Don't You? 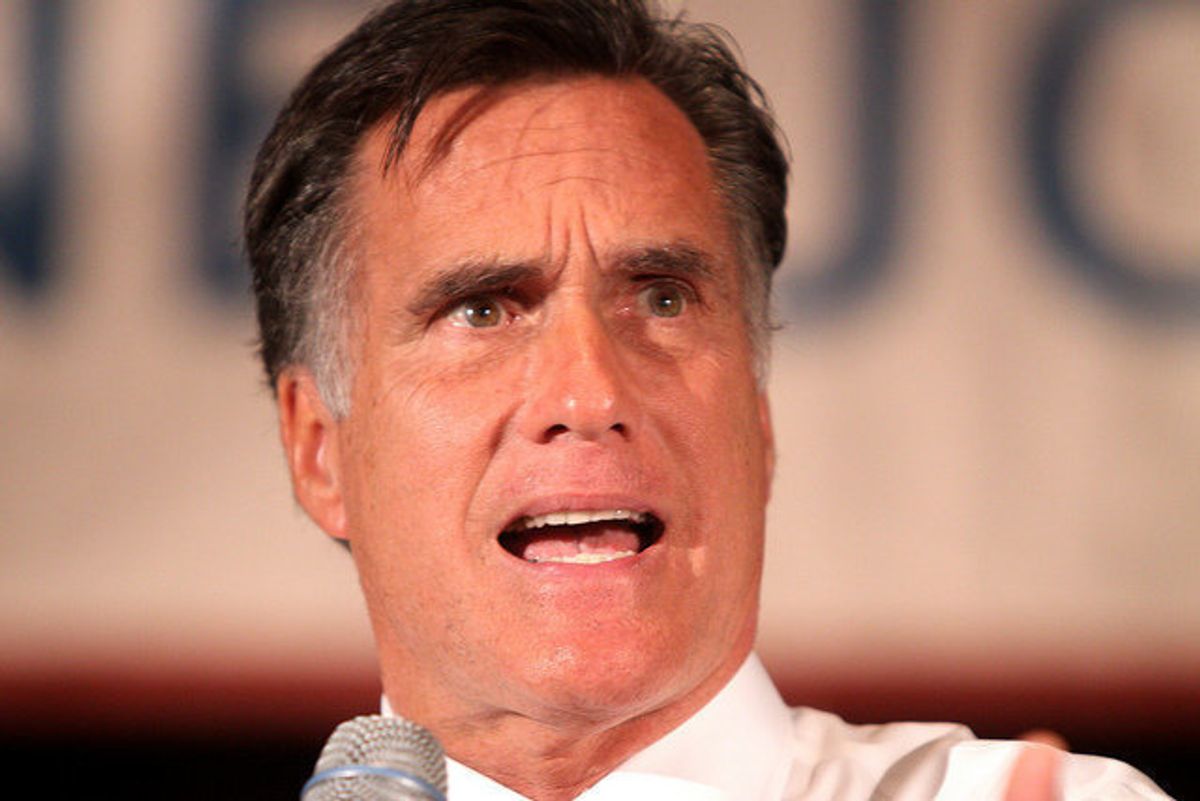 President Joe Biden signaled earlier this week that he may finally go ahead and forgive student loan debt for tens of millions of Americans, in addition to once more extending the pandemic moratorium on student loan payments (and interest) through August. The details are still not worked out, but Press Secretary Jen Psaki said at Monday's daily briefing that Biden would "make a decision about any cancellation of student debt before the conclusion of that pause on student loans.”

Well by golly, Senator Willard Mittens J. Car Elevator McRichguy Romney took to Twitter to condemn Biden's potential student loan forgiveness, pointing out it could only be a cynical election-year cash giveaway to people who don't deserve it.

Desperate polls call for desperate measures: Dems consider forgiving trillions in student loans. Other bribe suggestions: Forgive auto loans? Forgive credit card debt? Forgive mortgages? And put a wealth tax on the super-rich to pay for it all. What could possibly go wrong?

As anyone knows, cynical cash giveaways to political supporters are meant to result in massive tax cuts for the rich, not debt relief for millions of Americans. Don't forget, the hot new Republican plan this year is to raise taxes on low-income folks.

Besides, Mitt Romney knows how people should pay for college. The could follow his example, as Ann Romney lovingly recalled in a 1994 Boston Globe interview, which people very ungraciously kept bringing up when ordinary guy Mitt was running for president in 2012.

Recalling her early years with Mitt, when they were young and having to scrape by, Ann remembered how they scrimped and saved, like any young married college couple in Utah in 1969:

They were not easy years. You have to understand, I was raised in a lovely neighborhood, as was Mitt, and at BYU, we moved into a $62-a-month basement apartment with a cement floor and lived there two years as students with no income. It was tiny. And I didn’t have money to carpet the floor. But you can get remnants, samples, so I glued them together, all different colors. It looked awful, but it was carpeting.

But by golly, they had each other, and they had their carpet samples, and they had love. It was a little bit like those idealistic bohemian dreamers in Rent, but without the Broadway production values or the AIDS.

Oh, and they had a little something else:

We were happy, studying hard. Neither one of us had a job, because Mitt had enough of an investment from stock that we could sell off a little at a time.

Oh, yes, the stocks were probably some help, come to think of it. She went on to explain that

The stock came from Mitt’s father. When he took over American Motors, the stock was worth nothing. But he invested Mitt’s birthday money year to year—it wasn’t much, a few thousand, but he put it into American Motors because he believed in himself. Five years later, stock that had been $6 a share was $96 and Mitt cashed it so we could live and pay for education.

Somehow, they scraped by — you don't even want to think about the cost of carpet remnants these days! — and eventually Mitt, entirely through his own hard work and grit, managed to become America's richest senator today, with a net worth of about $450 million. So you can see why he doesn't see why anyone should have their student debts forgiven. Couldn't they just sell off a little of the stock their dads gave them?

In conclusion, Mitt Romney truly is a man of the people, as long as you remember that corporations are people, my friend.

And that's all we have for you today in terms of Rich People Talking Out They Asses About Student Debt ... or it was, until we saw this tweet from Fox News anchor Laura Ingraham (net worth a mere $40 million), who wants you freeloaders to make your moms work as waitresses to pay off your student loans. 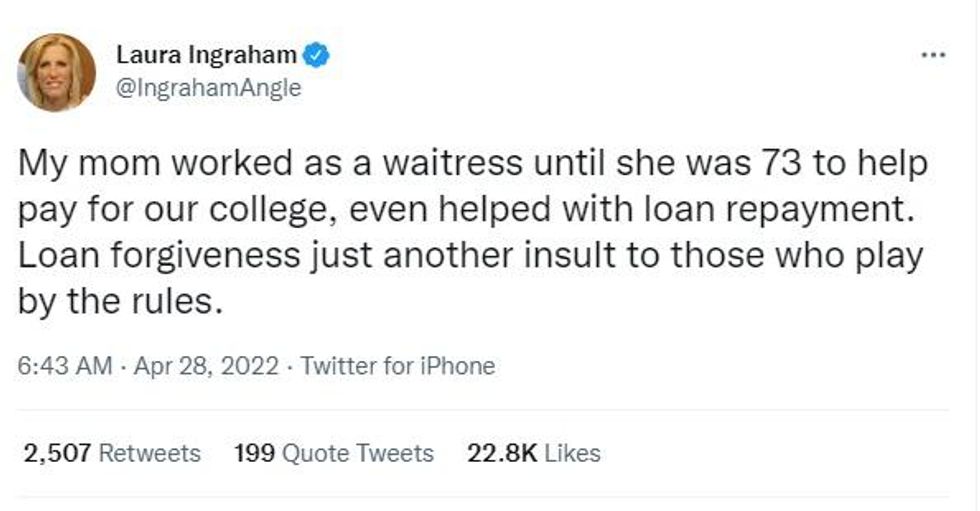 My mom worked as a waitress until she was 73 to help pay for our college, even helped with loan repayment. Loan forgiveness just another insult to those who play by the rules.

Also, I never should have benefited from being vaccinated and boosted when I caught COVID-19, or from the antiviral treatment that also may have helped me stay out of the hospital, because isn't that an insult to all the people who died before those options became available?

Yr Wonkette is funded entirely by reader donations, my friends. If you can, please give $5 or $10 a month, and we won't even ask you to cash out any of your birthday-gift stocks to do it. Like, you can if you want to.

Mitt Romney Paid For College By Selling Off A Few Stocks, So Why Don't You?