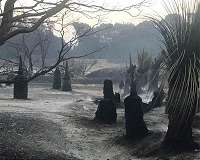 Fire, wind and water: The new normal in a land Down Under

Windsor, Australia (AFP) March 23, 2021 - Seventeen-year-old Rory Kirkland has lived in Australia for three years, but he has already experienced the full range of the country's extreme weather, from searing heat to unprecedented bushfires and now floodwaters lapping the door of his family home.

Most of the year, the Hawkesbury River meanders calmly through the sandstone escarpment, valleys and lush farmland of Australia's east coast before it merges with the South Pacific.

But a week-long downpour has swollen the 16-million-year-old watercourse and several nearby rivers into 13-metre (43-foot) high mud-brown torrents.

The floodwaters have been laden with leaves, branches, plastic bags, sewage, cars, shipping containers -- and at least one house.

"This is my front garden," says a welly-clad Kirkland gesturing to a handful of treetops jutting out of what looks like a vast inland lake.

"That tree is about eight or nine-foot (three metres) tall, so you can see there is only a foot of tree left. The water has come right up."

But few would have predicted the litany of disaster that has struck the "Lucky Country" in the last few years.

"We've lived here three years. We moved from England in 2017," he said, describing his brief time Down Under as "crazy."

For much of late 2019 and early 2020 fires burned around Windsor and nearby Sydney, enveloping the city of five million people in a soup of smoke and ash for weeks on end.

"Last year was the bushfires and the floods, and now this year is another flood," said Kirkland.

"It's been crazy, especially compared to life in England. It's almost extreme. It's torrential rain, or it's super hot 40 degree days, and the forests are on fire."

This latest disaster -- which hit Australia during government-imposed travel restrictions to prevent the spread of coronavirus -- was not unexpected.

Scientists say a warmer atmosphere is capable of holding more moisture and so every one-degree rise in global warming is likely to mean around seven percent more rain.

"Extreme floods have been recorded in the valley since the earliest years of British occupation over two centuries ago," said ecologist Jamie Pittock of the Australian National University.

"Now, climate change is likely to increase the frequency of dangerous floods."

After years of drought, some parts of eastern Australia have seen almost a year's worth of rainfall in a few days, while being buffeted by near gale-force winds.

Kirkland shot a timelapse video of the flood's arrival, starting with a few rivulets of water exploring land not far from the riverbank and becoming a plane of filthy water.

"We were told to evacuate," he said. The family heeded that warning for one night but returned when it became clear that the power supply would not be cut.

Although the rain has now eased significantly and the water level has receded a little, a new surge is still possible.

"It's come up right to our front door almost. It's about a metre away. If it peaks today, it might come right up to our doorstep," he said.

His neighbours have not been so lucky, losing the bottom floor of their homes and forcing them to flee.

As they wait for the floodwaters to ebb and the hard clean-up to begin, Australians -- even the new arrivals -- are gradually coming to terms with a new normal where "once-in-100-year" events happen with alarming frequency.

Fire, wind and water: The new normal in a land Down Under