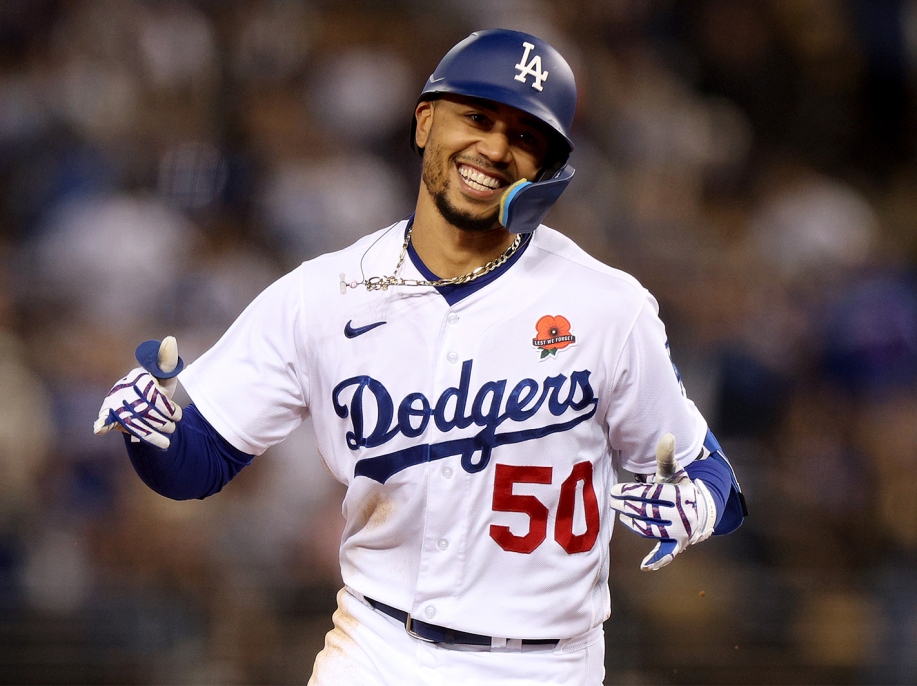 The Los Angeles Dodgers possess such a dazzling amount of star power that it can be easy to take the individual components for granted. Can anyone truly stand out on a roster with multiple former MVPs, a handful of future Hall of Famers and an MLB-high 13 players who’ve been named All-Stars at some point in their careers? Does anyone need to? As we saw just last year, L.A. can match the franchise record for most wins in a single season (106) despite some of its biggest names suffering down performances. Players come and go, but the machine chugs along and just keeps winning.

Maybe that’s why brilliant right fielder Mookie Betts sometimes flies under the radar relative to his peers. We know Betts is capable of playing at a superhuman level, but since he arrived in Los Angeles before the 2020 season, the moments when the Dodgers have genuinely needed him to play that way have been few and far between. This year, though, Betts is reminding us that he is indeed capable of outshining Hollywood’s many other bright lights — and maybe even the glow from the other stars across the league.

with the Boston Red Sox in 2016, when he finished second only to default choice Mike Trout in wins above replacement23 with 8.9 WAR. (Trout edged him out with 9.5 WAR.) Showcasing an impressive mix of power, speed and eye-hand coordination, Betts was the only player that season to have at least 30 home runs, 25 stolen bases and a .300 batting average — and he joined Bryce Harper and Jacoby Ellsbury as the only non-Trout players to produce a season with so many WAR in the 2010s to that point.

But Betts was just getting started. Following a more mortal (but still MVP-candidate-worthy) 5.9-WAR season in 2017, Mookie and the Red Sox had a year for the ages in 2018. Propelling his team to a franchise-record 108 wins, Betts produced 10.6 WAR — the 29th-most by any batter in a single season since 1901 and the most by anyone not named Barry Bonds since Cal Ripken Jr. had 11.1 WAR in 1991. Betts helped Boston cap off its season with a World Series victory in October,24 and then for good measure, he avenged his 2016 AL MVP defeat against Trout by beating him for the honor in 2018. Top to bottom, it was one of the most incredible individual seasons any player ever had in MLB history.

Naturally, some regression was inevitable after such a charmed campaign, and Betts dropped to 6.8 WAR in 2019 — again, still a borderline MVP-type season — as Boston struggled to recapture its form from a year prior, ultimately missing the playoffs. Then, shockingly, the Red Sox traded Betts to L.A. in a three-team blockbuster, selling high on their star (rather than watching him walk in free agency) while also pawning off David Price’s contract and attempting to dodge the luxury tax.

It was a trade that will be debated forever, particularly given how both teams’ fortunes have gone in the years since. But a player who could legitimately be considered baseball’s top star does not usually get shipped off in the middle of his prime. (With some exceptions.) So all eyes were on Betts to prove Boston wrong and show that he did indeed belong in that tier of superstars for the long haul.

That’s exactly what he did in 2020. In MLB’s shortened 60-game pandemic season, Betts finished second in position-player wins above replacement (and MVP voting) behind Atlanta’s Freddie Freeman, with 3.2 WAR. Prorated over a full, 162-game schedule, that number equates to an 8.7-WAR performance, which would have represented the third time in five years that Betts had at least 8.5 WAR in a season — something only 18 other players25 have done since 1901. Yet again, Betts also helped lead his team to a championship, becoming one of only nine batters ever with multiple seasons of 8.5 or more WAR per 162 games for a World Series-winning team (and one of only two — joining Tris Speaker — to do it with two different franchises).26

Betts went into 2021 on top of the baseball world once more, but as the season progressed, he was among the Dodgers who failed to meet their previous benchmarks for performance (even if he wasn’t one of the prime examples). Battling arm, back and hip ailments all year, Betts missed 40 games and was limited to just 23 home runs, a .264 average and 3.8 WAR — the latter counting as his fewest per 162 team games in a season since he had 2.0 in a third of the year as a rookie in 2014. Perhaps most concerningly, many of Betts’s underlying Statcast metrics were down relative to the league as well, including his expected batting average, hard-hit ball rate, sprint speed and outs above average on defense. At age 29 by the time the Dodgers had bowed out of the playoffs, it was fair to wonder whether Betts was beginning to enter the decline phase of his career.

But in 2022, Betts is back with a vengeance. He currently ranks second among batters in WAR with 3.4, mere fractions of a win behind Manny Machado of the San Diego Padres (who is also off to a scorching start in the same division). Overall, Betts’s numbers once again look like they did during his most dominant seasons from earlier in his career, and his current per-162 WAR pace of 10.3 is in the same neighborhood as it was during his all-timer of a year in 2018. Although his sprint speed is still down relative to its pre-2021 levels, practically all of Betts’s other Statcast vital signs have snapped back to where they were when he was vying for the crown as MLB’s top player.

And you can make a case that he does, in fact, deserve that title. Over the past five years, no player in MLB — whether a batter or a pitcher (or both, as in the case of Shohei Ohtani) — has more WAR than Betts’s 28.0 mark:

If he plays to his current prorated pace, Betts would become just the 10th batter since 1901 to post multiple 10-WAR seasons in a career.27 Because of regression to the mean, that may not happen — but even a fourth 8-WAR season before the age of 30 would be rare. (That’s only happened 15 times in modern history.) And with his Dodgers carrying an MLB-best 21 percent chance of winning the World Series, Betts could very well add a third high-WAR championship campaign to his resume by season’s end.

Anytime you can join a club with Babe Ruth, Lou Gehrig, Mickey Mantle and Joe DiMaggio — both as a winner and an individual performer — that’s a historic accomplishment. But Betts is just that special of a player, even if the temptation is to let his greatness fade into the Dodgers’ overall talent milieu.

Check out our latest MLB predictions.