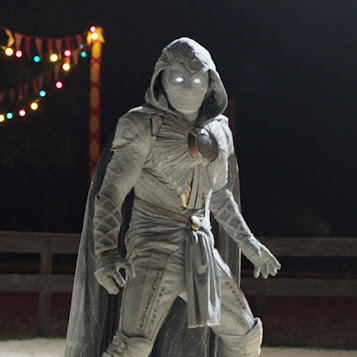 Steven Grant, a worker at the British Museum with a specialist interest in Ancient Egypt, starts having a very weird time. He has odd blackouts, during which he can't remember anything that happened. After one such blackout, he wakes up in the Austrian Alps in possession of a mysterious artefact. He starts hearing voices, including one claiming to be the Egyptian moon god Khonshu. Eventually he discovers the truth: he is one of multiple personalities inhabiting the same body, sworn to the service of Khonshu in the form of the Moon Knight.

Moon Knight is the latest of the Official No Really In-Continuity Disney+ Marvel TV series, following on from WandaVision, The Falcon and The Winter Soldier, Loki and Hawkeye (plus animated series What If...?). It adapts one of the obscurer Marvel Comics characters to the screen, namely a masked vigilante who tackles crime and punishes criminal in the name of an ancient Egyptian god (the Egyptian gods, like the Norse and Greek ones, turn out to be real, obviously). The spin is that the character suffers from dissociative identity order, one manifesting as the English-accented, somewhat ineffectual Steven Grant and the other as American mercenary Marc Spector. The two are initially unaware of each other's existence and the revelation of their real mental state comes as something of a shock.
It's a tough role and to bring it to life convincingly, Marvel brought in the big guns. Oscar Isaac, one of the big actors of the moment, steps into both roles and delivers them with such panache that it's tempting to say he's the best marriage of character to actor seen in the entire MCU to date (and there's some tough competition). By turns funny, frightening, violent and intelligent, Isaac's performance is outstanding and helps cement Moon Knight was a watchable, interesting show, if not an always coherent one.
At least here the incoherence is on purpose, with the characters experiencing lost time, visions and hallucinations, some stemming from their mental state and some from the fact they are the servant of a decidedly impatient, peevish Egyptian deity who is also in conflict with servants of other Egyptian deities. The layers of illusion, magic and self-deception could be more confusing if Isaac didn't bring Marc/Steven's reactions to life so convincingly that you are completely sold on their journey. Extremely capable support is provided by May Calamawy as Layla, Steven's girlfriend, and Ethan Hawke as Harrow, one of the better recent MCU villains. Karim El Hakim and F. Murray Abraham also do a great job bringing Khonshu to life.
The six episode format also helps the show tick along, with enough time to explore its premise whilst not outstaying its welcome. The show even has the confidence to take an episode out to purely explore Steven and Marc's relationship (involving twice as much Oscar Isaac for your money) through a dream sequence/flashback episode that really works when it feels it shouldn't.
The show falters a little in the home running. Marvel can't quite help themselves and the finale is the typical CGI overload whilst people punch one another. There's at least some excellent direction here and some nice moments as other characters level up into heroes in their own right. There's also a morally murky ending which indicates that Moon Knight will return, although it's unclear if that will be in another TV show or on the big screen in some fashion. The CGI is mostly great but a few shots feel rushed, and the various attempts to sell that they're on location in Cairo fall a bit flat (they actually shot in Jordan). It's also amazing how resilient the ancient Pyramids are to huge amounts of CGI combat taking place around them (see also the Transformers franchise).
These are pretty minor gripes. The first (and only?) season of Moon Knight (****½) is highly entertaining, centred as it is in Oscar Isaac's outstanding performance and some great pacing. The show is available to watch now on Disney+ worldwide.
Thank you for reading The Wertzone. To help me provide better content, please consider contributing to my Patreon page and other funding methods.
Source: thewertzone