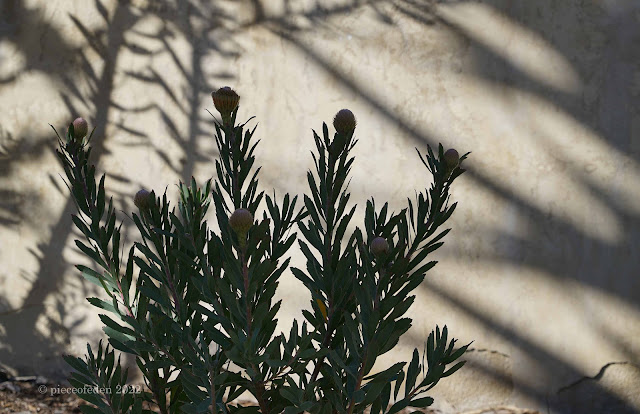 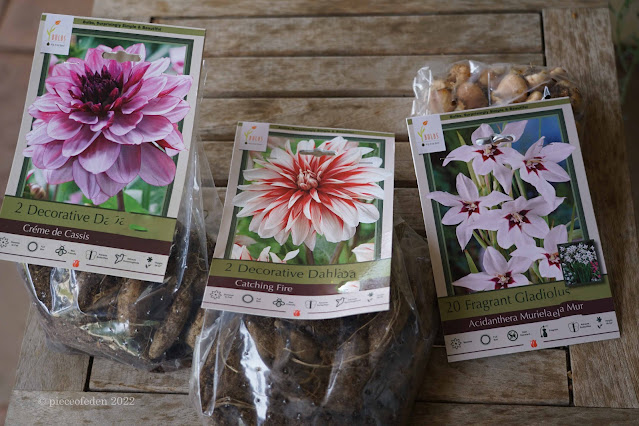 I'll put the Dahlia tubers where I removed some roses earlier this winter.  I tried 'Creme de Cassis' a year or two ago, but none of the tubers grew.  'Catching Fire' planted a few years ago produced one weak grower with really beautiful flowers.  Trying again.

Also Acidanthera (now Gladiolus) murielae, a species Gladiolus.  I know to plant the corms in a pot, not in the ground, with screen over the pot's drain holes.  Gladioli are annoyingly persistent even if you pull the corms--tiny new corms grow from the original and stay in the ground and grow.  It is difficult  to get rid of them.  I planted a few Gladioli for fun when we moved in to this home 20 years ago, and have been trying to get rid of them ever since.  Hopefully potted corms will produce flowers.  They'll be tossed after that, flowers or not.  Just to experiment, without the annoyance.

Happy to find another Centaurea ragusina.  Had two, wanted one more, to form a trio among trios of Agaves out front.   A favorite plant.  Tidy. 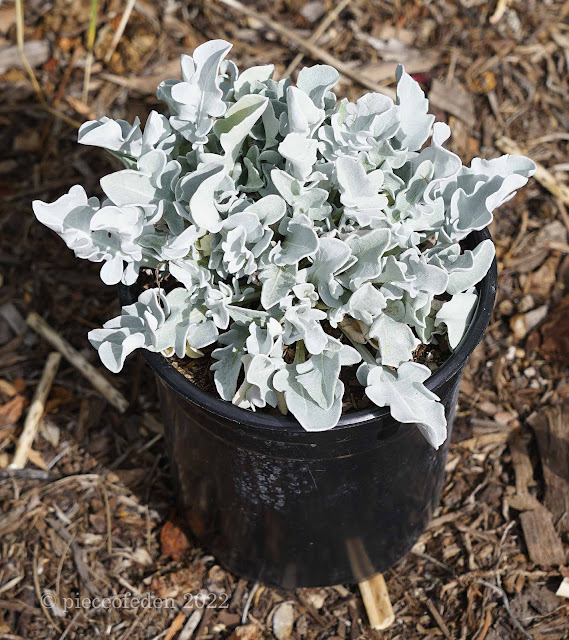 There.  A triangle of Centaurea to go among the triangles of Agaves: 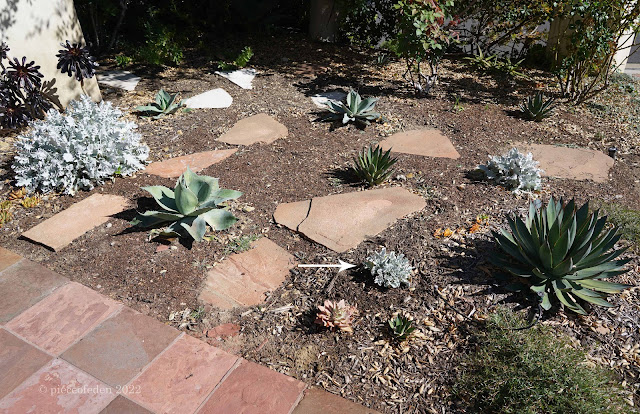 A small Didelta 'Silver Strand'  was planted where the Centaurea now is.  As an experiment, I moved the Didelta to the driveway planter to see how it will hold up to the extreme heat the planter endures in summer. 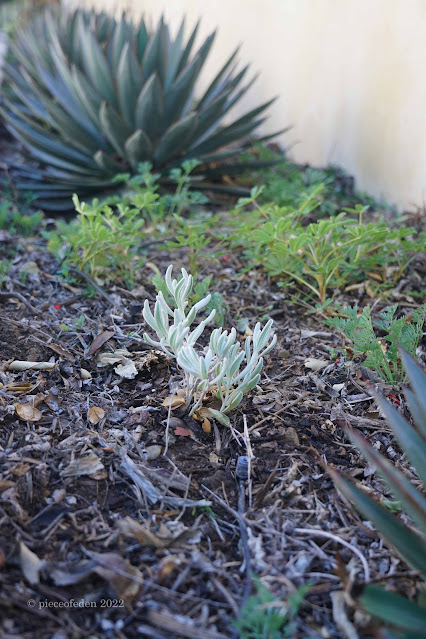 How are those three bare root roses I planted back in January?

'South Africa' on its own roots took off immediately.  It looks great.  It already has a flower bud: 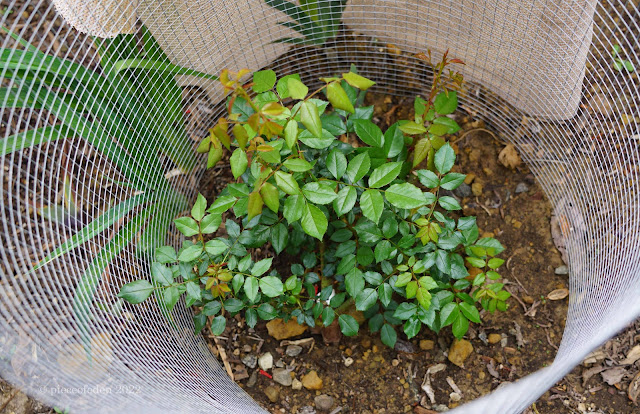 Grafted 'Firefighter' looks...hmm...acceptable.  Unfortunately, a $&!*^%# rabbit got at it.  I gave it a better rabbit guard and the damage ceased.  Blankety-blank rabbits. 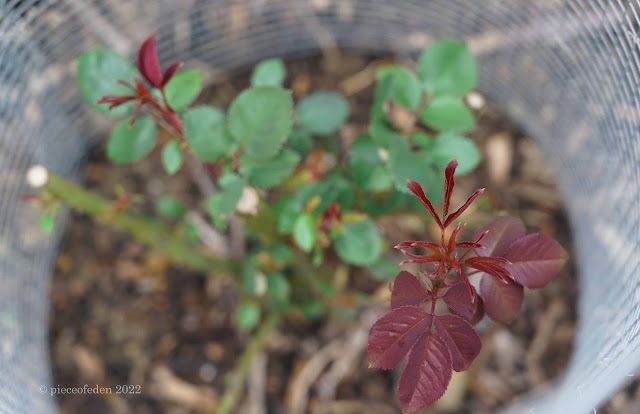 Grafted 'Yves Piaget' has yet to break dormancy and is slowly drying up, despite daily attention to sufficient water and protection. 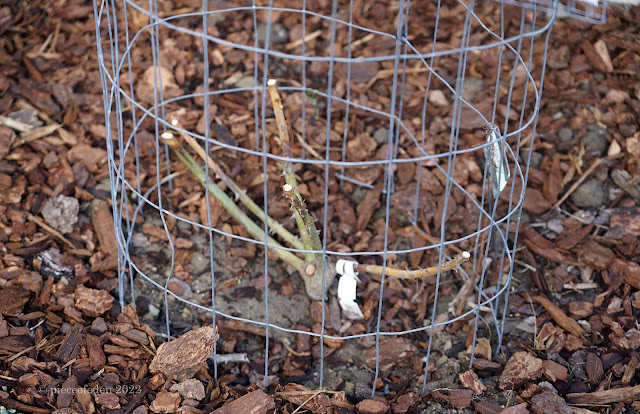 So I impulse-bought one that is growing, not malingering: 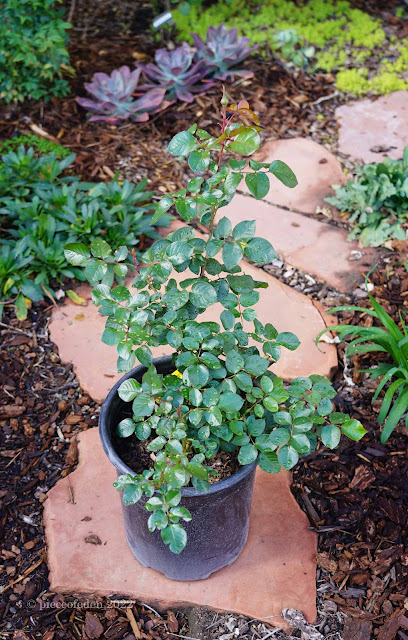 I could pot up the malingerer and see if it will wake up or not, and give the leafed-out copy that place in the ground.  Yep, I'll do that.  Here we go: 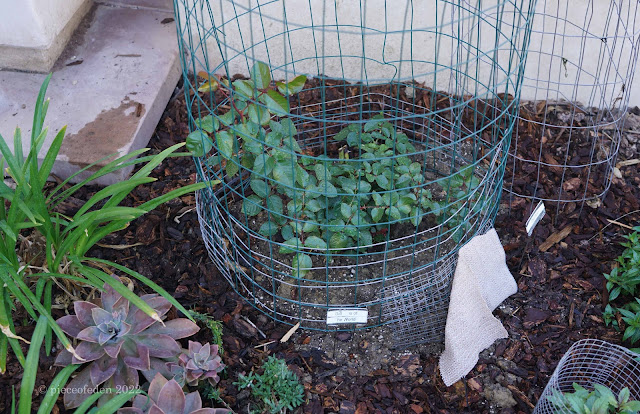 The still green-canes on the first 'Yves' are shriveled.  Bad sign.  No root growth.  Another bad sign.   I stuck it in a big container of moist potting mix, but it appears hopeless.

Tuesday and Tuesday night we got a total of 0.08" (2 mm)  of rain.  Just southeast of us, a few spots got nearly a half inch (12 mm) Just the luck of the terrain.  There were some strong wind gusts, too.  A large branch snapped off the largest, happiest of the 'Slim' Callistemons: 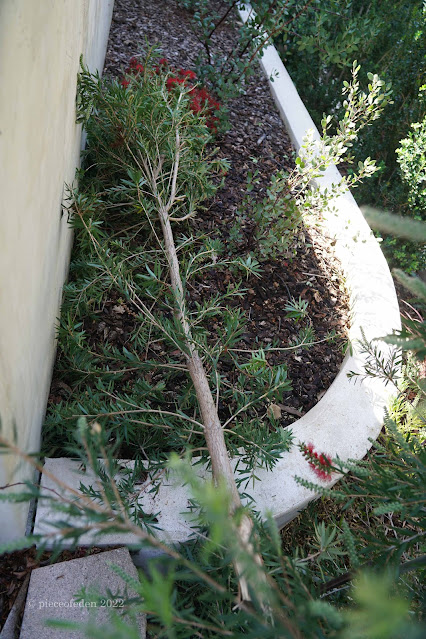 It gets extra water when I clean the pond filters.  The water is dirty with fish waste and full of nutrients.  The plant still looks great, even with a missing branch. 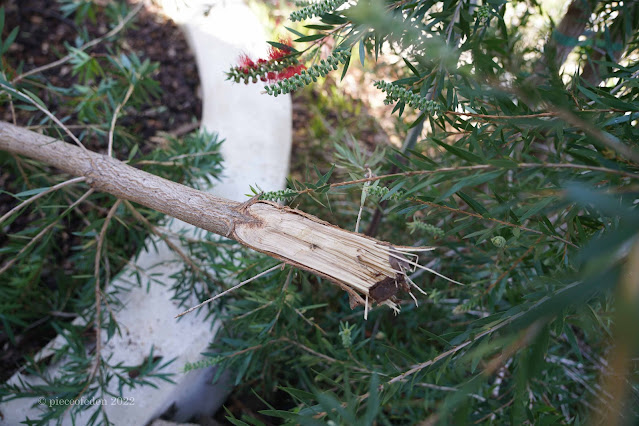 Very small (knee high) Magnolia laevifolia has four flower buds!  That was a surprise.  This winter it got a very small amount of chelated iron with nitrogen because the foliage looked yellowy.  Seems to have helped. 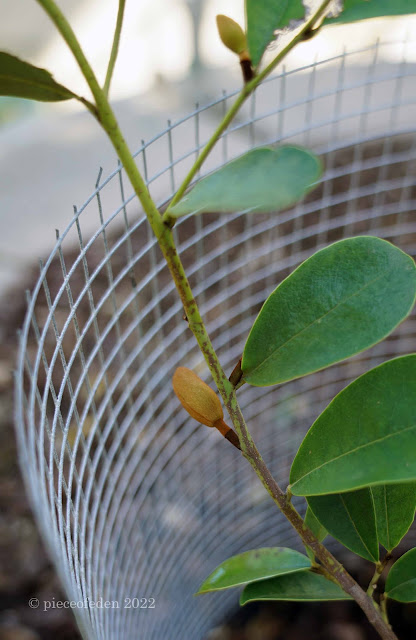 Despite the strong gusty winds, the plants liked the rain.  Leucadendron 'Pom Pom' is getting ready for her late winter show.  The cones will soon turn a brilliant scarlet and the surrounding bracts a lemony ivory. 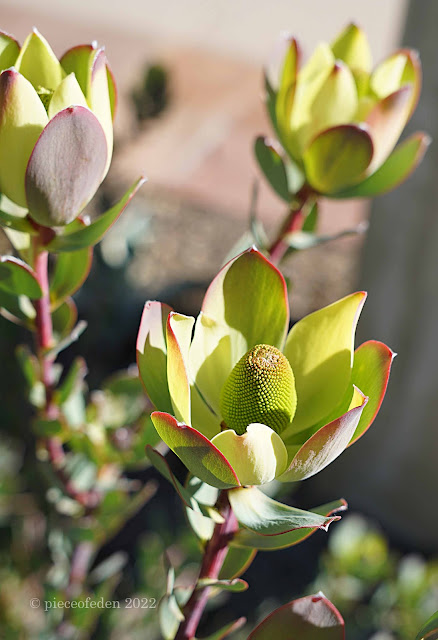 An Orange-crowned Warbler sipping nectar from the flowers of Aloe marlothii.  It blended in with the flowers: 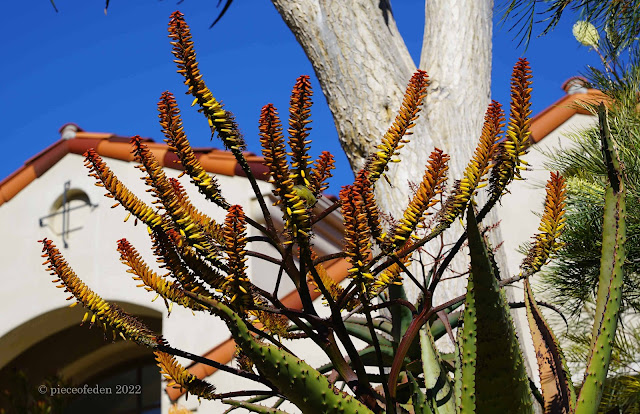 The little warbler finally looked up.  There it is! 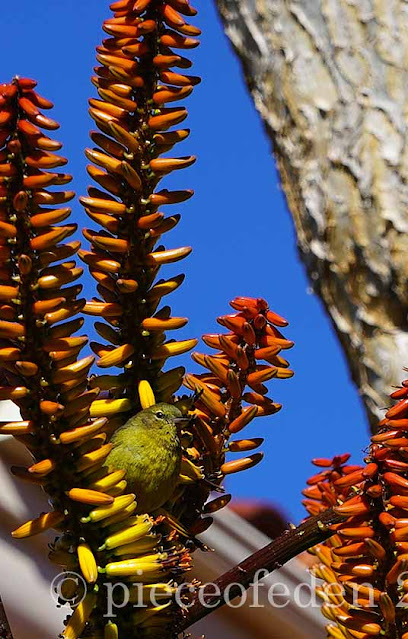 Kumara (aka Aloe) plicatilis is sending up flower stems: 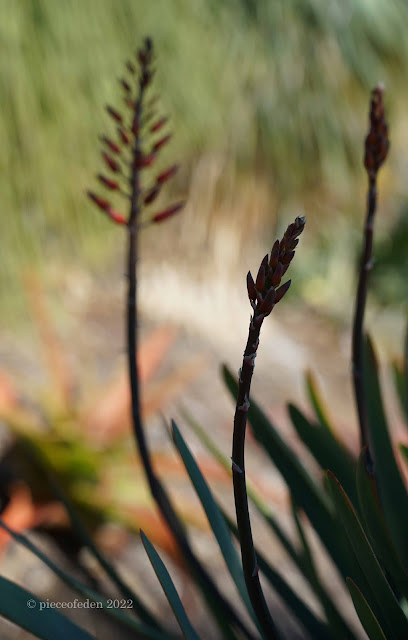 So is the cutting rooted last Spring: 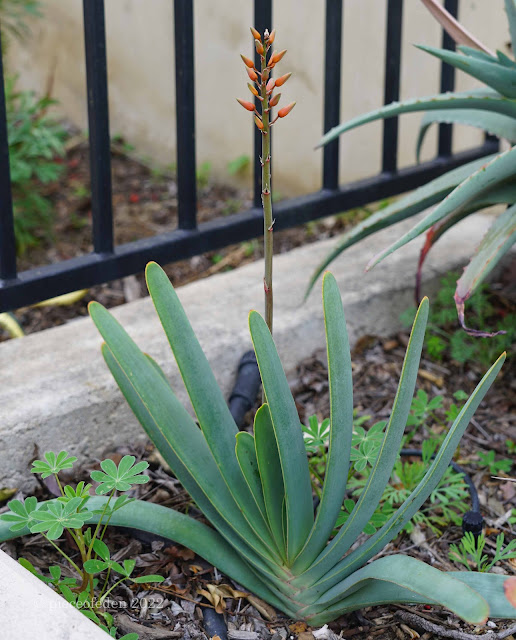 The first Hippeastrum papilio flower is starting to open.  I moved the clump last year at the wrong time and got no flowers as a result. 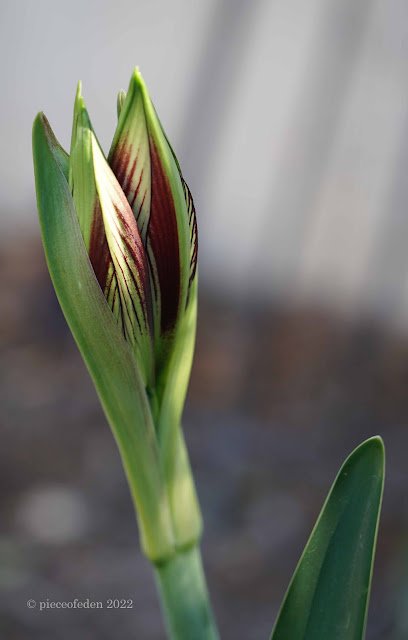 Spring is on the way.  I wish winter would hang on and give us some rain.  Enjoying the Freesias: 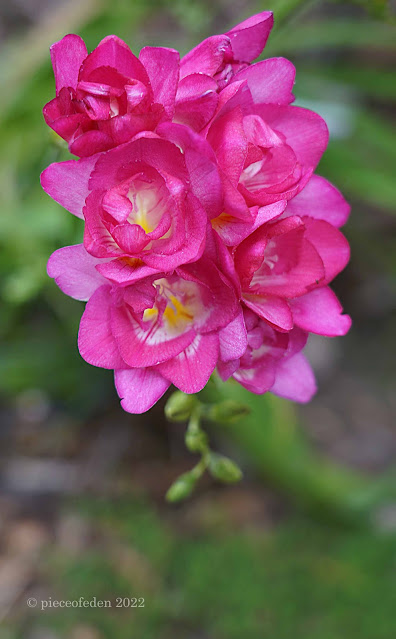 This scarlet color is very photogenic: 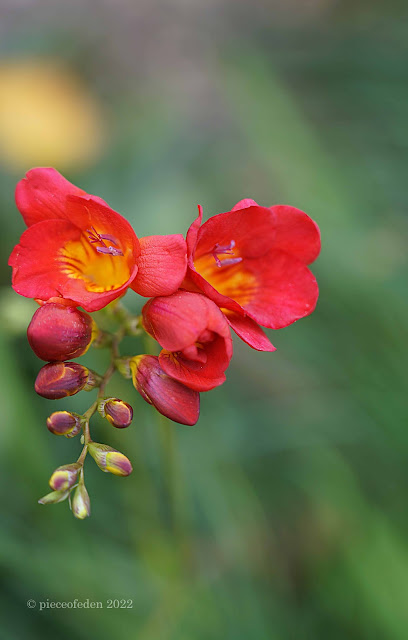 Remember the olden days when digital cameras were not very good at capturing red accurately?   They've gotten so much better. 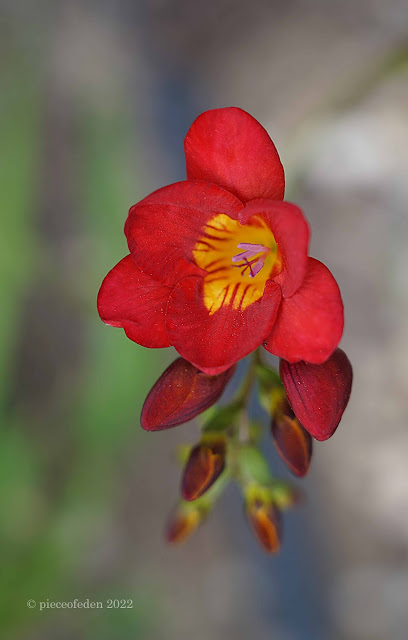 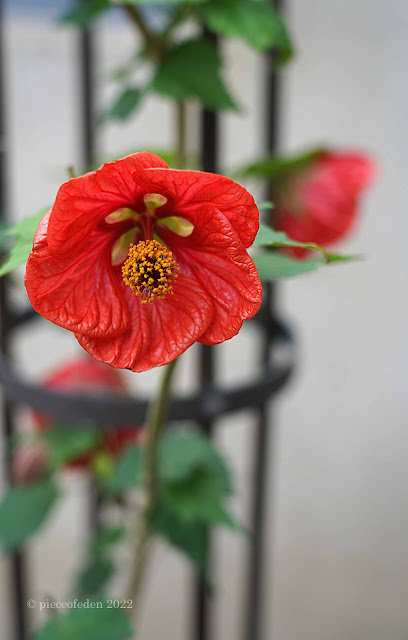 So does 'Drakensberg Daisy Orange' 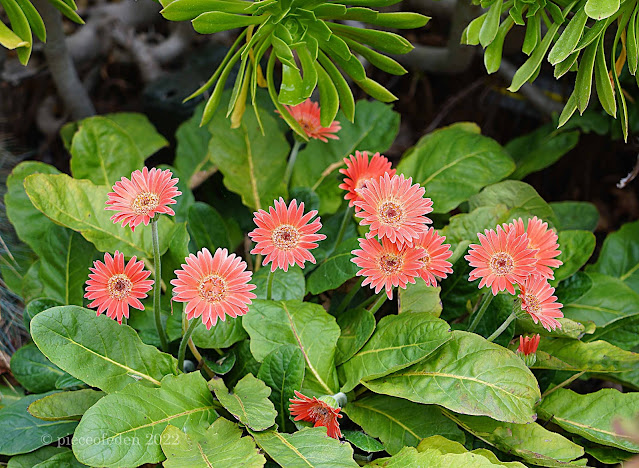