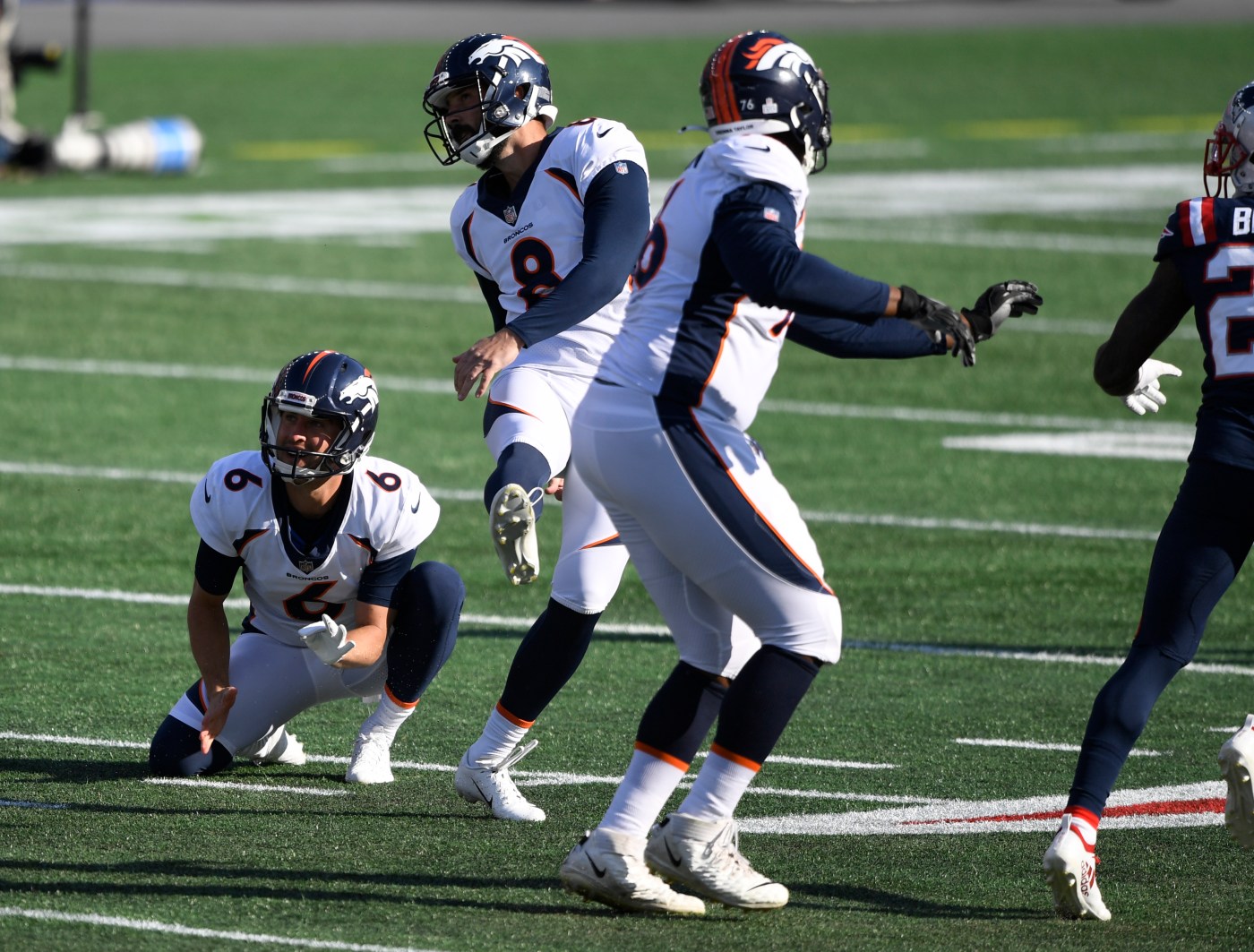 Brandon McManus kicked six field goals Sunday in New England to set a franchise record and further validate his journey to becoming one of the NFL’s top placekickers.

McManus accounted for all of Denver’s points in an 18-12 victory against the Patriots, connecting twice from 50-plus yards, and prompting head coach Vic Fangio to give him a game ball. He’s the first player in team history to convert six field goals in a single game.

When asked where his performance ranked in his seven Broncos seasons, McManus said: “It has to be up there” near the top. But for reasons beyond the box score.

Playing the hero in Foxborough is especially sweet when you consider his backstory.

Prior to Sunday, McManus last visited Gillette Stadium in 2014 during his first NFL season with the Broncos. The Patriots rolled to an easy 43-21 victory. What McManus remembers, though, is a field goal attempt gone wrong — and the unfortunate fallout.

“I hit a 41-yarder off the right upright,” McManus said. “Then a week or two later … they ended up cutting me.”

It’s true. The Broncos cut McManus in November of 2014 after he missed another field goal, this time against the Dolphins. McManus landed back on Denver’s practice squad a month later, but the consequences of his New England mistake set the groundwork for a meteoric rise.

“This place is special for me to come back and perform like that,” McManus said. “It’s always difficult to kick here in a windy stadium like this.”

The flipside to his heroics was Denver’s inability to score touchdowns, which kept it from blowing the game open.

Four of his field goals were from outside 40 yards, but the Broncos twice settled for chip shots while sniffing the New England end zone. Fangio told reporters: “I’d like some of those to be touchdowns, as everybody on this team would, and every Bronco fan would. We’re going to have to work harder finishing our drives, particularly down in the red zone.”

But Fangio had no problem leaning on McManus.

“They proved to be enough to win the game,” Fangio said. “Right now, that’s all we need.”

Fangio considered giving McManus a seventh field goal try in the fourth quarter, leading 18-3, when Denver opted to punt instead. It would have been another McManus attempt from 50-plus yards.

“If he had missed, I didn’t want to give them good field position and jumpstart their offense there,” Fangio said.

McManus added that he had no problem with the decision.

“I like to play the percentages to win,” McManus said.

The Broncos displayed a long-term commitment to McManus, 29, as their placekicker in September with a four-year contract extension that will keep him in Denver through the 2024 season. Last year, McManus was 29-of-34 on field goal tries with zero misses from inside 40 yards. He’s off to another hot start this season (12-of-13) with his only miss from 58 yards.

McManus, one of only a few Broncos left from the team’s last Super Bowl victory, is respected among Denver’s top leaders — despite being a kicker. On Sunday, during postgame video interviews, Broncos starting quarterback Drew Lock finished his time with a nod of respect.

“We can pass it over to the legend himself, Brandon McManus,” Lock said.

McManus smiled. “This is Drew’s second year in the league. He’s got a lot to learn. There are a lot of legends before me,” he said. “Obviously, it’s a great compliment from him. I want to continue playing well, kicking well, and giving us a chance to win.”