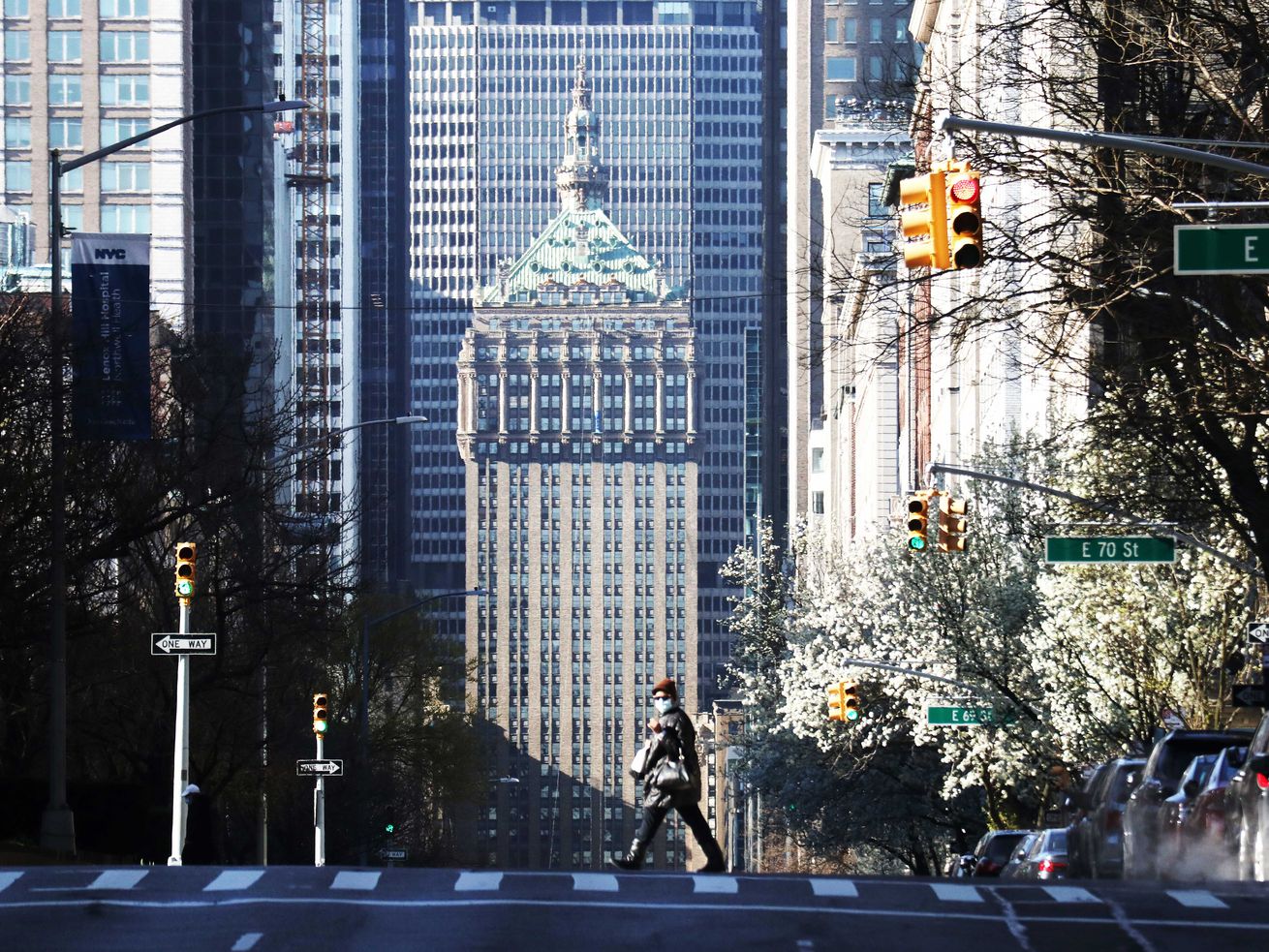 A woman walks across an unusually empty Park Avenue in New York City on March 26, 2020. | Gary Hershorn/Corbis via Getty Images

Gov. Andrew Cuomo, meanwhile, says this is news to him.

President Donald Trump said on Saturday that he’s considering an enforceable short-term quarantine in certain parts of the New York metro area after a conversation with New York Gov. Andrew Cuomo — a claim that Cuomo says he has no knowledge of.

“I just spoke with Andrew Cuomo, I just spoke with [Florida Gov.] Ron DeSantis. We’re thinking about certain things. Some people would like to see New York quarantined because it’s a hot spot,” Trump told reporters on the White House lawn, referring to the number of reported coronavirus cases in the area. “We might not have to do it, but there’s a possibility that some time today we’ll do a quarantine, short-term, two weeks on New York. Probably New Jersey, certain parts of Connecticut.”

But Cuomo, who was giving a press briefing at the same time that Trump spoke to reporters, said he had not discussed that idea with the president and expressed concern about the idea. “I haven’t had those conversations,” Cuomo said when asked about Trump’s statement.

“I don’t even know what that means. I don’t know how that could be legally enforceable,” Cuomo said at his press conference in Albany. “And from a medical point view, I don’t know what you would be accomplishing.”

”But I can tell you, I don’t even like the sound of it,” he continued.

The disconnect between Trump and Cuomo over a potential quarantine is the latest instance of public clashes between the two politicians as they struggle to coordinate a response in a region that has become the epicenter of the American coronavirus crisis.

Complicating things further is the fact that it’s difficult to know how seriously Trump’s quarantine statement should be taken, given his habit of making false claims about coronavirus-related policy launches in recent weeks, such as his haphazard rollout of the Defense Production Act, in which he clashed with a Federal Emergency Management Agency administrator over directing the production of protective gear and life-saving medical devices.

However, Trump seemed to double down on the idea of a quarantine in the Tri-State area later in the day after his first talk with reporters. After his initial comment he tweeted, “I am giving consideration to a QUARANTINE of developing ‘hot spots,’ New York, New Jersey, and Connecticut. A decision will be made, one way or another, shortly.”

And when speaking to reporters another time this afternoon before boarding Air Force One to Norfolk, Virginia, Trump signaled again that a decision would be imminent.

“We’re looking at it, and we’ll be making a decision,” Trump said. “A lot of the states that aren’t infected that don’t have a big problem, they’ve asked me if I’d look at it so we’re going to look at it. It’ll be for a short period of time if we do it at all.”

When asked for details about how he’d pursue a quarantine, he told reporters that would talk about it later with Cuomo.

Federal and state policymakers have been scrambling to figure out how to respond to the explosion of cases coming out of New York City.

Earlier in March, Cuomo used the National Guard to create a one-mile ”containment zone” around New Rochelle, a suburb of New York City, to help slow a cluster of cases. On March 27, New York City accounted for over a quarter of all confirmed cases of coronavirus infection in the US.

Vox’s Jen Kirby and Emily Stewart report that New York is expected to get worse: “Though the state, including the city, has been under strict stay-at-home orders since Sunday, New York is not expected to reach its peak in coronavirus cases for at least another three weeks. On March 25, New York Mayor Bill de Blasio predicted that, in a city of 8 million, half the population should expect to get coronavirus before the pandemic ends.”

But Trump has struggled to work productively with Cuomo on mounting a response to the crisis.

Earlier in the week, for example, Cuomo complained that the Federal Emergency Management Agency’s decision to send New York 400 ventilators from a national stockpile was entirely inadequate for the scope of the crisis. “You want a pat on the back for sending 400? We need 30,000,” said Cuomo on Tuesday. Trump fired back later that the governor “should have ordered the ventilators” when he had a chance.

Now Trump’s quarantine remarks — and Cuomo being in the dark about them — suggest he’s contemplating pushing for what could be a hugely consequential policy change without consulting the relevant local policymakers.

“The specifics & impact of this new directive by tweet are unclear & uncertain,” tweeted Democratic Sen. Richard Blumenthal. “The effect may be more confusion than confidence.”

Moreover, it’s unclear if Trump is simply floating an idea that he hasn’t actually thought through and has no real intentions of implementing. In recent weeks, Trump has made dozens of false claims, such as falsely promising that anyone who wants to get tested for coronavirus can get tested. Trump has also been touting hydroxychloroquine as a miracle drug for Covid-19, even though there has been no substantial evidence proving whether it’s effective, or even safe. Meanwhile, lupus and rheumatoid arthritis patients are experiencing a shortage of the drug as people heeding Trump’s message are stocking up.