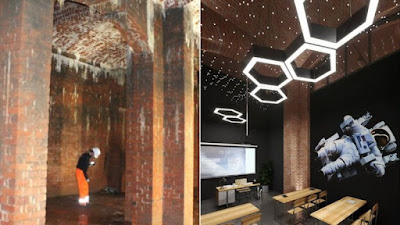 
Planetarium planned for underground Victorian reservoir
Some welcome news coming out of the East Midlands in this next article, which details the fascinating-sounding plan by a Nottinghamshire-based observatory to make use of a long-dormant bit of Victorian engineering in the creation of a new visitor attraction.
This is the volunteer-run Sherwood Observatory in Sutton-on-Ashfield, owned by the Mansfield & Sutton Astronomical Society, which also has as part of the land next to the observatory the remains of an old disused 19th century reservoir.  Now the plan, judging by this recent report from the B.B.C., is for what is left of this long-forgotten facility to be turned into a new planetarium that will complement the existing building and its telescope.
The proposed design looks jolly interesting and I am pleased to note the way in which they intend to keep the existing Victorian structure while merging it with some forward-looking, 21st century space-age motifs - both of which are in keeping with and sympathetic to the building's heritage as well as its new-found purpose.  All-in-all it looks to be a successful fusion of old and new and I look forward to hopefully seeing it become reality.
The provision for teaching areas has also been considered in the design of the new building - a remarkable-looking domed structure that will sit partly above ground as well as within the large cavity that once formed the reservoir - with part of the underground area to be given over to classrooms that would give visitors further insight into the work of the society, the exhibitions and information gleaned from the observatory on the cosmos in general.
The importance of this to the furtherance of STEM learning in the U.K., especially among young people, cannot be overestimated and I am glad to see that the Heritage Lottery Fund recognises this as well and has put £36,000 towards helping realise the project.  It sounds like there is still some way to go, with more funding yet required, a firm design plan to be formulated and more talks with the HLF in the offing but hopefully with luck the Mansfield & Sutton Astronomical Society can make good on their aim to have this splendid new building up and open by their 2023 target.  That they regularly had over 3,000 visitors a year before Covid struck is a testament both to the work of the volunteers and the attraction of the stellar sciences in general and I sincerely hope that they can reach their goal, build their Victorian-based planetarium and attract many more visitors from Nottinghamshire and beyond - perhaps even including the next generation of astronomic scientists - from 2023 onwards.
Source: eclecticephemera