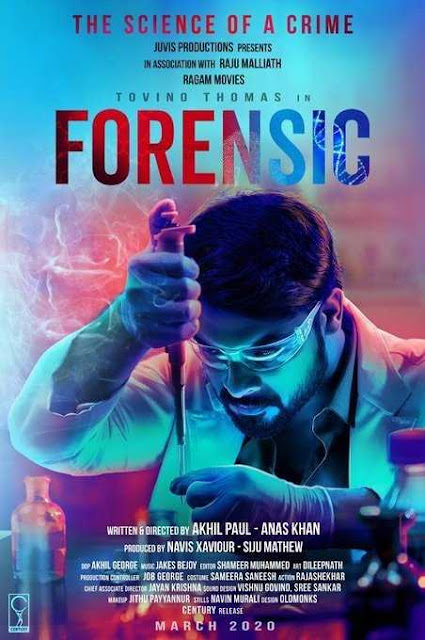 Rithika Xavier (Mamtha Mohandas) is heading a police team investigating a child’s murder in Thiruvananthapuram when she realises she has a serial killer on her hands. Samuel John Kattukkaran (Tovino Thomas), the forensic scientist assigned to her, is a genius with a reputation for overreach. He has an old personal connection with Rithika.
From the moment Sam enters the picture, from the treatment and presentation of the character in his very first minutes on screen, we know it is he who will crack the case. Scenes are set up with the obvious intent of giving him an opportunity to prove his smartness. At first he patronises his junior colleague and throughout outshines the senior to whom he reports – both of them women, marking the token female presence so common in Malayalam cop sagas while men go about actually solving the crime/s at hand.
Perhaps the only thing left was for Sam to wear a headband saying: “designated hero of the film.” Subtlety, you see, is not the forte of this crime thriller directed by Akhil Paul and Anas Khan. If you are willing to forgive Forensic its many venial sins on this front – since they are silly but never offensive in the way a certain kind of loud, misogynistic, male-star-driven Mollywood cinema is – you might enjoy this harmless crime drama up to a point, as I did.
Until the last half hour or so when the killer is unveiled and motivations revealed, Forensic’s deductions are impressive enough and related in an easy enough fashion to make the film an entertaining ride. Sure, the background score should have been played down. Sure, several scenes are awkwardly constructed to pointlessly over-emphasise a point, but well, no one is saying Forensicis high art. Sure, an arrest made by Rithika in an old case recounted in the present was senseless, but that can be put down to standard police inefficiency, even if it seems inconsistent with the portrayal of Rithika. Sure, little thought has gone into two scenes of arrests when the police bring their suspects out in public with faces uncovered knowing that crowds are present outside. Sure, it is hard to believe that so many little girls were lured away by a charmless criminal. Sure all the above are true, but until that last half hour, Sam’s work sustains the film. 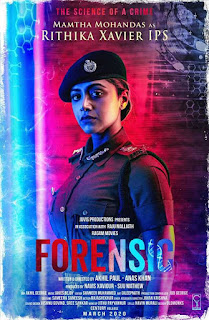 I am not certain any Indian state police department has the facilities that Sam and his associate Shikha (Reba Monica John) have at their disposal – maybe they do, maybe they don’t, I am just wondering based on news reports and conversations with actual personnel that reveal how cripplingly ill-equipped police forces are in India. However, drawing on those very discussions, it does seem possible that a single Indian investigator might indeed have to be a Jack of all specialities within forensics, as Sam is shown to be in this film, due to a lack of available trained humanpower (far removed from the ultra-super-superspecialties I have been discovering through the addictive American real-life-crime series Forensic Files I have lately been binge-watching on Netflix). Either way, Sam is smart enough and his logic roughly convincing enough to a layperson for his investigation process to be engaging.
Then the perpetrator is revealed, the identity is indeed unexpected, but Forensic sinks itself in the person’s convoluted, complicated, uninspiring back story. What made the recent release Anjaam Pathiraa so unforgettable was the heartbreaking crime that motivated its serial killer’s spree, the plausibility of the murder plan, the performances of the charismatic actors in that tragic back story and those bringing it to its present-day conclusion, plus the film’s insight into Kerala politics and society. In contrast, the reasons for the commission of the horrible crimes in Forensic are drowning in contrivances. Layer upon layer seems to have been added with the sole purpose of throwing in more surprises, except that they are not particularly meaningful or interesting. And since the audience has not been given an opportunity to be emotionally invested in the killer – either to be sympathetic or repulsed – it all adds up to a damp squib.
The finale of this film is suicidal, trying too hard to be clever and ending up being too clever by half.
This was really unnecessary, because Forensic is passable entertainment till then and some of the earlier unfolding twists are not half bad. It also has Thomas and Mohandas’ likeable personalities going for it and the actors’ comfort with their characters’ professions, Renji Panicker in a nice turn as a retired police official, an occasional sense of humour in the screenplay, the fact that it does not take the male protagonist down a conventional path of romance in the way most commercial Malayalam films do, and the other fact that he is not obnoxiously macho as so many leading men are in formulaic Mollywood police sagas.
But what is a crime thriller if its central criminal is dull? The answer to that question is a summation of what Forensic has to offer.
Rating (out of 5 stars): 2.25
This review has also been published on Firstpost:
https://www.firstpost.com/entertainment/forensic-movie-review-tovino-thomas-mamtha-mohandas-starrer-is-clever-till-it-gets-too-clever-by-half-8103381.html
Posters courtesy: IMDB