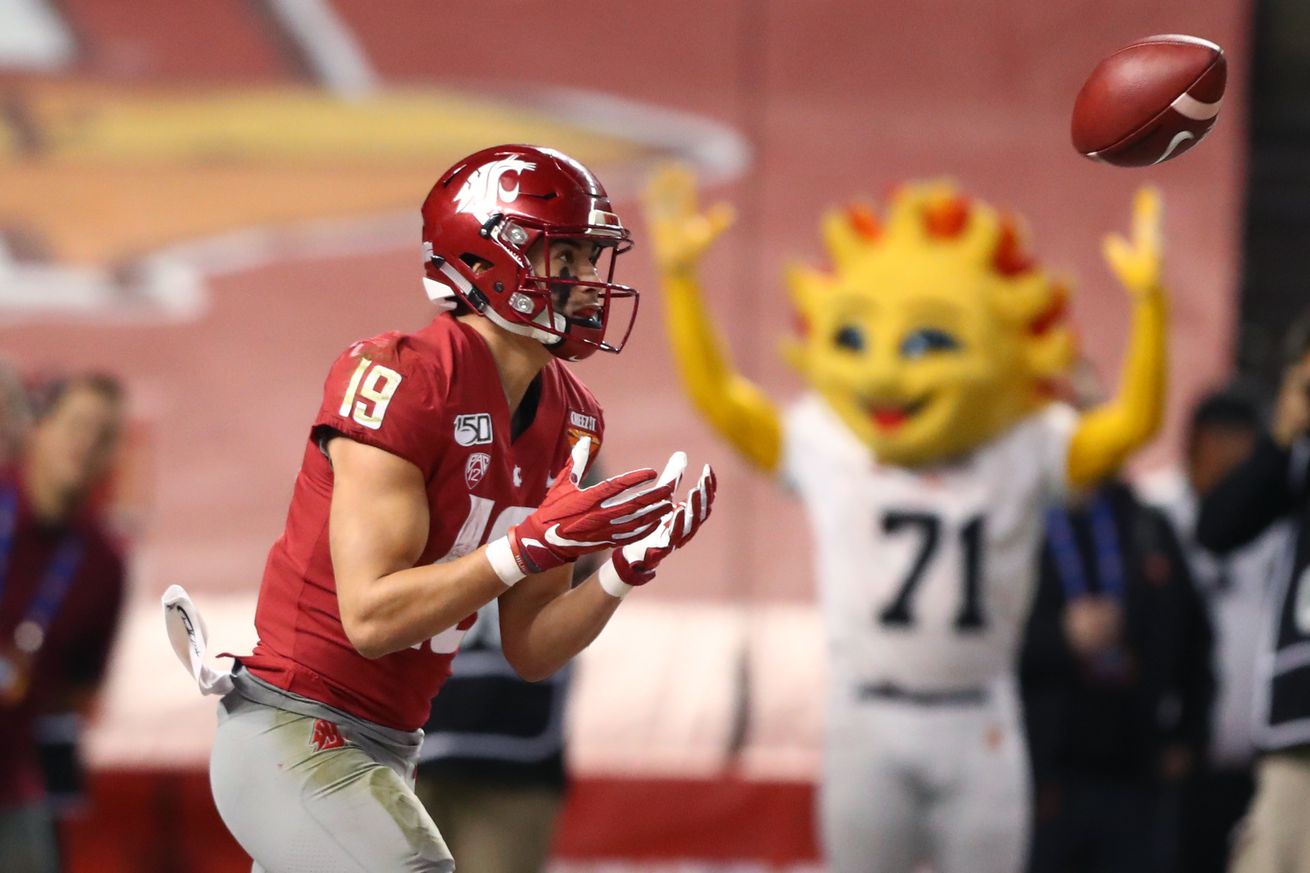 The Good, Bad and Ugly of WSU’s final 2019 faceplant

Good morning. There are probably a few apt metaphors for WSU’s fits-and-starts 2019 season, but one of the more humorous ones - to me anyway - is that in two of their losses the proverbial daggers were supplied by a Camden (Oregon) and a Kadin (bowl game). Not sure how you recover from that.

Such was the plight of the 2019 Cougar football team. Enough seemingly-decent plays to make you think they might be above average, followed by a cascade of awfulness that kept revealing the truth. The truth is that we knew who this team was before the calendar turned to October. They were able to beat bad teams and unable to beat average-to-good ones. Unfortunately for them, they ran into a good team Friday night and the result was entirely predictable.

As I sped through the recording, I began to realize how I cared more about getting to the end of the game than I did about the outcome. The idea of going to a fifth consecutive bowl game turned out to be a whole lot better than actually going to and playing in that game. I also wished that the season had ended after the Oregon State game. In a way, it did.

So that’s a wrap for Cougar Football, 2019. Like all of you, I certainly hope 2020 turns out better. Something tells me it’ll be more of the same.

Analysis: Washington State squanders scoring opportunities, Air Force soars to Cheez-It Bowl title | The Spokesman-Review
Max Borghi collected the handoff from Anthony Gordon, lifted his head and surveyed the area around him. Washington State’s sophomore, generally a gifted runner in tight spaces, had only a few yards to go but nowhere to maneuver as a wall of white jerseys collapsed on him.

John Blanchette: Sour Cheez-It Bowl epitomized how Washington State regressed this season | The Spokesman-Review
“We let them eat the whole clock up with our inability to stop them,” Leach said. Hmm. This from the guy who wipes his muddy shoes on time-of-possession stats.

Difference makers: Kadin Remsberg punches in decisive fourth-quarter touchdown to propel Air Force in Cheez-It Bowl | The Spokesman-Review
Arconado finished with 11 catches for a season and career-high 167 yards and one touchdown.

This Week in Parenting

Those brilliant folks at the Lego corporation know a sucker when they see one, and they clearly had me marked from miles away. Last year, the boys pointed out the Millennium Falcon at the store, which it turns out has more pieces than any other Lego set (until they build a bigger one). The local base exchange still had a couple hanging around this year, and I took the bait, thinking it would be a fun project for the boys and me.

It sat in my trunk for a few days, and Mrs. Kendall lovingly wrapped it up for Christmas morning. The boys were awestruck by the size of the present, and after they got done opening roughly 923 other things, they were ready to tear into it. As they did so, I had a Gob Bluth-like reaction, thinking I may have made a terrible mistake. We don’t have the biggest house over here, and this will likely be a months-long project. Where will we build the thing? When (if?) we’re done, where the hell are we gonna put it? Lastly, how will our next set of movers manage to ruin it? Because they absolutely will.

Well, there was no going back now. The boys were excited, and I was looking forward to the project. The enormity of this Lego set is something else. The instruction book alone weighs probably 15 pounds (!!!).

I may have made an impulse Christmas buy. This is our progress after day two. Yes, I said "our." pic.twitter.com/vwll8BIkz2

Not sure when we’ll be done, but I bet it’ll be much, much warmer outside.

I wrote “potential” because I have no idea what is new in the latest iteration of Star Wars and what is already known. I took the boys to the movie on the 26th, and it was roughly 30 seconds into the movie when I realized that it’s been a while. I think the last one I saw was Revenge of the Clones, and that was a long, long time ago.

My first question: Are we done now? Please?

Second question: Am I the only person who thinks this was little more than an accelerated two hour scavenger hunt? All anybody did was look for a coin or a badge or a triangle or a coin inside a triangle at some place nobody could find. Like, what?!

Anyway, in that first scene, somebody was killing a bunch of people and I had to lean over to the eight year-old and ask whether he was a good guy or a bad guy. I was quickly informed that he’s a bad guy. Somebody named Ren, or Ben, or, I don’t know, it was loud in there and they kept calling him different things in the dialogue. I had lots of questions during the movie, and many still linger. For instance, I thought the Emperor died back in 1983. How is he still alive after all these other movies? This main character - Ray - why is the Emperor trying to kill her if they’re related? Didn’t he learn his lesson from Vader and Luke?

One more about the Emperor - why was he being carried around on some sort of cable-strewn forklift? Why wouldn’t he just sit on that incredibly uncomfortable-looking “throne”? And since when do Jedi people have magical healing powers? Has this always been a thing? If it has, why didn’t Luke heal himself after he got his hand chopped off back in the day?

Further, what was with that bizarre thing where the Millennium Falcon and its evil pursuers were able to jump in and out of light speed? That ship was barely operable for most of the movies, and suddenly it’s able to hit hyperdrive like it’s nothing? Who was that guy flying it? He looked and sounded like a cheap knockoff of Han Solo. Was that Han’s kid or something? Nephew?

Not to go all Star Wars hipster, but the first three movies that came out are so far and away better than the others that it’s borderline embarrassing what’s happened to the franchise. The second trilogy was so bad that I didn’t even watch the final installment. This latest trilogy (I assume it is because it said “Episode IX” at the start) seems to be little more than Transformers in a different galaxy.

To take it a step further, if you managed to find 1,000 people who had never seen or heard of Star Wars, and you showed them the three different trilogies, I’d bet serious money that at least 900 would say the original trilogy was the best of them all, by a lot. As all of this was running through my brain, I turned to look at my boys and everything made sense.

As many people as there are in my age bracket who still love this stuff, I don’t think we’re the audience. I looked over and saw the awe and wonder in their faces as the principles had some huge light saber battle, or when an Imperial ship destroyed an entire planet with one pull of the trigger. Despite the fact that George Lucas should be beyond embarrassed at what has become of his little project, there is an entirely new generation of Star Wars devotees to cultivate, and old people like me can’t do a thing to stop it.

So yeah I can’t wait to get back to work on the Lego set, and you can bet your ass that the old school figures will assume precedence in the Falcon’s cockpit.

Best beer I had this week: I mentioned before that I made a beer run to Copenhagen.

I may or may not have made an international beer run to Denmark for these 12 beauties from @EvilTwinBrewing. No, YOU have issues. pic.twitter.com/elTiYKReBA

I’ve been slowly making my way through them, and the results have been quite positive. The best of the bunch so far has been the collaboration with Shared and Private Press.

The Top 10 Beers I Drank In 2019
Inspired by Untappd's Year In Beer, I look back on ten of the best beers I've had this year.

The Rise of the Online Recommendation Site - The Ringer
When did recommendation sites like the Wirecutter and The Strategist become such a central part of the online economy? And are they changing the way we shop?

The Good, Bad and Ugly of WSU’s final 2019 faceplant