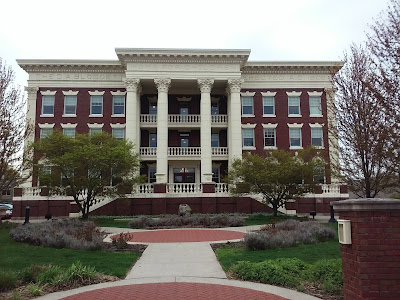 We checked out of our hotel in Grand Rapids and headed to the public library.  As we were leaving the hotel, I walked across the street to photograph this historic site marker, as Grand Rapids was once known as the "Furniture Capital of America."  Several of our ancestors worked in furniture factories in Grand Rapids.

The downtown branch of the Grand Rapids Public Library is a beautiful building. It was built in 1904 as a gift to the city by Martin A. Ryerson.  The library has been in existence since 1871.  In 1967, a wing was added to the back, and in 2001 it was completely renovated.  When I first approached the entrance, I wondered how many of our ancestors had entered this building and enjoyed the pleasure of reading.
We headed to the Grand Rapids History & Special Collections department, which includes genealogical resources, on the fourth floor.  My goal was to locate some newspaper articles about our 3rd-great-grandfather, Charles H. Robbins, a Civil War veteran; an obituary of our 2nd-great-grandmother's sister, Nellie (Ton) Houseman; and some school census records featuring our adoptive great-grandmother Nellie M. Concidine, a school teacher, and our great-grandfather William James Valk and his sisters, Jennie and Gertrude.  While I obviously could spend days or weeks in Special Collections with all our Western Michigan ancestral records, these were a list of items I knew were reasonable to research with the little time we had to spend there.  I had found references to many of these items in the online databases of the Western Michigan Genealogical Society ahead of time.

We had located two of the articles and the obituary by the time my genealogy friend, Chris Korstange, arrived.  This was the first opportunity to meet in real life after being online friends for about 10 years.  Chris and I had connected through the old Random Acts of Genealogical Kindness website when he asked for a lookup to resources I had at my disposal.  In turn, he has done lookups for me at GRPL and local cemeteries. Chris is also a genealogy blogger, and with similar Dutch immigrant ancestry in Grand Rapids, it is pretty likely we will someday find an ancestral connection, either by being related to each other, or discovering our ancestors lived near, worked with, or worshiped with each other.  After a welcoming hug and introducing him to my sister, he helped us by looking up and making scans of the Kent County School Censuses while we finished looking for the rest of the articles.

Chris then drove us through the Heritage Hill Historic District with its grand homes (see what I did there?!) to what had once been the Delos A. Blodgett Home for Children, an orphanage where our paternal grandmother, Jane Marie York/Jeanne Marie Holst and her brother, and our maternal grandfather, William Valk, and his siblings, had once lived for short periods, at different times.
I had done some research in the past year, contacting the D.A. Blodgett - St. Johns non-profit organization to try to obtain records on our York and Valk families.  Although the full records have since been destroyed, I was able to receive scans of the index cards listing our families, with just enough information to confirm some of the theories I had made regarding their stays, as well as new information.  I will be blogging about this at a later time.  My inquiries to ICCF, the organization that currently occupies the Blodgett building, were never answered.  I had hoped to be able to tour the building's interior while we were in Grand Rapids. However, were able to get some good exterior photos.  As we wandered the front courtyard, I thought about the sad circumstances that had brought two of our grandparents and their siblings to this building.  Every family story I have ever heard on both the York and the Valk sides about Blodgett Home had the same theme:  it was not a nice place to be.  Whether it was because of the situations that led to their placement or their treatment while there, or a combination, I could feel the sadness of this place.  And yet, I felt personal gratitude, as well, because despite whatever occurred within these four walls, it was a place that filled a gap in family care that otherwise may have brought on worse trauma than what was already experienced.

Next stop, was Oakhill Cemetery, where our 3rd-great-grandmother, Maria Marina (Van Klinken) Ton Bijl, and very likely her husband Pieter Ton, are buried in unmarked graves in the Potter's Field. Chris helped us to locate the unmarked plot where Maria's brother Johannes "John" Van Klinken was buried. By then, it was starting to rain pretty hard.

Chris returned us to the library parking lot where our rental car had been parked.  There we discovered that we had lost our rental car keys!  At this point, the rain was absolutely pouring down, so after quickly searching Chris' vehicle, the parking lot, the steps of the library, and the courtyard in front of it where we snapped photos, we reentered the library, dripping wet, to see if they had been turned in to the front desk.  They had not.  Our next search was the elevator, Special Collections room, and restrooms.  We quickly determined that they probably had been dropped at the cemetery.  Chris was kind enough to not only take us back out there, but tromp around in the downpour to help us find them.  After about 10 minutes, they were located, and he returned us to our rental car.  Thankfully, he did not need to drive us out to the airport to the rental car office get another set of keys!

After parting ways with Chris, we headed to west of the river to a cafe to dry off and grab a cup of coffee.  After the cloudburst ended, we headed over to the John D. Widdicomb Furniture Factory where our step-great-grandfather, George DeVries, had worked. It's business complex now, but we got some great photos of the four beautiful yellow brick buildings located on both the west and east sides of Seward Avenue, parallel to the railroad tracks.  I could just imagine how noisy and busy it was in its heyday, with the busy railroad bringing in lumber and shipping out completed furniture.

Then we headed west to Coopersville in Ottawa County, where our dad and his siblings grew up. After checking in at our hotel, we met our dad's brother and youngest sister at her place, which just happens to be across the street from the home our grandfather built and where they all grew up.

While visiting with them, sharing photos with each other of our of children and grandchildren and looking at old family photos, I held my own little Scanfest on my Flip-Pal scanner, scanning our Robbins great-grandparents' little memo book from 1938.  I also took this photo of Aunt Jo's artwork.  Josephine Rebecca (Huff) Robbins was married to our Great-grandfather Robbins' brother Lloyd.  She was the Robbins family genealogist for many years before she passed away in 1987.  I had forgotten that she was also interested in art. 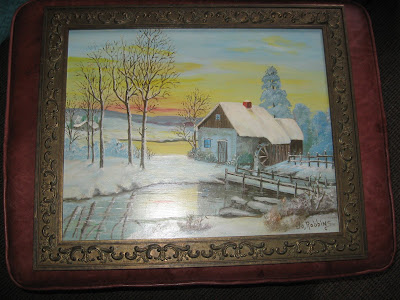 After a long, full, busy day, we crashed in our hotel room.  More adventures awaited us the next day!