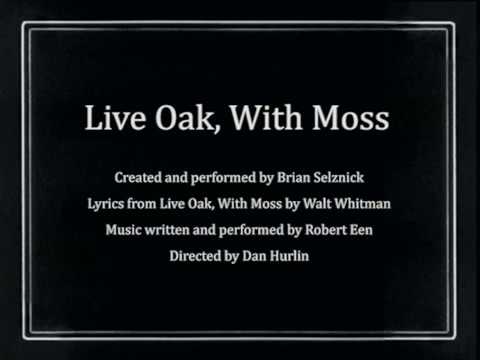 Live Oak, With Moss: Selznick and Whitman (and Sendak?) Together At Last

Sometimes what people don’t do can be as interesting as what they do do. Consider the case of one Maurice Sendak. If you have read Wild Things: Acts of Mischief in Children’s Literature then you would have run across a true story of a time when Sendak almost illustrated The Hobbit. Indeed, if it hadn’t been for a labeling mix-up, the job probably would have gone through. Not every project Sendak considered worked out. And though he accomplished a great deal in his lifetime, he also had no difficulty saying no when the time came.

Once upon a time Maurice Sendak met Brian Selznick and a friendship was born. In many ways, Selznick and Sendak had much in common. Cross-hatching is not unknown in their works. Pushing literary boundaries, a fascination with live theater, even the fact that they were both gay could serve as common ground between artists. Of course, what Selznick and Sendak really had in common, though, was the fact that not only were they willing to redefine what a “picture book” was and could be, but they were unafraid of working in the creative world of adults. Sendak spent a great deal of time designing sets of operas, and illustrating wild, strange books for adults. Selznick has had his puppet shows, his work with the cinematic adaptations of his books, and, now, this. Live Oak, With Moss.

As Selznick tells it, it was Sendak who introduced him to Walt Whitman’s famous, lost poem. He says:

“Maurice told me an incredible story about a sequence of poems Whitman had written about a love affair he had with another man that he never published. Instead he cut up the poems, rearranged them, and hid them in Leaves of Grass. The poetry sequence remained secret for a hundred years until it was discovered, pieced back together, and named Live Oak, with Moss.”

Indeed, in 2009 Selznick even created a puppet show of the poem. You can actually see the recording of the show here:

The kicker is that Sendak couldn’t for the life of him figure out how you’d go about illustrating such a poem. And, for Selznick, the challenge was there. “… how could I illustrate poems when Maurice Sendak himself had said poems should not be illustrated?”

The answer is an exceedingly handsome book, released by Abrams this past April for the adult market. Golden edges. Thick, creamy pages. And inside the average lay reader could mistakenly believe they were encountering the latest Selznick children’s book. As with Hugo Cabret, Wonderstruck, and The Marvels, Selznick is unafraid to embrace the cinematic potential of the page. The first chunk of the book is not an illustration of Whitman’s verse per se, but, as Selznick puts it, “a framework, or a lens, through which they can be discovered.”

I have worked, these past four years or so, as an adult selector for a library in the Midwest. Though my specialty is children’s, I have in this time received a crash course in the world of adult publishing. And what I have discovered in that time is that when it comes to taking risks, defying convention, playing with form, and mixing and melding different types of books together, the world of children’s book publishing does it better. So much better. As far as I can tell, the adult publishing sphere has absolutely no idea what to make of a book like Live Oak, With Moss. Labeled “Poetry” by Baker & Taylor, this book is neither comic nor illustrated novel. To read it, however, you must be comfortable with sequential visual narratives, even if those narratives aren’t telling you a “story” in the conventional sense.

Reading this book, what becomes eminently clear is that Selznick is laying the groundwork for GLBTQIA+ literary history, particularly as it pertains to Whitman. How well known is the story behind this poem? When people think of Whitman they might know that he was gay, but when you read what he’s put together here you are left in awe of the sheer guts it would have taken to put pen to paper and say any of this. To put it all into context, Karen Karbiener, an internationally recognized scholar of Walt Whitman who teaches at New York University, gives scholarly commentary at the book’s end. And you know how much I love backmatter.

As my blog is normally concerned only with the trappings of children’s books and the like, allow me to reiterate now that this book is squarely for the adult set. Selznick’s art here displays the intimacy between two male bodies, suggesting more in tight glimpses than most artists could do with true full-frontal nudity (though there are a couple of those here too). This book is wildly adult. At the same time, I think it safe to point out that it could not have come to fruition had it not some connection to children’s book artists and the freedom with which they approach a project of this sort.

If, by this point, you are curious to learn even more about Mr. Selznick’s work on this book, the reasons why he made the choices that he did, and even what some of the scholarship says about this title, then you are in luck. As it just so happens, on June 6th both Brian and Karen will be at Greenpoint Books in Fort Greene:
https://www.greenlightbookstore.com/event/brian-selznick-karen-karbiener

And on June 11th they will have an event at the Brooklyn Historical Society:

Can’t make it to NYC? Then I highly recommend seeing the book for yourself. No Selznick completist (or Whitman completist, for that matter) can call themselves such without reading it. Beautiful to its core.

Live Oak, With Moss: Selznick and Whitman (and Sendak?) Together At Last