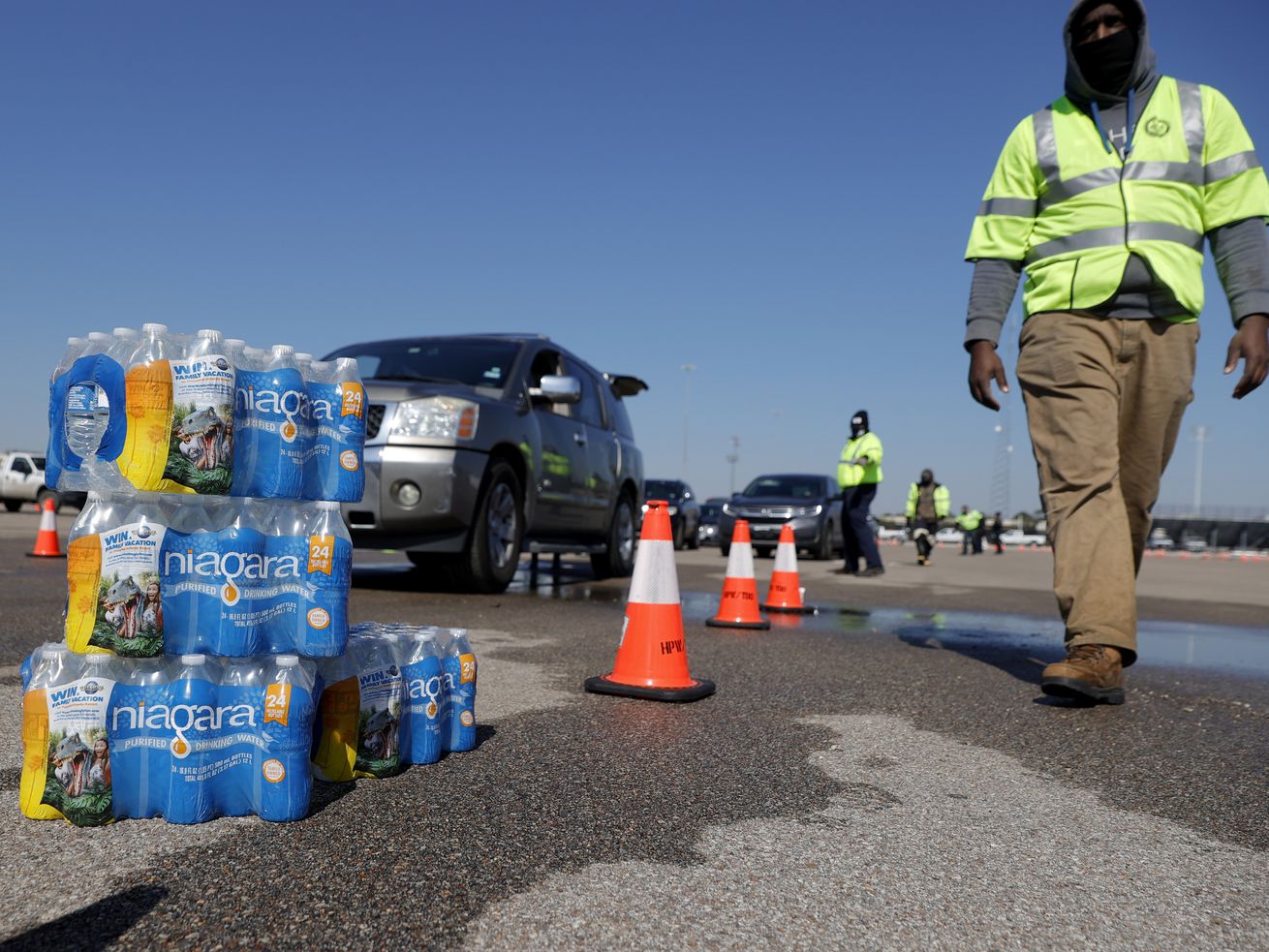 Millions of Texans are under “boil water” orders after a winter storm.

In the wake of a catastrophic winter storm this week, much of Texas has finally regained power — but residents are still facing major challenges, including dire water shortages.

On Friday, the Electric Reliability Council of Texas (ERCOT), which oversees much of the state’s power grid, ended emergency conditions and returned to normal operation. Previously, soaring demand for power and frozen natural gas pipelines, among other factors, meant that millions of Texas residents were without power and facing widespread rolling blackouts in freezing weather.

Though the situation has improved dramatically from earlier in the week, tens of thousands of Texans — about 58,000, as of late Saturday afternoon — remain without power, according to PowerOutage.us.

That may not be the worst of Texas’s troubles, though: As of Saturday, some 7 million people in Texas are under “boil water” orders, according to the AP, and at least one person has died because of water pressure issues at an Abilene, Texas medical facility.

In total, more than 14.9 million Texans have been affected by disruptions to water systems across the state, Texas Commission on Environmental Quality spokesperson Tiffany Young told CNN Friday.

This map shows how the water system is currently performing. Each zone is an area experiencing outages (red) or low pressure (orange). The goal is for each zone to get to green again, where the system is operating normally & the boil water notice can be lifted. pic.twitter.com/KFtkWMg1fA

Other southern states, including parts of Tennessee and Mississippi, are facing similar problems, affecting hundreds of thousands of people.

The severe cold — temperatures plunged to well below freezing in parts of Texas earlier this week — means that pipes have frozen and burst in some places. Water pressure has also dropped precipitously as many Texans drip their faucets to keep water flowing and prevent freezing.

: A Texas resident found their SUV frozen in ice after pipes burst inside a Galveston parking lot during devastating winter storm. https://t.co/CvNUdSWNgr pic.twitter.com/1xV1RIkoY5

It’s left the state on disaster footing as it struggles to respond to what Austin City Council member Natasha Harper-Madison described as “a Katrina-scale crisis” in an interview with NPR Friday.

Burst pipes and flooding have rendered some Texans’ homes uninhabitable, and the coronavirus pandemic has added another layer of difficulty to the situation, as uncertain conditions in shelters and hotels — as well as an inability to wash hands and masks in hot water — puts people at increased risk of infection.

As Krystal Foreman, a Texas resident whose home flooded and lost heat earlier this week, put it in an interview with the Guardian: “Do I want to risk exposing us to Covid, or do I want to just wait for the ceiling to cave in?”

Water issues in Texas don’t stop there either. Millions who do have water are under “boil water” warnings — meaning their water isn’t safe to drink without boiling first — and some Texans are also melting snow to meet their water needs. In at least one city — Kyle, Texas, near Austin — officials earlier this week asked residents to stop using water except to “sustain life.”

“We are close to running out of water supply in Kyle,” the city said, according to the New York Times.

Texas residents are also suffering from food shortages because of the storm. Winter weather has crippled supply chains, food is spoiling without power, and grocery stores have been unable to restock, according to the Texas Tribune.

Adding a visual aid to the texts from Texas thread. An HEB (grocery store) in Austin pic.twitter.com/0XoCJ8Wizj

This week’s food shortages are also part of a compounding crisis, as KXAN News executive producer Wes Wilson pointed out on Twitter on Wednesday.

“Food security was already a problem due to COVID and those mass distributions aren’t happening,” he tweeted.

1. Grocery stores either aren’t open or have been picked clean. They also have problems getting more food.
2. Most restaurants are closed.
3. Power outages spoiled many people’s food
4. Food security was already a problem due to COVID and those mass distributions aren’t happening

Some food banks were unable to distribute food because of the weather earlier this week, and now they are bracing for a surge in demand.

“This is a disaster,” North Texas Food Bank director of government relations Valerie Hawthorne told the Guardian Friday. “We are doing rapid needs assessments so we can get appropriate food to those people quickly. When everything thaws, we’re preparing for a massive spike in demand. This has been the longest week of all our lives.”

Federal help is on the way

As Texas struggles to respond to the scale of the crisis, supplies and emergency relief are already on the way from the Federal Emergency Management Agency.

As of Thursday, the agency had delivered more than 700,000 liters of drinking water to the state, as well as blankets, generators, and food.

And more help is expected: President Joe Biden approved a major disaster declaration for the state on Saturday, freeing up even more federal aid.

“As I said when I ran, I’m going to be a president for all America,” Biden said Friday. “There’s no red or blue.”

Last Sunday, Biden approved an emergency declaration for the state, authorizing FEMA to “identify, mobilize, and provide at its discretion, equipment and resources necessary to alleviate the impacts of the emergency.”

A federal emergency declaration is helpful to states, but the total amount of federal assistance it brings is capped at $5 million. The president signing a major emergency declaration expands the type of assistance the federal government can provide to states suffering through the effects of a natural disaster. It authorizes assistance both to individuals impacted as well as state and local governments for emergency work and repairing damaged facilities. It also unlocks hazard mitigation assistance, getting additional funding to states, municipalities, and nonprofits working to save impacted the lives and property of impacted residents.

Biden is expected to visit the state in the near future, according to the Texas Tribune, though there has been no specific date set.

In addition to FEMA’s efforts, charities and aid organizations are stepping up to help Texans. Groups like World Central Kitchen are providing food, and New York Rep. Alexandria Ocasio-Cortez has helped raise millions of dollars for Texas charities.

Thank you to @chefjoseandres and @WCKitchen for partnering with @COSAGOV — and helping to deliver a hot meal to residents on the westside of San Antonio.

Your generosity will not be forgotten. https://t.co/cvlvdJ4mA9

Beto O’Rourke, a former Texas representative and onetime Democratic Senate and presidential candidate, has also drawn on his organization in the state to coordinate a phone bank, which has contacted hundreds of thousands of senior citizens in Texas to “connect them with water, food, transportation, and shelter” during the crisis.

For Texas residents in need and those elsewhere in the US who are looking for a way to help, the Texas Tribune has collected a list of statewide and local resources and charities providing food, a place to get warm, and other disaster aid.