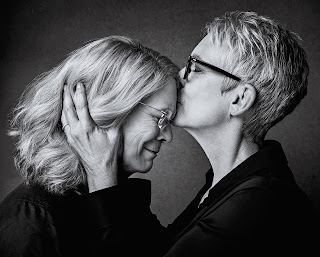 Will the “Better” Laurie Strode Please Stand Up? 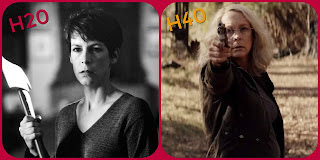 I read this recent piece at Spinsters of Horror with great interest. The writer fashions an excellent comparative analysis of the Laurie Strode character as depicted in H20 and H40, respectively. There are some spot-on observations and she makes a compelling case why the H20 version of the character may be "better" than the H40 version. I encourage anyone with an interest in the Halloweenfranchise and, particularly, its enduring final girl to read this. It’s really quite good and got me thinking, which is what all great writing should do.

The fact that the writer herself grapples with PTSD every day, though, both strengthens and weakens her argument. She's approaching the character with a very specific first-hand experience (aka bias) and reaction to that experience that is both personal and necessary to her ability to function in the everyday world. She sees the H20 version of Laurie as more relatable to her own experiential survival—a projection or manifestation of the manner in which she's been able to function.

But because she sees so much of herself represented in H20 Laurie, I feel her argument loses some of its steam when she attempts to dissect the H40 version of Laurie. For the writer, hope is an essential element to a successful recovery. In the H40 version of the character, she is dismayed that what she sees as the character's hopeless representation "does not leave us survivors of trauma a positive representation of recovery." Herein lies my criticism of her argument: Not every survivor of a traumatic event comes out the other side intact or with the ability to heal. Some victims of trauma are left broken. The H40 version of Laurie opts to explore that.

H20 Laurie is a very realistic portrayal to the writer because that character's story arc is largely how she struggles with her own PTSD. But that doesn't make the H40 Laurie any less realistic. It's simply a different depiction of the same character who suffers the same traumatic event but comes through it with markedly different outcomes. While H20 Laurie may represent hope, H40 Laurie should elicit empathy. Sometimes, for some people, there is no coming back from a traumatic event. There is no one prescription for successfully coping with PTSD because "success" is a relative term and will vary based on many factors—the degree of trauma, the victim's pre-trauma psychological health, the victim's support system, the immediacy and quality of the victim's after-care, etcetera.

I'd counter-argue that H20 and H40 give us two differing versions of the aftermath of trauma—both engendering varying degrees of generational trauma in the process—with two victims who have found a way to continue on and achieve freedom in their post-trauma lives. For one, as the writer points out, there is an effort to move beyond her past and build a life for herself; for the other, there is no moving beyond her past and a consumption to prepare and protect herself and those she loves from a never-ending threat. For one, there is hope; for the other, there is only survival.

Both have chosen the flight and fight responses—they just vary in terms of what they're fleeing from and fighting for. H20 Laurie is fighting to return to a place of normalcy by (literally) fleeing from her past, whereas H40 Laurie is fighting for a physical survival she sees as forever threatened and (metaphorically) fleeing from her past by avoiding any pretense that her life could ever be normal again. But whereas the degree of freedom from the past H20 Laurie achieves through flight may seem more obvious and comforting to our own ideas of the concept, I'd argue that H40 Laurie also finds her own version of freedom through her fight instinct. For her, the hypervigilance of her physical barricades, sharpshooting, and methodical planning gives her reprieve from the feelings of helplessness she experienced during and after the events of Halloween, 1978. She achieves a degree of freedom from what she's come to regard as a weaker version of herself. Isn't this also a personal evolution in the wake of trauma?

One could also argue that the H40 Laurie may ultimately fare better than H20 Laurie because the former chooses to confront the reality of the present-day embodiment of her past in contrast to the latter who chooses to run, hide, and create a new reality through avoidance of the past. One stands ready, prepared to confront and—ultimately, hopefully—defeat the past; the other playacts through a façade that barely achieves a sustainable false sense of security. One is looking right through the barrel of a shotgun; the other is looking over her shoulder.

Quality of life arguments notwithstanding, while we might more readily find hope in one version's depiction of the character, we should have great empathy for the other version's depiction of the character. All victims of trauma find their own path through their unique experience and none should be judged in subjective terms of success or failure. Ultimately, both types of survivor should be appreciated for the same thing—their endurance.

Will the “Better” Laurie Strode Please Stand Up?