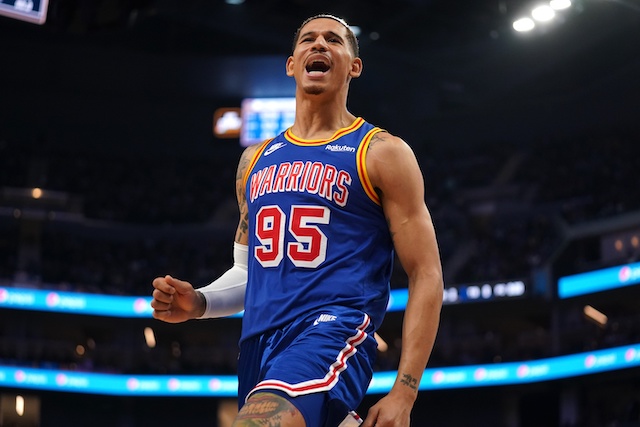 The Los Angeles Lakers have been active less than two hours into free agency. In need of 3-and-D wing players, the Purple and Gold have settled on two guards so far — Lonnie Walker IV and Troy Brown Jr. and a familiar face — Damian Jones.

Walker, who is a career 34.3% shooter from deep, signed a one-year, $6 million contract with the Purple and Gold. Brown and Jones signed veteran minimum deals. Jones returns to the Lakers on a two-year deal after a season away from L.A.

The Lakers, though, have finally found their first wing defender. NBA Champion Juan Toscano-Anderson will leave Golden State for the Lakers, according to Chris Haynes of Yahoo Sports:

He fits the build as a player who will bring effort on defense. He’s also on the younger side — a stark contrast from the Lakers’ free agent moves the last offseason. However, he isn’t a threat from beyond the arc which could hurt the Lakers in his limited minutes.

Toscano-Anderson emerged as a high-energy player for the Warriors, averaging 20.9 minutes in his first two seasons. His playing time dipped to 13 minutes per game and he fell out of the playoff rotation.

The 6-foot-6 forward averaged 4.1 points and 2.4 rebounds per game last season on nearly 50% shooting from the field, but just 32% shooting from three. He’ll likely settle in as a rotational player prepared to hustle.

After signing Jones, the Lakers quickly brought Walker IV on board with their midlevel exception.