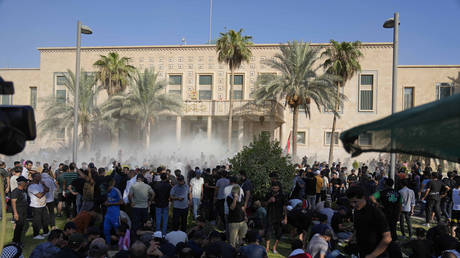 The Iranian government has decided to close the country’s border with Iraq on Monday in response to violent clashes in Baghdad. Dozens of people have been injured and killed in clashes between the followers of Iraqi cleric Muqtada al-Sadr, rival militias and security forces, triggered by a political deadlock.

The land border crossings to Iraq will remain closed until further notice, Iran's Deputy Interior Minister Majid Mirahmadi told the Mehr News Agency on Monday evening, adding that the decision was made due to unrest in Iraq and to ensure the safety of Iranian pilgrims. Tehran International airport also announced that all flights to Baghdad have been canceled.

Iran’s Embassy in Baghdad has asked Iranian nationals currently in Iraq to avoid traveling to the country’s capital, as well as the cities of Kadhimiya and Samarra, and to observe the curfew declared by Iraqi authorities earlier Monday.

Turkey later issued a travel alert of its own, calling on citizens to avoid Baghdad while voicing hopes that negotiations would resolve the unrest.

“Turkey is concerned about the developments in brotherly Iraq. We hope that current political conflicts will be resolved peacefully and through inclusive dialogue, and the peace and well-being of the Iraqi people will be ensured,” Ankara’s foreign ministry said in a statement.

Clashes between security forces and supporters of influential Shi’ite cleric Muqtada al-Sadr erupted in Baghdad on Monday after al-Sadr announced he was quitting politics for good after months of failed attempts to form a government in the face of opposition from rival factions.

Hundreds of protesters have stormed Baghdad’s fortified Green Zone, which houses the presidential palace as well as the US and other foreign embassies. The caretaker government of Iraqi Prime Minister Mustafa al-Kadhimi responded by deploying tanks and armored vehicles around the Green Zone and declaring a curfew effective 3:30pm local time, later extended nationwide.