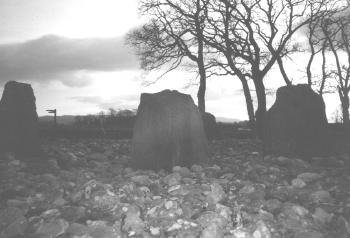 The Kilmartin Glen contained an impressive collection of neolithic sites. The richest cluster in the valley included Temple Wood Henge and the various Nether Largie artifacts. Conveniently they all sat within close proximity of each other (map).

A circular structure set off from the surrounding landscape by an earthwork forms a henge. Stones or other objects set inside often accompany the structure. Undoubtedly, Stonehenge in Wiltshire, England serves as the premier example. However there are many others including this well-defined circle at Temple Wood.

The Temple Wood name came from trees planted around the circles in the 19th Century. Thus the name had no real connection to the origin of the site, although it needed one apparently so it stuck. The southern circle, depicted above, contained 13 free-standing stones. Ancient builders configured the stones in a concentric ring about 12 metres across within the larger henge. Then they buried their deceased dignitaries within that central spot. Researchers think this ancient cemetery may have existed for as long as 5,000 years.

An alternate name for Temple Wood is Half Moon Wood.

The Nether Largie Cairns stood just a couple of hundred yards away. A cairn is simply a pile of stones and they are quite common in Kilmartin. For the obvious reasons, modern observers designated the three cairns here as Nether Largie North, Mid and South.

This photograph shows Nether Largie South. It served as a burial site — probably for local rulers or chieftains — within an internal chamber. Once fully covered, it now lies exposed. For construction, prehistoric builders used different types of stones in their Nether Largie designs. Flat, rectangular stones became roof supports over chambers. Smaller, rounded rocks covered the entire circular site in a protective layer. The site probably dates back 5,000 or 6,000 years.

The standing stones accompanying the Nether Largie site formed into a shape similar to an outstretched X, with larger stones at the four tips and at the centre. The sun sank low on the horizon as I surveyed the site. Then a darkening scene created an eerie mood. Photography became difficult with my unsophisticated camera as the sunlight dimmed. So it was time to declare this adventure finished and depart the glen for another expedition.

This photograph shows one of the northern stones and it’s about three metres tall with a distinctive notch on its upper third. Most of the stones also have multiple cup marks carved into them. Thus it is apparent that prehistoric people expended great effort to deliberately mark and placed these stones in precise formations.

There are many theories that attempt to explain the placement of Nether Largie Standing Stones. Researchers speculate that Nether Largie may have served as a neolithic lunar observatory. Seemingly, the phases and positioning of the moon conveyed great meaning to local inhabitants five millennia ago. The moon’s northernmost, southernmost, midwinter and midsummer positions all aligned with arms of the structure and various points on the landscape horizon.

Additionally, the structure may have been able to indicate even more infrequent occurrences. One example might be lunar major standstills that take place about once every nineteen years. This is the time of the Moon’s maximum range of declination, when it appears to move in its most extreme positions from high to low in the sky over a two week period. This would have been a truly remarkable observation and a complicated measurement for Bronze Age people.

Articles from the January 2000 Scotland Trip