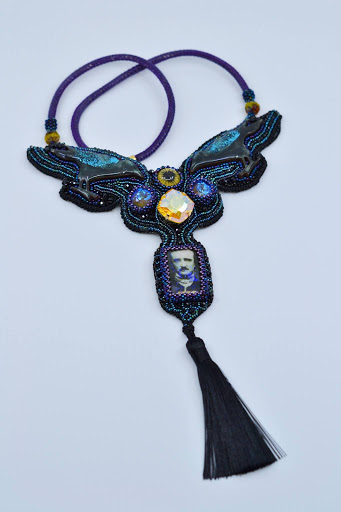 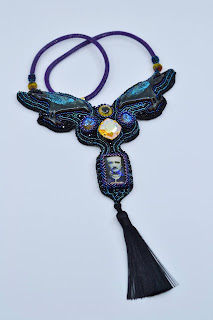 Nevermore was created as a special project for my  beady friends who come to take my classes in record breaking numbers year after year at Bead Soup. Bead Soup is a lovely bead store located in the Baltimore area. Last year I made these fine beady friends Baltimore blue crabs that came in blue boy and Old Bay Seasoning colorway. For this July's classes a Poe themed piece was in order. It's not an easy task to construct a bead embroidered raven. Black is black and without contrast, the outcome can be a fine piece in person and a hell of a thing to take pictures of. Like black dogs, black beadwork is the hardest to photograph. 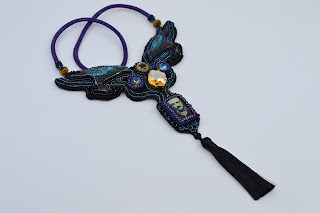 Of course one still needs to consider wearability and innovation. If I just stick with the same approach year after year and do the same thing that we have done with the crab, but make a raven, that would get boring. So I was going to stray from a figurative representation and chose a more symbolic approach. The laser cut wood ravens and photograph of Poe I have painstakingly covered in glow in the dark paint that only shows in the dark, added glitter and about five layers of resin on each piece. 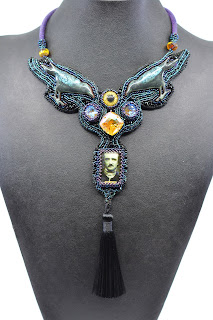 I added a taxidermy eye that is very much like a raven's eye to be the center of the composition, and used the same glittery blues that I applied to the raven's wing throughout the project. Think light catching raven wing's that looks bluish black. Combine this with matte and shiny blacks, purple and yellow. That's the limited palette I chose for this piece. As to the shape; I was going for movement of wings. So much so that the first time you see this piece, the portion left and right of the eyeball should appear to be wings in flight. The direction of my beadwork emphasizes this movement. Upon closer inspection you will see the two ravens facing each other, but first they appear to be stylized wings in flight.  The tassel at the bottom of the necklace adds more movement too and its jet black brings the blues and purples into balance. 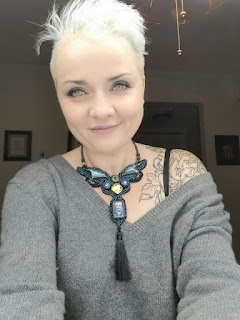 Here is how it fits on me. My neck is 14 inches wide, the necklace of course can be made much bigger and somewhat smaller too just by sizing the leather cord different. I did not want to make it heavier feeling by the addition of beads on the rope portion, hence I kept it easy peasy, simple and relatively light feeling to support the feeling of flight the rest of the composition takes on. 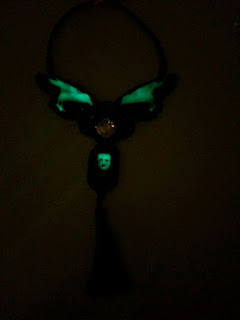 Here is Poe's skull and the tow ravens glowing in the dark. The glow in the dark paint does show up, but of course you have to charge it under a light first. Still; it's an unexpected nifty touch, I think.
Source: crimsonfrogdesigns