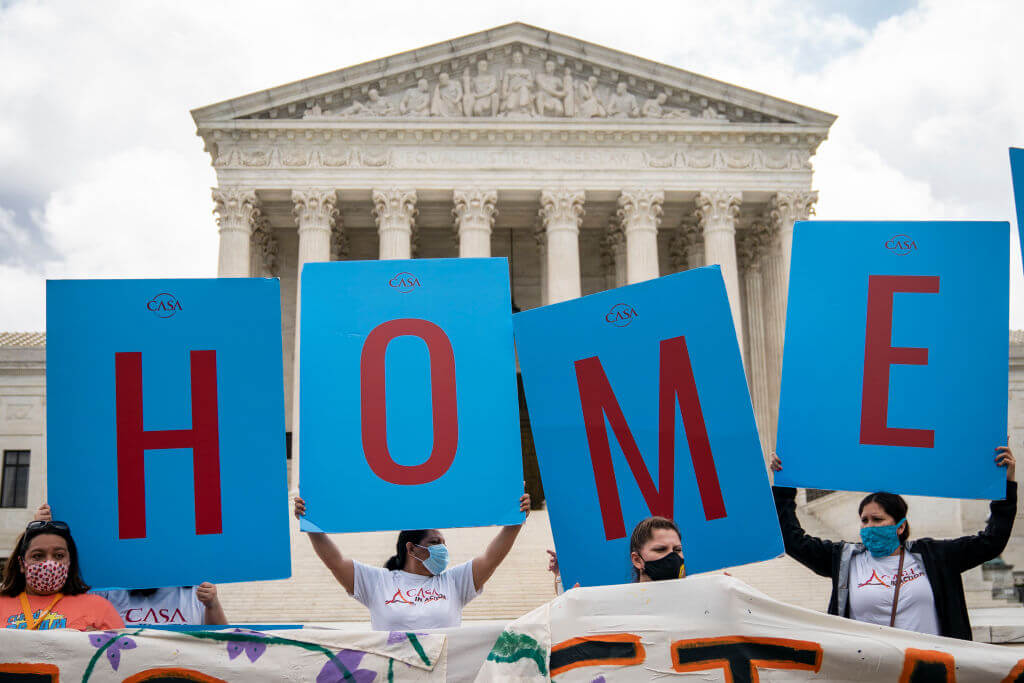 WASHINGTON — Legislation creating a path to citizenship for undocumented people brought to the U.S. as children faces a new border crisis and old partisan objections, diminishing the chances it will become law despite full Democratic control of Congress and the White House.

On Thursday, the U.S. House is poised to pass the American Dream and Promise Act, House Democrats’ version of the so-called DREAM Act.

It would provide a route to naturalized citizenship for the more than 700,000 residents shielded from deportation by the Deferred Action for Childhood Arrivals program. The bill also includes access to legally protected statuses for millions more immigrants, including those with Temporary Protected Status, or TPS, designations.

Yet this measure, or indeed anything touching on the issue of immigration, will have trouble clearing the U.S. Senate, where filibuster rules mean most bills must gain the support of 60 senators to advance rather than a simple majority.

Arizona Sen. Kyrsten Sinema, a Democrat elected in 2018 who pledged to transcend partisan fights, is one of two Senate Democrats who have publicly said they have no intention of eliminating the filibuster. The other is West Virginia Sen. Joe Manchin.

Passing the DREAM Act became harder this week as Republicans ramped up their anti-immigration messaging amid a surge of migrant children crossing the border.

While the largest numbers of those enrolled in DACA live in California, Illinois and Texas, they are scattered across the nation. Some states with large numbers of DACA recipients include Florida, Colorado, Georgia, North Carolina, Nevada and Arizona, according to data from the U.S. Citizenship and Immigration Services and the 2016 Census.

An estimated 24,000 Arizonans are protected by DACA.

The Dreamers’ fate in the House is not in question. A nearly identical bill passed in 2019 with unanimous support from Democrats and a handful of moderate Republicans.

Another measure the House is also expected to pass would offer green cards to farmworkers who don’t have legal status, and that bill has 11 Republican cosponsors.

Both measures easily cleared a procedural hurdle Tuesday by advancing on a party-line vote in the House Rules Committee ahead of the debate on the House floor on Thursday.

Problems in the Senate

Although the Biden administration has released a comprehensive immigration plan, the White House has indicated it would also be open to piecemeal legislation on the subject.

However, Democrats in the Senate, with their fledgling and razor thin majority, do not seem to have decided whether they would rather move scattershot bills taking on aspects of the immigration system or try again for comprehensive legislation.

Either path is complicated.

U.S. Sen. Dick Durbin of Illinois, who authored the DREAM Act that came five votes short of passage a decade ago, told reporters this week that bills addressing the status of Dreamers and farmworkers likely wouldn’t see action on his side of the Capitol until April at the earliest.

A comprehensive bill, meanwhile, would stand little chance of passing because of filibuster rules and other complicating factors, predicted Durbin, a member of Democratic leadership who also chairs the Judiciary Committee. He was a member of the so-called “Gang of Eight” group that attempted comprehensive immigration reform in 2013.

On the other hand, U.S. Sen. Bob Menendez, a New Jersey Democrat who was a member of the same gang, has sponsored a comprehensive bill in the image of Biden’s proposal this year.

He told reporters he has no interest in giving up before at least trying to pass it. He said he’s studying using the same procedural tactics to pass immigration legislation that the Senate used to pass a recent pandemic aid bill: the budget reconciliation process, which would mean Democrats could clear a bill without needing a single Republican vote.

With Democratic leaders already signaling that they’ll fire up the reconciliation process to pass an infrastructure investment bill, some Democrats have been pushing for at least the legislation conferring legal status to Dreamers to be tacked onto that measure.

Of course, that may not be necessary if Democrats change the filibuster rules.

Biden on Tuesday night endorsed a move to a so-called “talking filibuster,” meaning a senator or a group of senators objecting to legislation would have to physically stand on the Senate floor and speak for hours to block debate.

Yet it’s not clear either strategy would fly with moderate Senate Democrats, who would be key to passing anything whether by 50 votes or 60.

Sen. Jon Tester of Montana, for instance, told reporters Tuesday he’d rather see a large bill pass, while Sen. Joe Manchin of West Virginia said the 2013 framework pairing a pathway to citizenship with border security spending should serve as the blueprint.

Several senators have said they don’t want to undo the filibuster.

There is also the political reality that moving on any individual immigration issue tends to open up questions about other parts of an interconnected system.

Sen. Marco Rubio, a Florida Republican, had been a champion for a Dreamer bill years ago, but said it would be hard to pass a bill like this by itself this year.

“The problem’s not the Dreamers part,” Rubio told reporters on Tuesday. “The problem is … it becomes a magnet for all these other things that people want. None of these bills can stand on their own because everyone uses it as a vehicle to throw all their other stuff on it.”

Indeed, Sen. Lindsey Graham of South Carolina, Durbin’s Republican counterpart on the Judiciary Committee, told reporters Tuesday that in his view that any Dreamer bill would have to also include something to “disincentivize” illegal border crossing.

“You’ve got to marry it up with some border security provisions,” he said, broadening that assessment to a comprehensive bill as well. “I think it’s going to be really hard to get a bipartisan bill put together on anything that has a legalization component until you stop the flow.”

That message rings especially true as Republicans have intensified their border messaging, amid a surge of children crossing the Southern border into the United States.

Republicans in the House Rules Committee on Tuesday said that passing a bill giving citizenship to anyone without also upping resources to secure the border would just attract more migrants. That was a continuation of the message shared last week by U.S. House Minority Leader Kevin McCarthy of California, who traveled with a delegation of Republicans to the border.

Rep. Mariannette Miller Meeks of Iowa, who accompanied him, chided Biden at a press conference there for creating “disorder at the border through executive order” — a reference to Biden’s executive actions protecting certain immigrants from deportation, which Republicans say is the equivalent of a wink and a nod for people who would cross the Southern border illegally.

Rep. Clay Higgins, a Louisiana Republican, said during the press conference at the border that the surge in migrants is directly tied to Biden’s immigration rhetoric — rhetoric Republicans have no interest in turning into law.

“It began last year when then-candidate Biden continuously messaged that he was going to weaken law enforcement missions on the border and stop construction of the wall, create a pathway to citizenship, or amnesty for illegal residents that were already here,” Higgins said. “The cartels were listening.”

Meanwhile, the U.S. Conference of Mayors on Wednesday sent a letter to the House urging passage of the Dreamers bill, saying many Dreamers are essential workers fighting on the front lines of the pandemic.

“The United States Conference of Mayors has had strong policy supporting permanent legal status for Dreamers and extension of the DACA program for many years,” the mayors wrote. “Our bipartisan organization has adopted this policy because it is the right thing to do – for Dreamers, for our communities and for our country. “