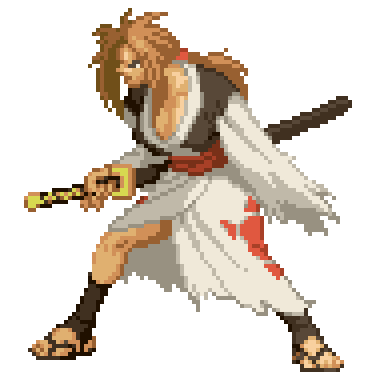 There's a few different ways to become a Slayer.

One way is to cut out your own eye, put in in the hand of Zotzi the Slayer, and tell her that you want to train under her.

Another way is to join the Doomblades or to pry a doomblade from the bloodyfist of a Doomblade that you defeated in single combat.  (The two actions are equivalent.)

A third way is to get your hands on a chainsaw or two.

This is a GLOG class, cut from the same cloth as Goblin Guts v2.

After tasting fresh blood, you learn the creature’s physical weaknesses and can track them like a bloodhound.  After hitting someone with a bladed weapon, you can lick blood off your sword as a free action.

If you have all 4 Slayer templates, you can even learn their psychological weaknesses as well. (As a result, getting punched in the mouth tends to make you a bit philosophical.)

Whenever you get a melee killing blow on a challenging foe, you can make another melee attack.

Whenever you get the killing blow on a creature, you immediately heal 1d6 for every 2 Levels of the creature killed.  If the creature had any special abilities, the doomblade absorbs the ability, and is able to cast the ability once.

Whenever you get the killing blow on a challenging foe, you gain EXP (Execution Points) equal to its level.  The more EXP you get, the better you can survive the furious exchanges of violence that punctuate your daily life. Whenever you kill something, make a note of it in your legendarium under a new section titled THE WEAK AND UNWORTHY alongside it's EXP.

Whenever you kill something in a 1-vs-1 duel, you get twice as much EXP as normal, and you get to put a little "W" next to its entry in THE WEAK AND UNWORTHY.

If you ever die from damage incurred during the use of your Murder ability, you have a chance to survive.  The round after you die, roll a d6.  If you are lucky, you wake back up.  You’re missing another tooth and there is so much blood in your eyes that you can barely see.  You have half of your HP back.  You love this shit.

Whenever this ability triggers, you are able to stand up and move in the same turn as long as you make a melee attack against something at the end of it.

When only half of your party shows up for today’s session, you can attempt a speedrun of a previously completed dungeon.  The DM will show them the map (but no other features of the dungeon), and the party can start with 3 scrolls of their choice, and as much basic adventuring gear as they want.  Every single inventory item that they walk into the dungeon with will add 5 minutes to their final game time.  Treasures/Allies level up two people instead of one.

The dungeon is reset, and the goal is to complete the dungeon as fast as possible, both in-game time and IRL time.

If your DM wants to allow quicksaving before you jump into a boss room, just make a photocopy of your character sheets and set it aside.

If you ever do this for one of my dungeons, post it on the page.  (# of players, scroll choices, # of quickloads, game time, and IRL time).