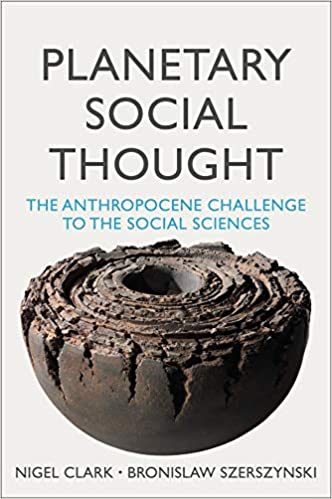 Reading Nigel Clark and Bron Szerszynski’s just published Planetary Social Thought: The Anthropocene Challenge to the Social Sciences is helping me think through what I see as perhaps the key philosophical debate of the current time. That debate is over the “ontological politics” of the difference between science in its theory and practice — including the sciences of climate change, of ecological systems, of viruses, evolution, geology, and more — and colonial/capitalist modernity’s most direct victims: the knowledges and lifeways of indigenous and place-based cultures.

This debate has a more general antecedent, which is the debate over the proper relationship between science and religion. Science tells us certain things, religion(s) tell(s) us very different kinds of things, so how do we make sense of those differences?

The debate I have in mind is more specific than that, for several reasons: because indigenous religion is not just any kind of religion; because it isn’t just about “religion,” but about reality (though in some sense the science-religion debate has always been about reality); because the science we’re concerned with is more specific (and more specifically institutionalized) today; and because this debate comes with an understanding of the political economy/ecology of the last five centuries that the broader debate has generally lacked.

Science as we know it emerged as part of an interconnected set of political, economic, epistemological, and cultural processes that were colonialist, modernist, and dramatic in their impacts on the Americas, Australia, and most of Africa and Asia. The human communities hardest hit by those processes were indigenous, “traditional,” “land-based,” “tribal,” or something of that sort. To be more precise, they were the ones that maintained ontological relationships with land that put them into opposition with the geontological project of colonial/capitalist modernity — the project of turning land into resource and commodity. (Note that I’m using that term a little differently from Elizabeth Povinelli’s use of it, albeit informed by that use.) The “Anthropocene predicament” that we are living out today involves facing the result of those impacts.

In both of these “debates” — science versus religion, and science versus indigenous lifeways — denying the validity and usefulness of either term is no longer philosophically defensible (if it ever was). Figuring out a workable relationship between them is necessary.

There are many positions in this debate. There are of course the closed-minded, monological extremes, which take one worldview (science, for instance, or Evangelical Christianity, or whatever) to be correct and the others to be wrong. We can dispense with these on the grounds that they are non-starters for any kind of respectful co-existence. In the past, scientific modernism may have gotten away with murder, so to speak, because of its alliance with colonialism, capitalism, and all the rest. Today it cannot.

Among the most popular onto-epistemological pluralisms these days are the “many worlds” or “pluriversalist” perspectives articulated by ontological and decolonial anthropologists like Arturo Escobar, Mario Blaser, and Marisol de la Cadena, and the “cosmopolitical” and “multinaturalist” perspectives of Isabelle Stengers, Eduardo Viveiros de Castro, Bruno Latour, and Philippe Descola. While there are differences between them (see here, here, and here), these various approaches are, at the very least, allied, with the main differences between them concerning questions of what is comparable across “worlds” and what isn’t, what’s at stake, and how best to navigate the ineradicable gaps that separate them (with politics a necessary part of that question).

I’ve wrangled with these questions for years now and continue to do so. On the surface, a process-relational approach would seem to favor a mix of pragmatism and some sort of phenomenological enactivism (and perhaps a critical realism) — that is, an approach that assumes that there is a shared universe but that the “proof” of any particular articulation of it is “in the pudding.”

But the pudding today is complicated. Science is obviously highly efficacious, but it is also untethered from values in ways that make it problematic as an arbiter or source of ultimate authority. (Is genetic engineering good or bad? What about planetary geoengineering? Etc.) Politics hardly provides the consensus that’s needed, even in those places (like on the Left) where you might think it would be more shared.

My own working formula for navigating this debate goes something like this:

(1) We inhabit multiple worlds that are irreducible to each other, yet which today are entangled. The other worldviews and/or worlds with which we cohabit (inter-inhabit?) cannot be made to go away except through violence. The “how” of coexistence is therefore an issue.

(2) Mapping out their entanglement is difficult if not impossible without engaging with both science and politics, because these are integral to so many of their present entanglements. The question of how to engage them is therefore an issue.

(3) It is no longer possible to assume the innocence of any of these (science, politics, or any kinds of institutional players or perspectives). We must therefore negotiate by placing ourselves and our own perspectives at risk. (This has always been the case for some of us; now it is that for all. There’s no hiding, for instance, behind science, or behind some taken-for-granted understanding of liberal rights.) Everything is at stake in how we proceed. Yet proceed we must.

All of this puts me into the camp of the cosmopoliticals. Clark and Szerszynski seem to be arguing (though I’ll clarify it better when I’ve read more of the book) that this approach with its “earthly multitudes” is essential but incomplete. There’s something missing from it which has to do with the Earth itself, an Earth (not merely a “world”) that is itself inherently multiplicitous and self-differentiating.

I like this idea a lot (the Deleuzian in me especially likes it). But I need to think through exactly what it means: for science (which they draw on quite a bit) and for the “Earth-beings,” as Marisol de la Cadena calls them, whose relationship to science will (and can) never be fully articulated.

I should recognize that there are other ways to carve up this territory that don’t presume “science” and “indigenous ontologies” (or whatever we call the latter) to be the proper categories at all. (Elizabeth Povinelli’s “geontopolitical” carve-up, for instance, which Clark and Szerszynski occasionally cite, or Kathryn Yusoff’s work, suggest something a little different.) I’ll aim to address those in future posts.